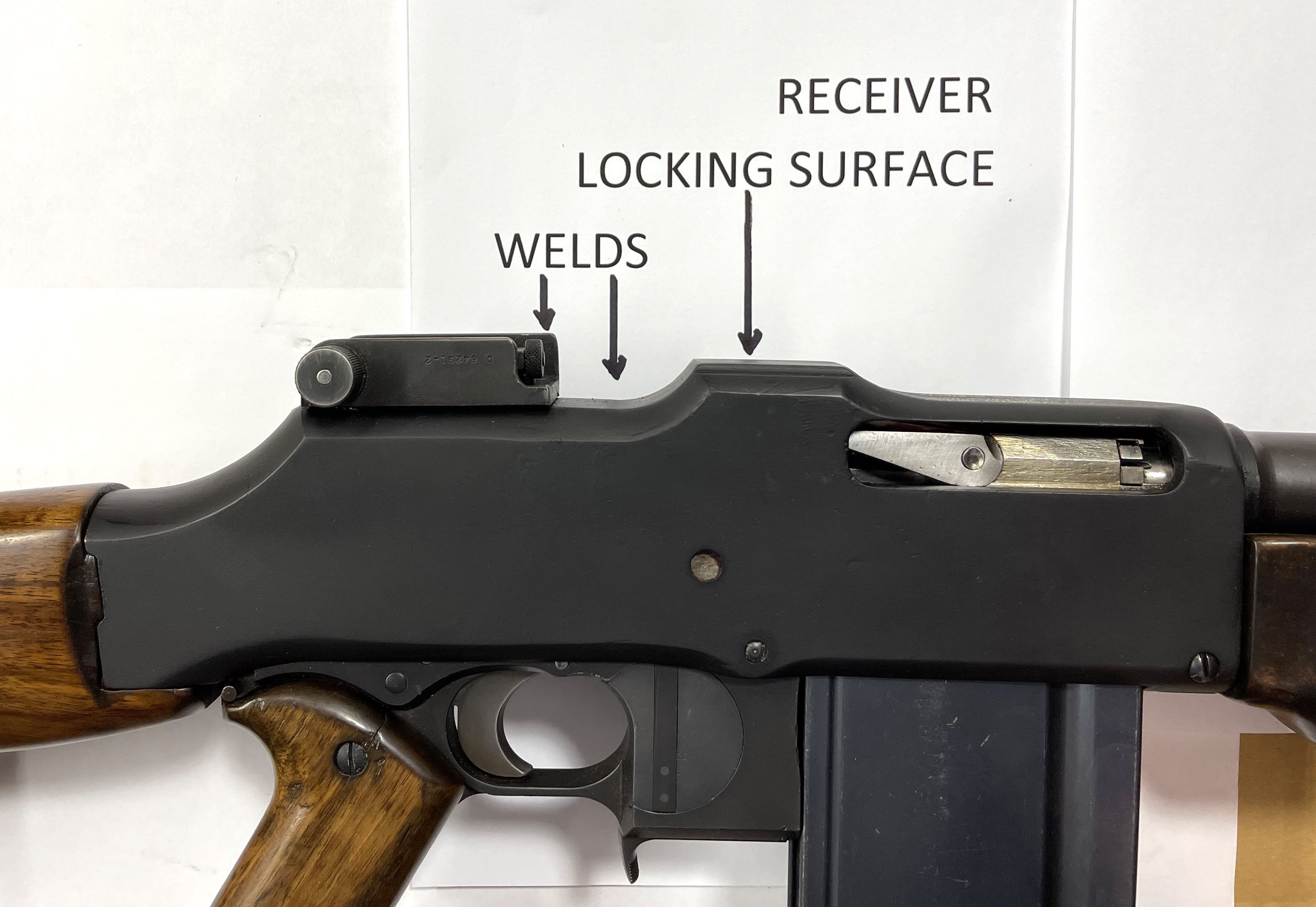 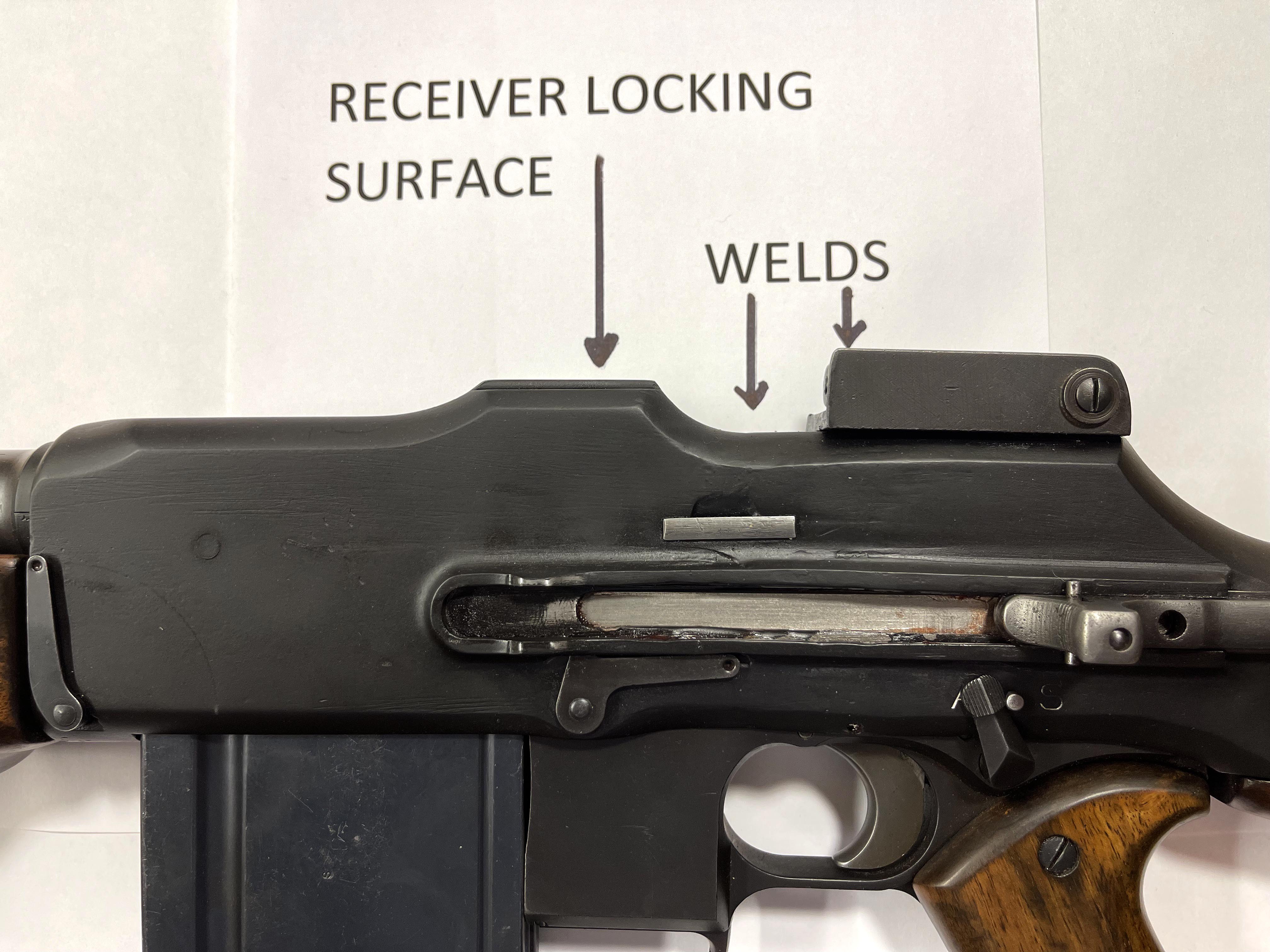 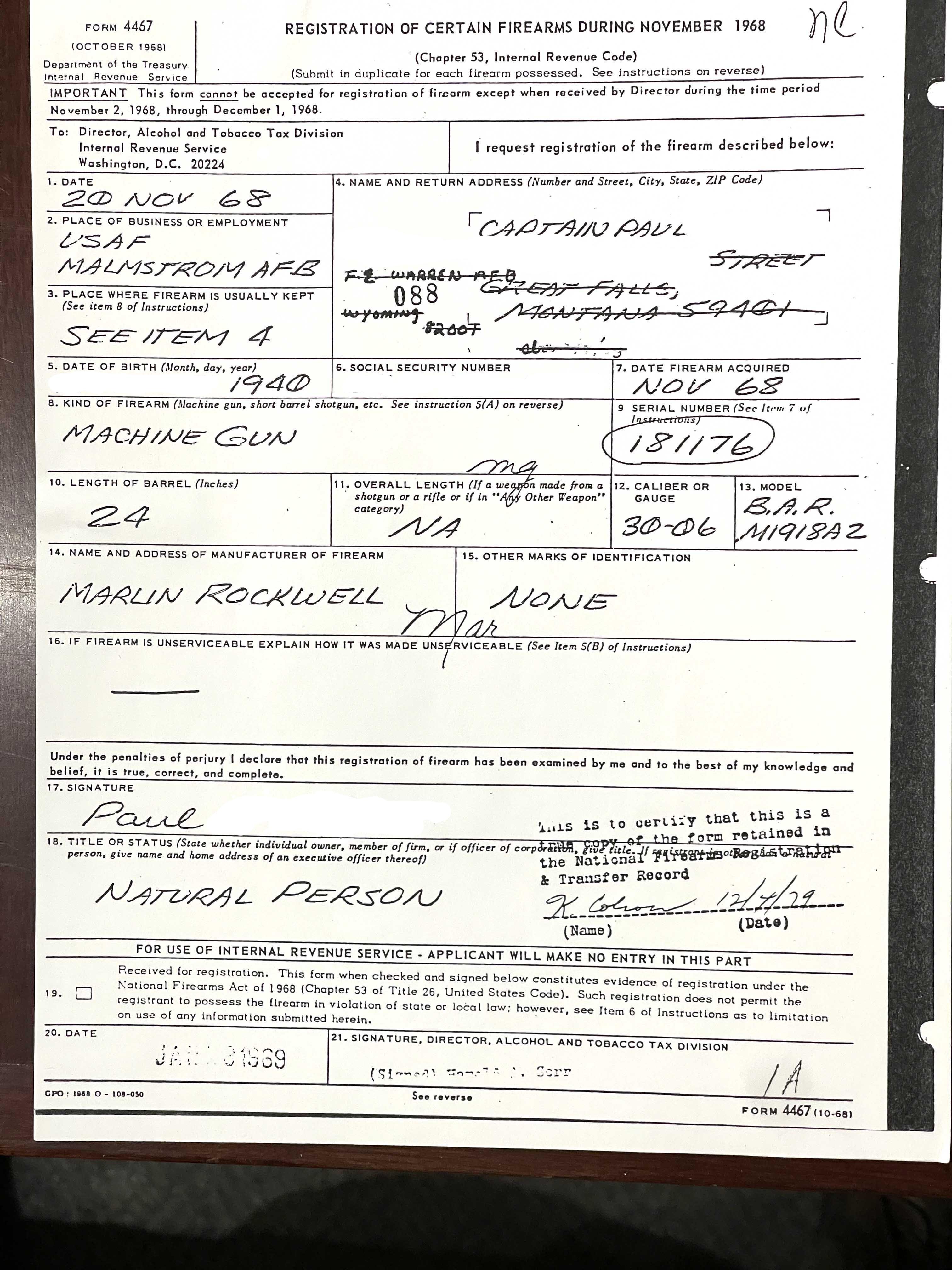 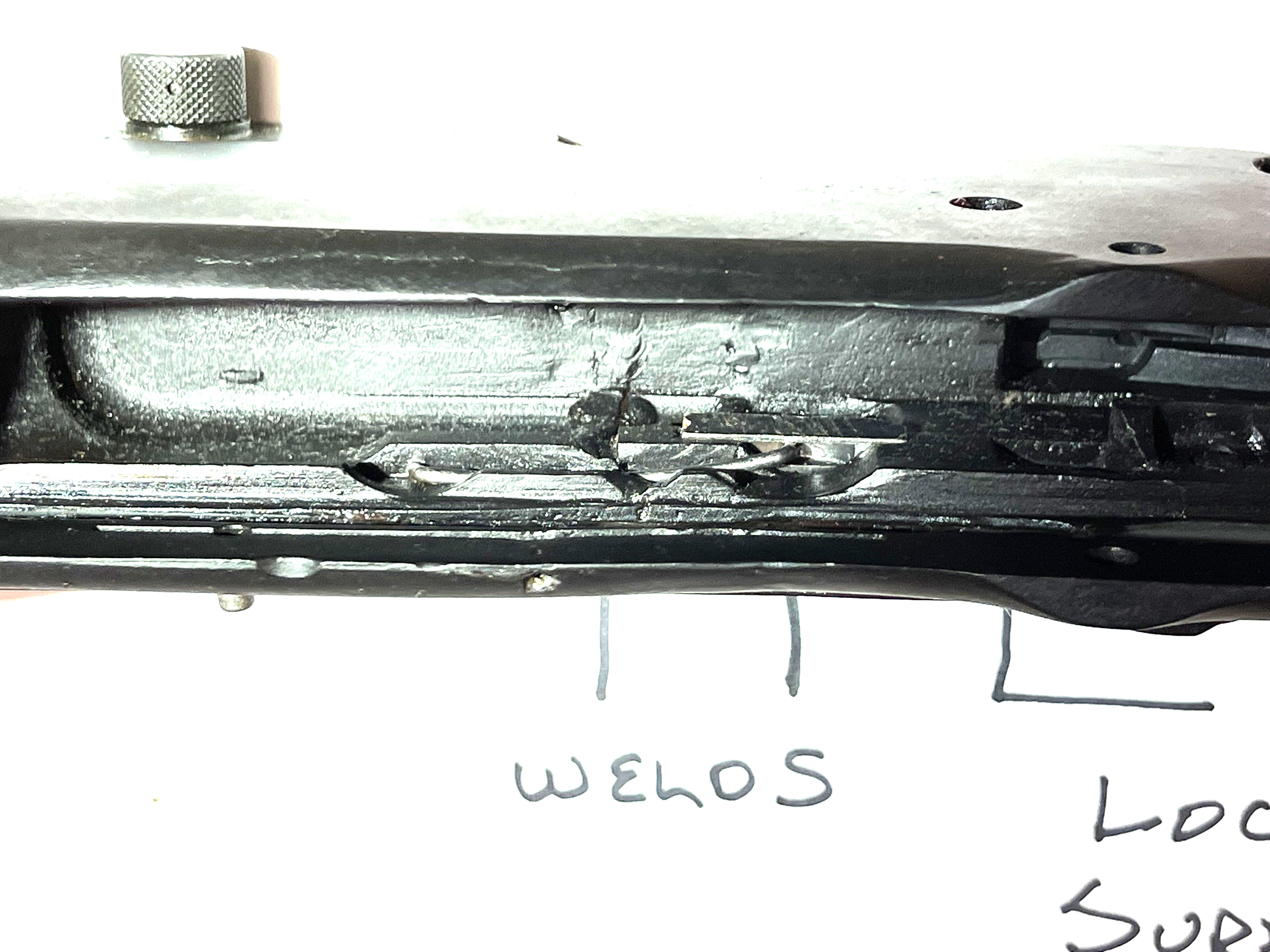 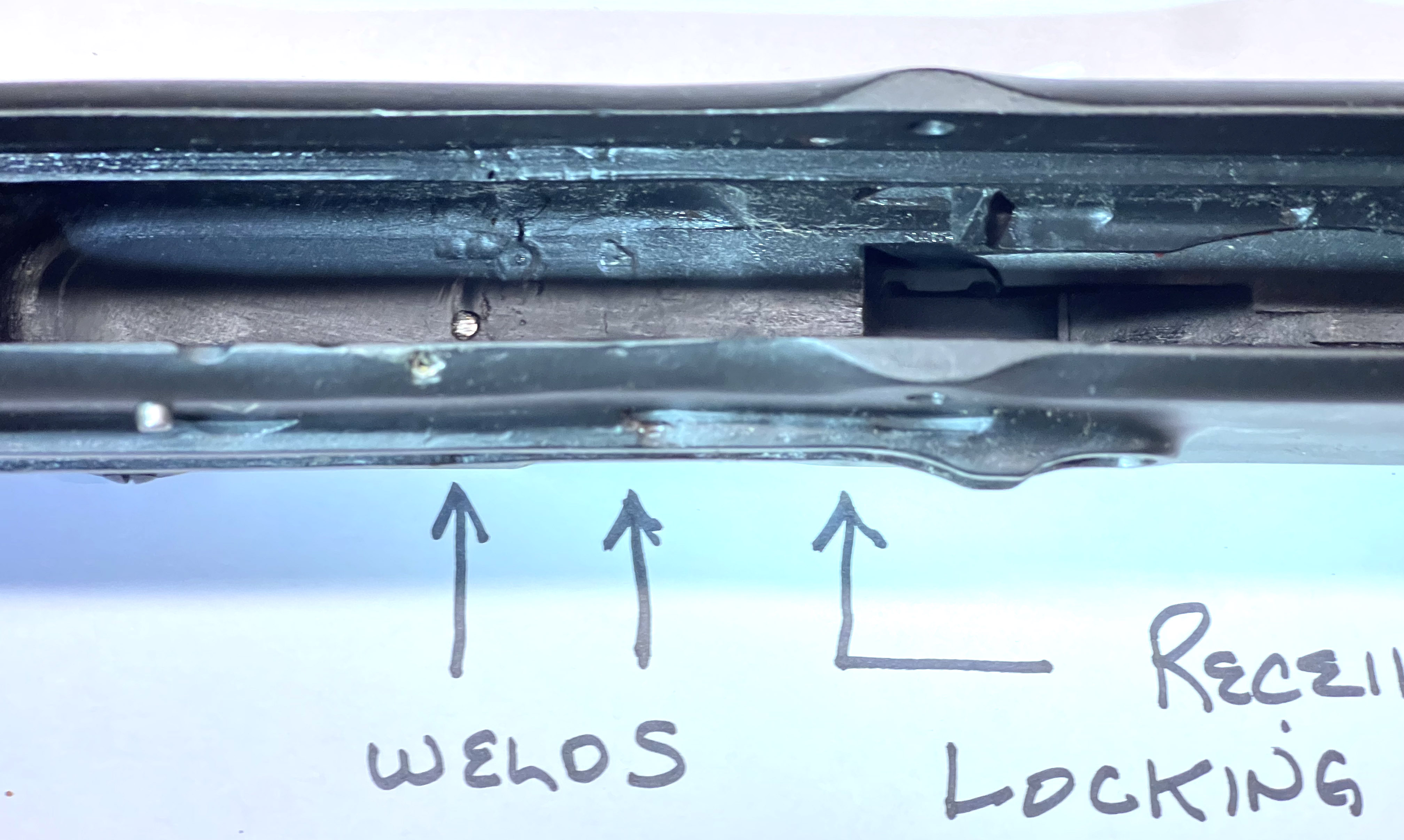 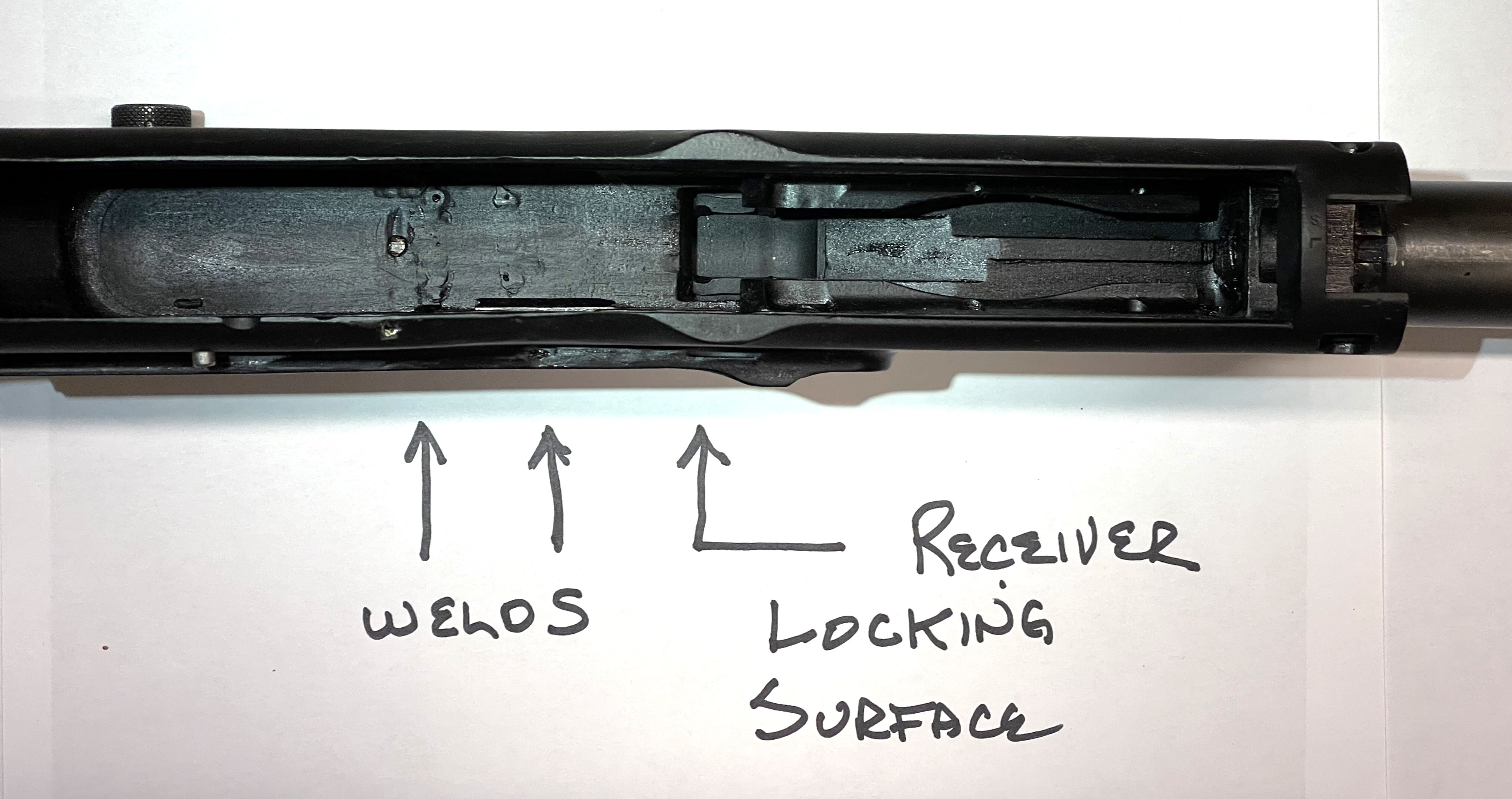 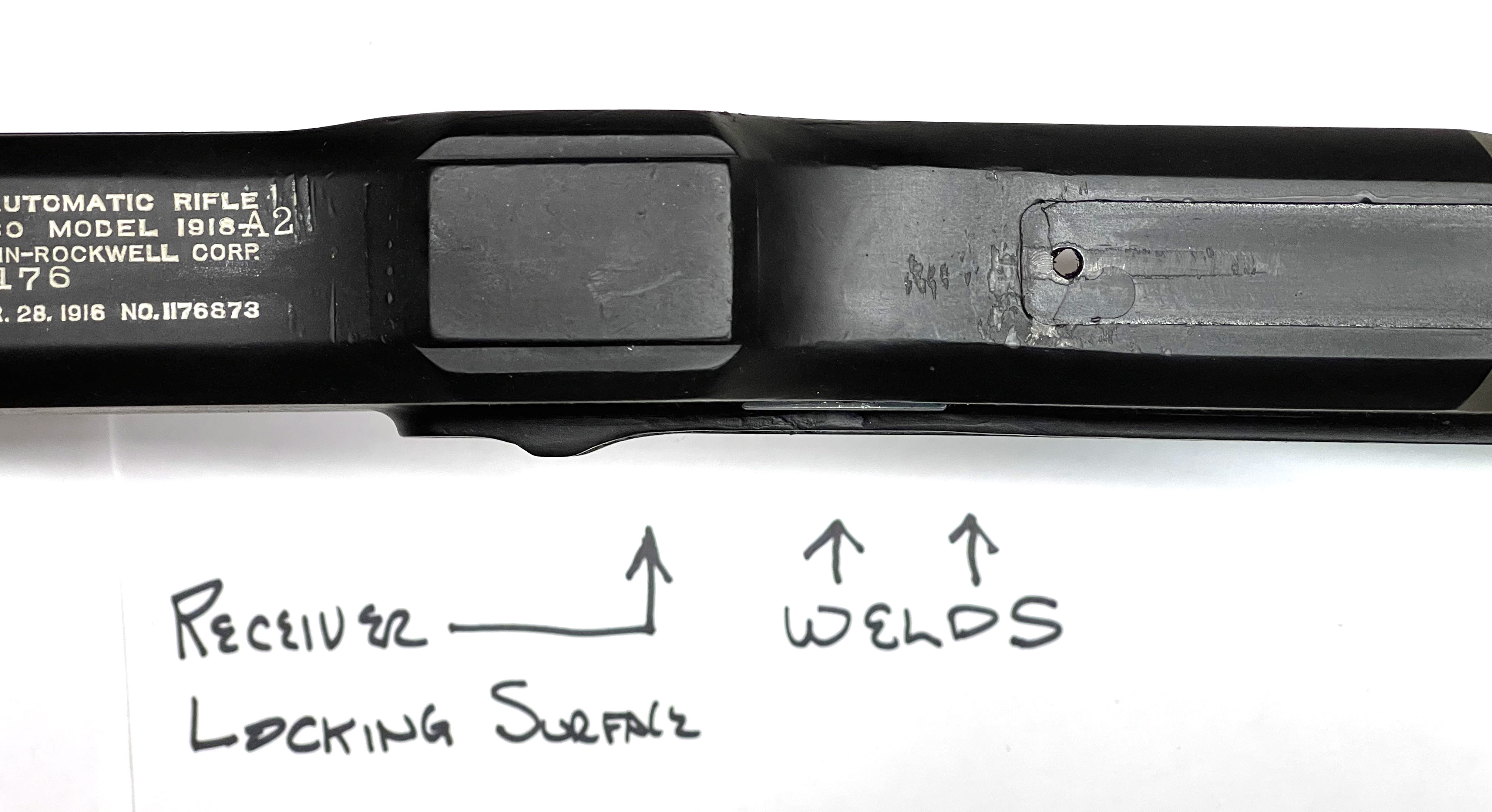 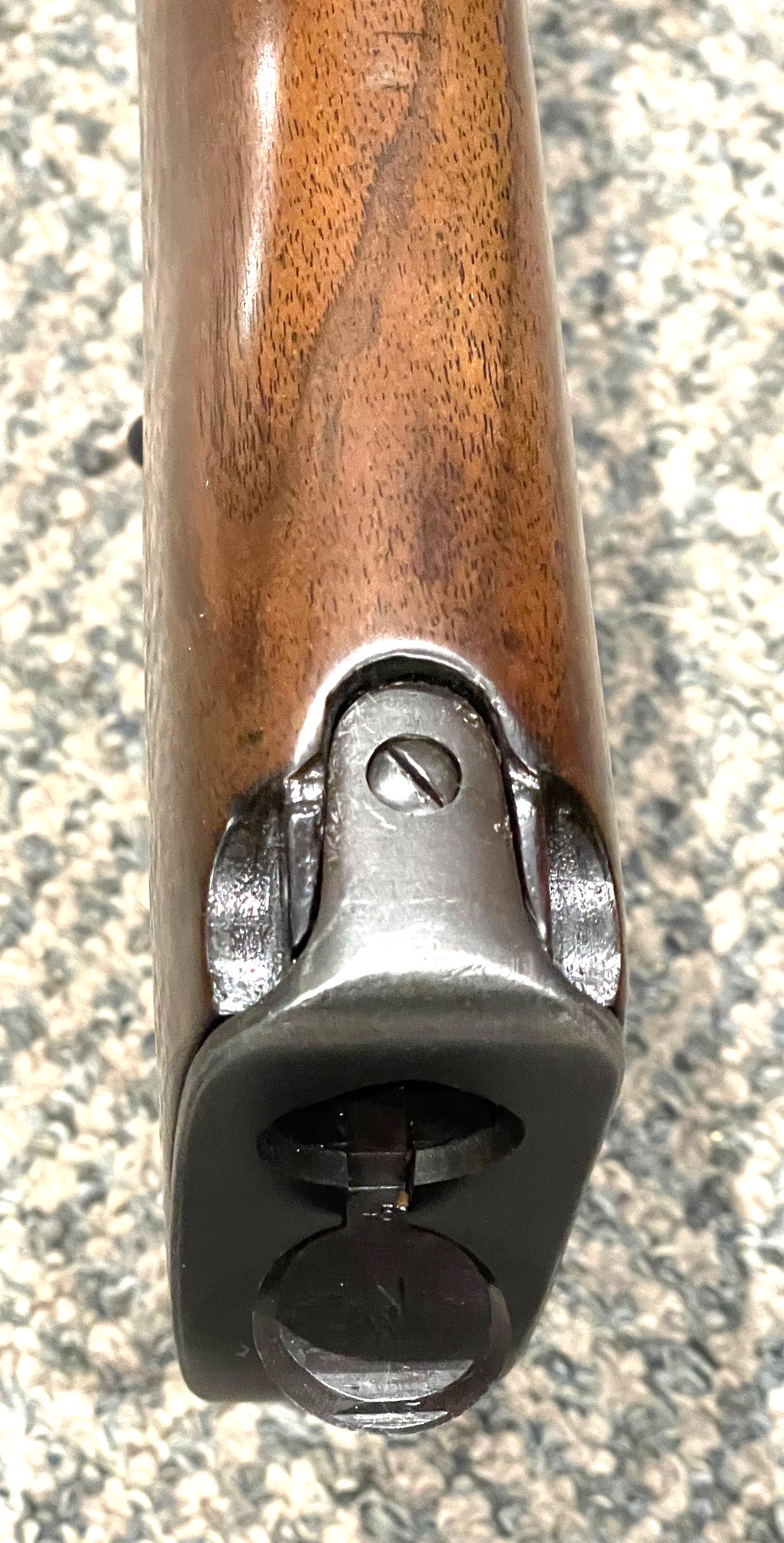 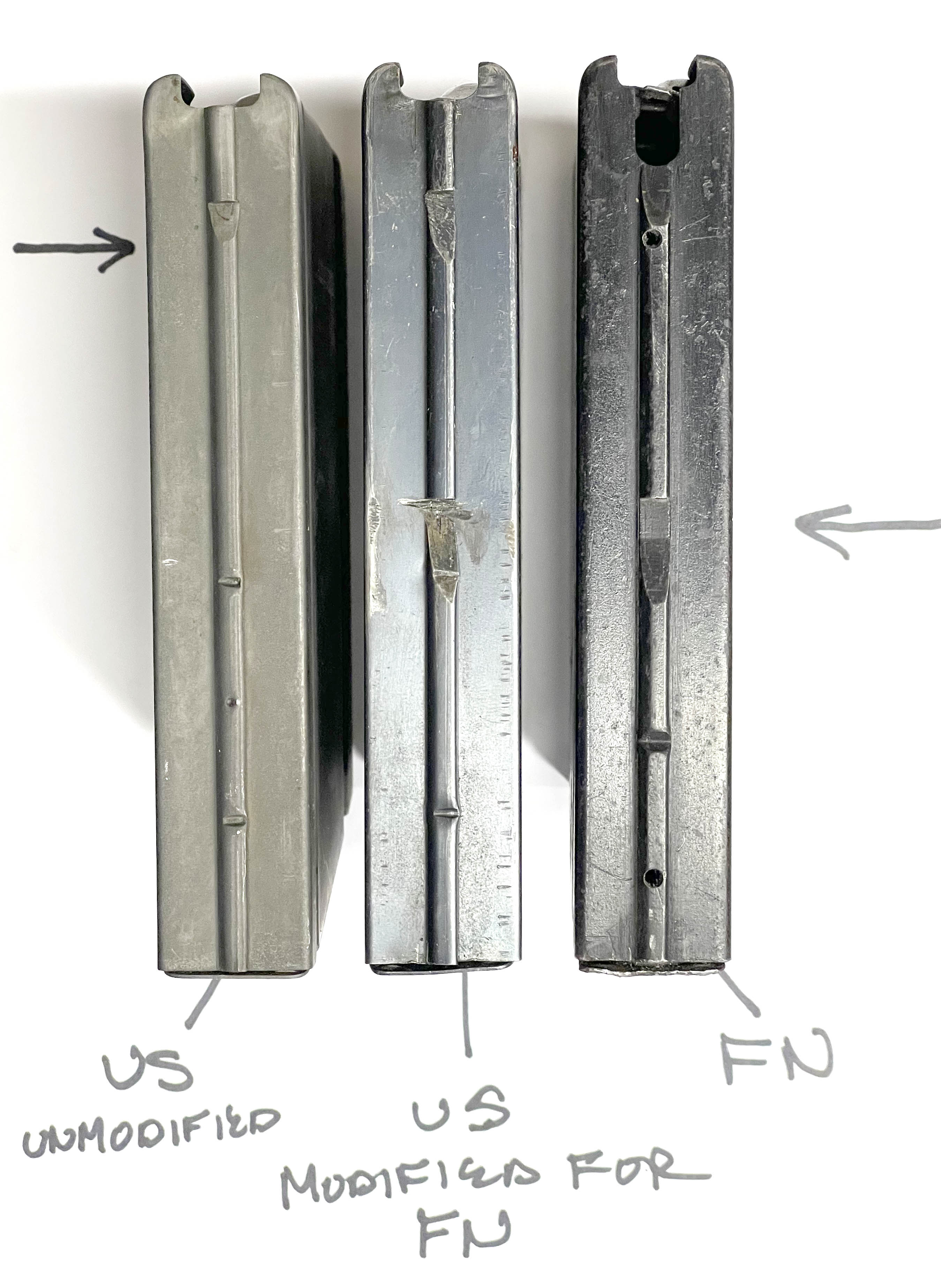 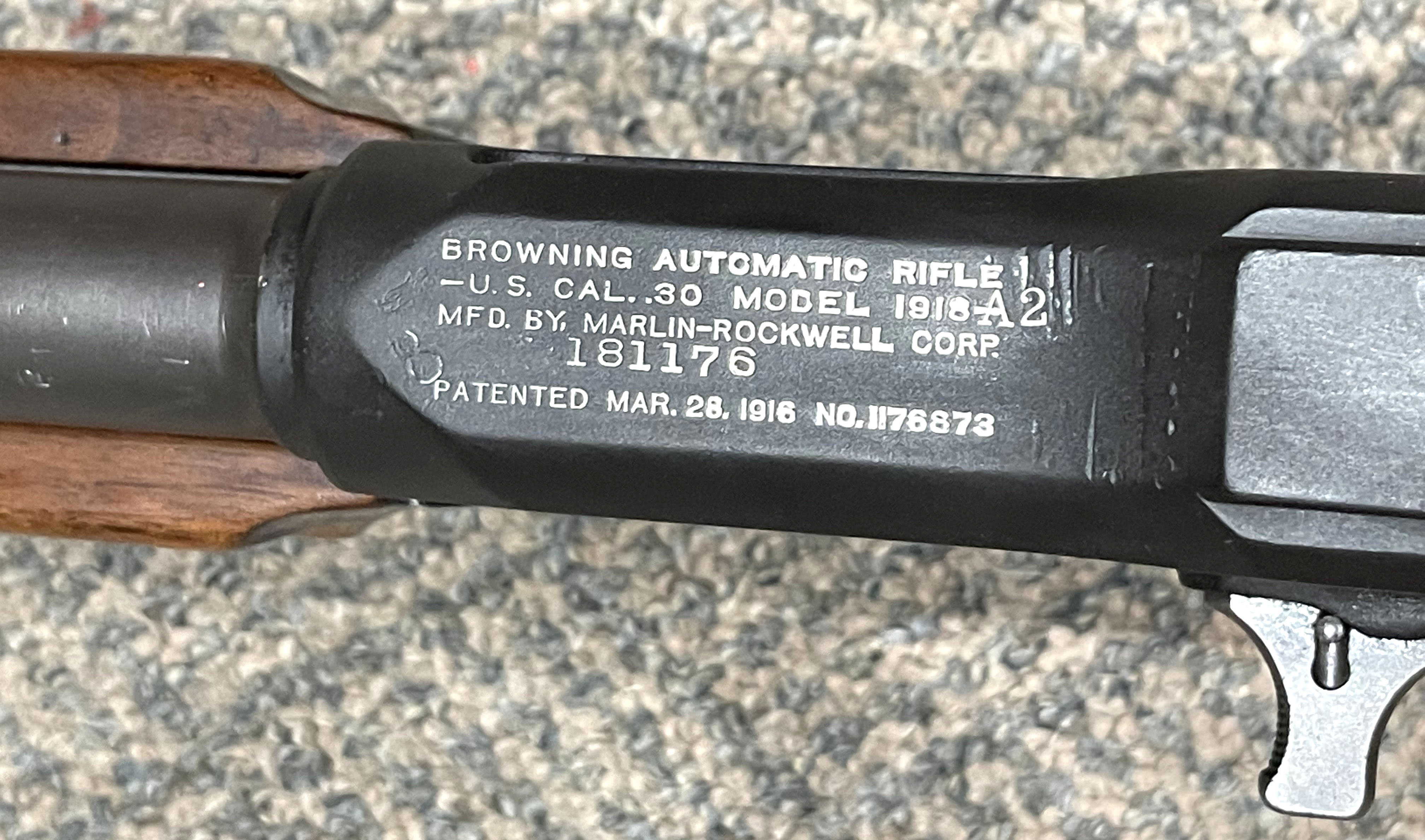 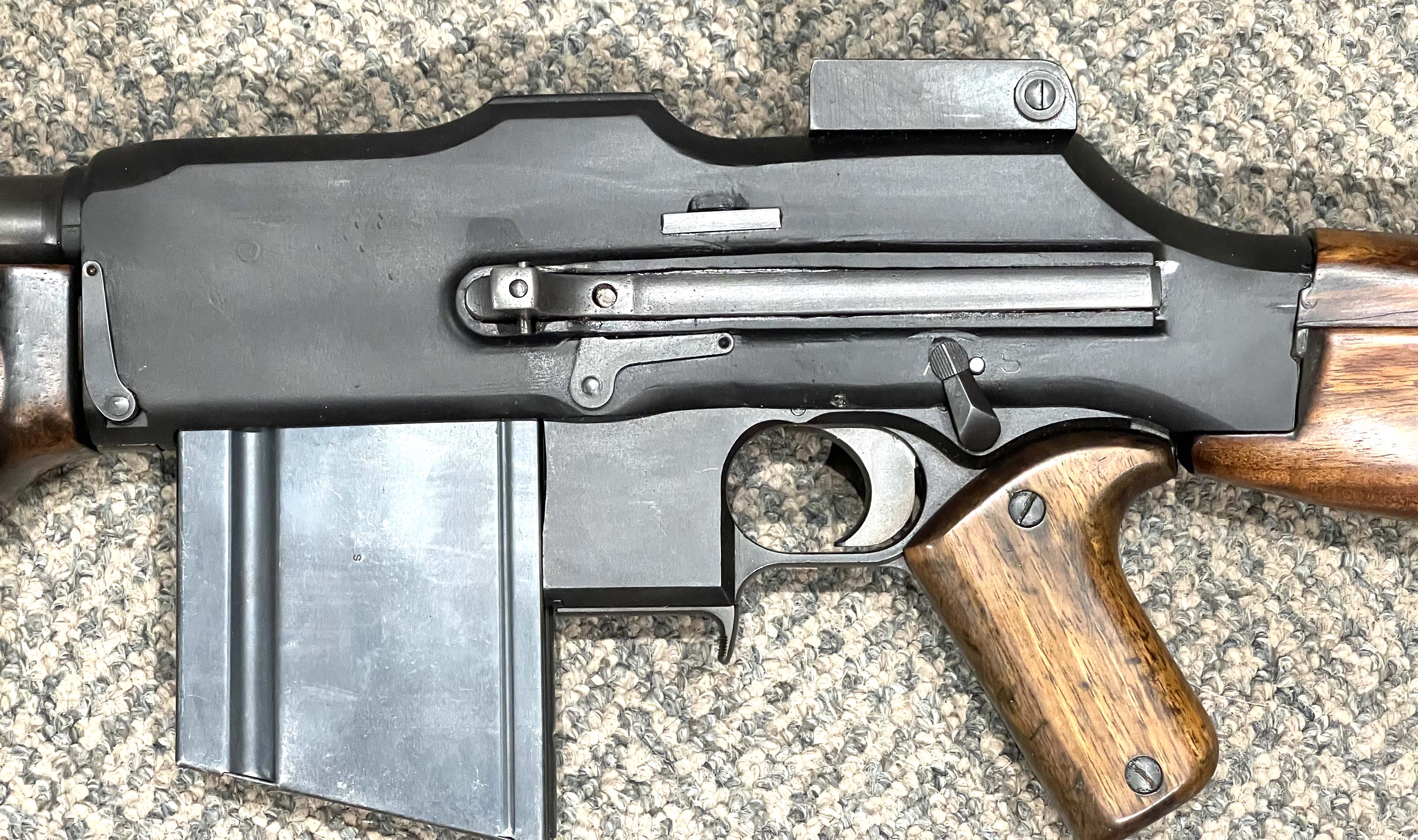 When COLT produced the R80 MONITOR Automatic Machine rifle in 1931, a lightened and shortened version of the Browning Automatic Rifle, only 125 were made.  The FBI received most of them and many orders from law enforcement agencies across the US went unfilled.   Today, for those few Monitors that were properly registered by 1968, there are numerous collectors willing to pay six-figure prices to add one to their collection.   Here is a fully-transferable alternative!

This BAR was originally a Marlin Rockwell 1918 Browning Automatic Rifle, later updated to a 1918A2 and so marked on the receiver. Before 1968, the rear tail of the receiver was cut off, leaving the operational portion of the receiver intact.  This piece, from the forward edge of the receiver at the barrel threads, to a point behind the Locking Shoulder of the receiver, was not cut and remained a single piece.  When a BAR is fired, the Bolt Locking Surface is positioned in the Locking Recess, fully-against the Receiver’s Locking Shoulder, fully-locking the action, to handle the powerful 30-06 cartridges. The piece of the receiver tail that was cut off, does not contribute to the locked strength of the receiver, but does support the bolt in its rearward movement after each shot.   The cut edge of the receiver was squared off and two receiver pieces were fit and welded to it, to reconstruct the BAR receiver. Yes, this BAR receiver is not as desirable as an untouched, transferable WWI example, but this POOR MAN’S MONITOR would be more costly if it was based on an untouched receiver. Plus, THIS REWELDED, BARRELED, BAR RECEIVER WAS REGISTERED IN THE 1968 AMNESTY: MODEL 1918A2 BAR MANUFACTURED BY MARLIN ROCKWELL.  Examine the many photographs.  The barrel was shortened to 18 inches and has excellent rifling.  The CUTTS Monitor Compensator was obtained from Kent Lomont, who contracted with an engineering firm to reproduce six beautiful examples.  The pistol grip lower receiver is from a Fabrique Nacional BAR.  It shoots only is full-auto. The cyclic rate of the BAR is about 500  rounds per minute, slow enough to easily fire multiple bursts from a single 20 round magazine. The magazines need to be either FN BAR 30-06 magazines, or US BAR magazines with the FN magazine catch notch added.  See the magazine photo to best visualize this. Three magazines come with this BAR.  This BAR functions well and is a unique experience to shoot.  The Colt Monitor was a significant improvement for the BAR; the FBI recognized it and obtained most Colt’s production run as soon as they were produced. The photographs show the exterior surfaces of the where the welds are, and interior views of the welded areas. The receiver is finished in black Cerakote. $39,500, Fully-transferable.  Transfers to your dealer promptly by eForms.  For questions or to purchase this POOR MAN’S MONITOR, call (575) 405-0911 or email sales@fullautoclassics.com. Will consider older machineguns, even if not functioning properly, as long as they are properly registered, and older COLT firearms in exchange.  Thank you!