The XD-M Elite line of pistols is what I would describe as the cream of the crop striker-fired full-size pistols offered from Springfield Armory. The XD-M Elite line has certain characteristics home to it, like removable flared mag wells, optics-ready slides, their match META trigger, and a unique grip texture.

We at GunSpot were excited to get a hands-on look at the gun prior to its release date of the pistol. The pistol was sent to us by Springfield along with some boxes of ammo sent by True Shot, an online ammo retailer. Upon looking at the pistol, there are some noteworthy physical characteristics to this weapon.

First of all, here are the product dimensions:

The gun has some good size to it for sure, putting it in that full-size duty range of pistols. 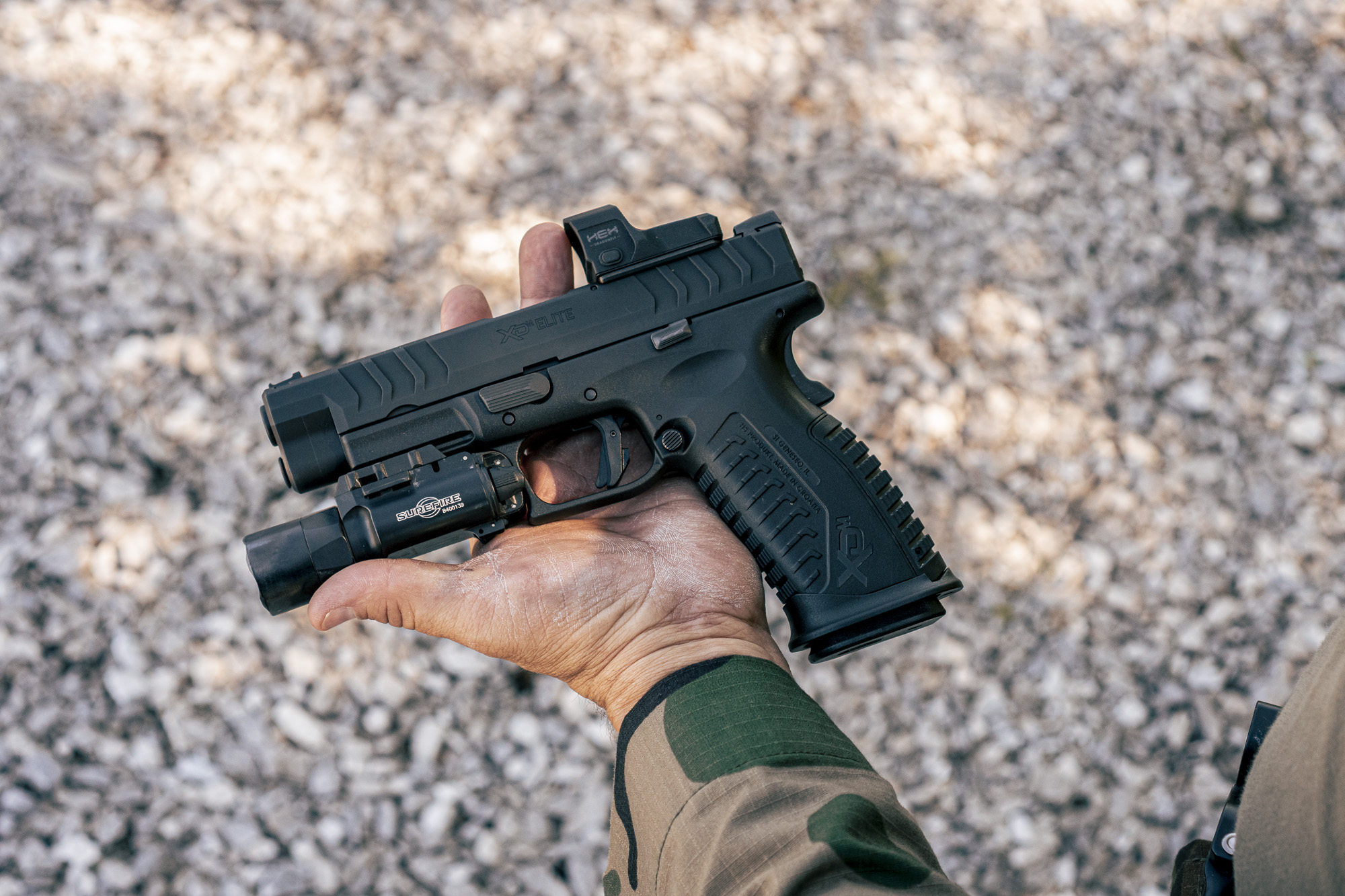 The handgun has a polymer frame with a 1913 rail along the bottom of the dust cover with three grooves that should be able to accommodate any pistol accessory you could possibly want. We opted to put a Surefire X300 on ours. The frame has a grip texture added on just about any place you would want it. There is a chunky, scale-like texture along with the pistol grip. This texture is found on the front, sides, and back of the pistol. On the bottom of the grip, there is a "short" magwell added by Springfield Armory. This Magwell is shorter in length compared to the flared magwells found on the XD-M precision and OSP models. This creates an all-around shorter gun in height but still lets you have an ample flare to easily seat magazines into the pistol. Speaking of the magazines, this gun ships with two magazines and both of them have a sixteen-round capacity allowing you to have 16+1 for carrying. That is a stellar capacity for a pistol in 10mm.

The slide of this weapon is created from forged steel and is melonite treated. The slide comes from the factory optics ready milled with the Springfield Standard optic footprint. With this footprint, you will be able to attach any mainstream red dit optic in today's market. The gun will come already equipped with standard height iron sights. The rear sight is a U-notch sight which is nearly identical to the rear sight on the Hellcat models. The front sight, however, is a red fiber optic post. The slide has machined rear and front cocking serrations. This will make functions like charging and press checks easier. On top of the ejection port area of the slide, there is also a loaded chamber indicator. When a round is present in the chamber, the indicator will be raised above the height of the slide. When in the loaded position, the indicator can be felt or visually seen with your eyes by observing the area.

The XD-M Elite line of pistols is especially kind to left-handed shooters, and this pistol is no different. The XD-M Elite 4.5" 10mm pistol has mag release buttons on both sides, and it also has a slide stop on both sides of the frame as well. Left-handed users will be able to drop mags and release their slide from slide lock with ease and without doing any extra work switching stuff over from a factory configuration. This is also a great tactical feature that supports shooting from either hand around cover and concealment. This is no doubt featured in the XD-M line because this family is the most tactical series in the XD family.

To test out the XD-M Elite, we acquired three different self-defense pistol rounds with the help of True Shot Ammo. We took each of these three loads and used them to test the pistol's performance. We particularly looked at what kind of accuracy it has and the velocity we could achieve from the 4.5" barrel.

For our defensive ammunition, we used three different loads from three different manufacturers. Our first load was PMC Bronze ammunition. The grain weight of this load is 170 grains and has a jacketed hollowpoint for the projectile. Our second load was Winchester DEFENDER 180 grain with a bonded jacketed hollow point. The third entry was one we were very excited to have in the mix; it provided some spice in the equation for sure. The last ammo choice was Doubletap 125-grain ammunition with a full copper projectile. It probably goes without saying that 125 grain is unusually light for 10mm ammunition, and as a result, it's pretty darn fast.

The test parameters for accuracy were pretty basic, and the effort was made to, of course, remove as much human error as possible. I fired all of my shots from fifteen yards away on a bench with a lead sled for support. From there, I shot four three-round groups with each ammunition. Something to mention is that if I had to place my pistol shooting skill level somewhere, I'd place it somewhere in the above-average level; I'm not a master by any means. I only rate myself at the above-average level because I've seen just how bad some flat-range shooters are. Yikes! In all seriousness, this pistol will outperform me on my best day, especially at fifteen yards. 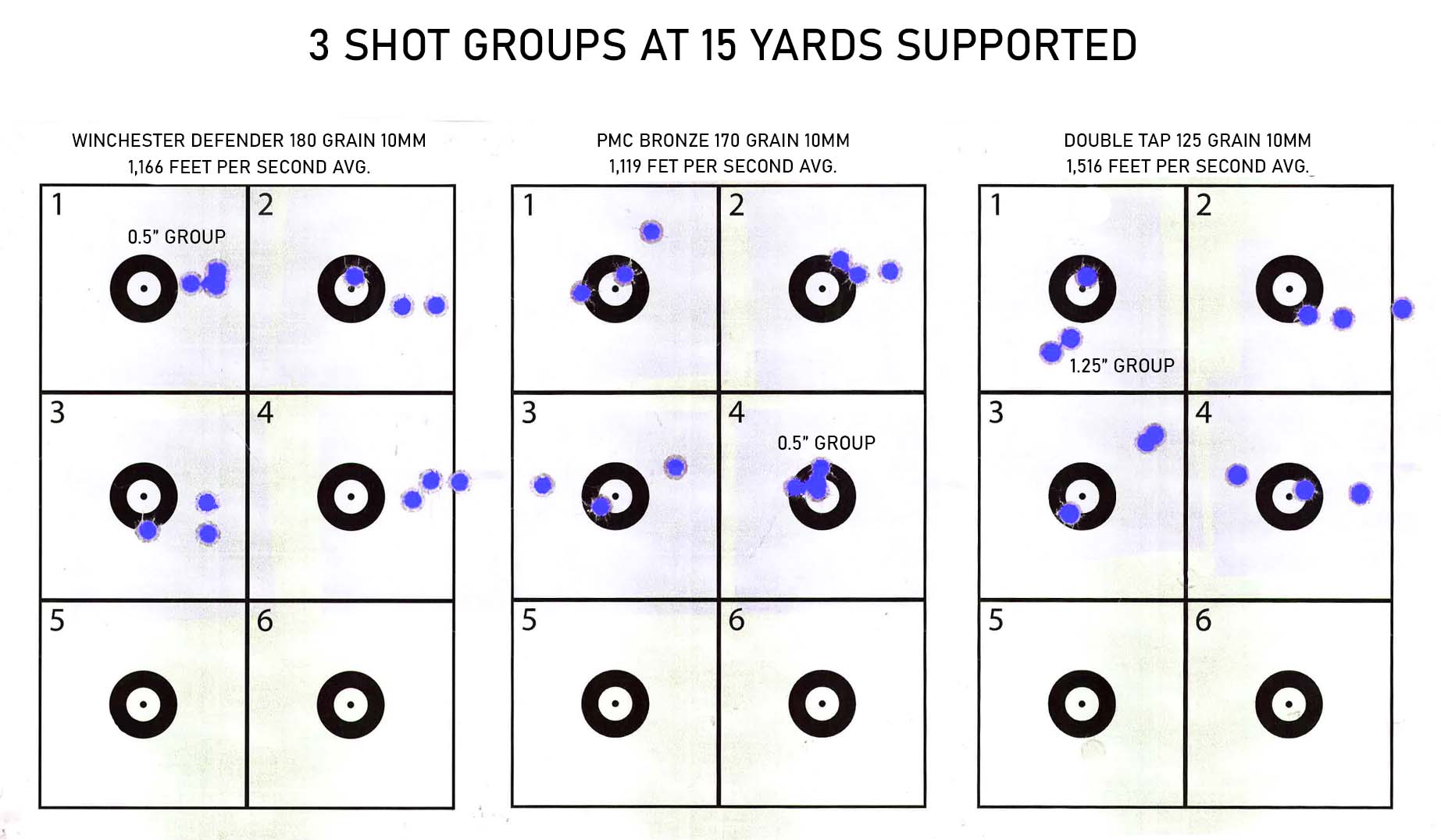 The first groupings I shot were of the PMC 170-grain ammo. The PMC performed really well, with my tightest group being a half-inch group. My worst group using that ammo was two inches, with my other two groups being an inch and a half and then a one-inch group.

The last grouping test was done with the Doubletap 125 grain 10mm. These are the worst groups I produced, with my best being an inch and a quarter. My worst two groups were just under two inches.

Altogether the XD-M Elite shot well, and I have no doubt the slop in my groups is related more to my human error and possibly slightly ammo related. At 15 yards, I don't doubt the XD-M could shoot half-inch groups, or tighter, all day long in a lab setting with a robot pulling the trigger. The point is the accuracy is inherently there inside the gun as long as you are up to the task.

We took the same ammunition and performed some tests with a chronograph to see what kind of velocity we could get out of the 4.5" barrel. For this test, we set up the chronograph on a tripod on a cloudy day, which usually yields the best results. Then we stood seven yards away from the chronograph and proceeded to fire. For each ammo choice, we fired five rounds and took an average of five shots. The chronograph was set to measure in feet per second.

No doubt this gun and ammo pack a punch, enough to fend off anything located on the North American continent for sure. 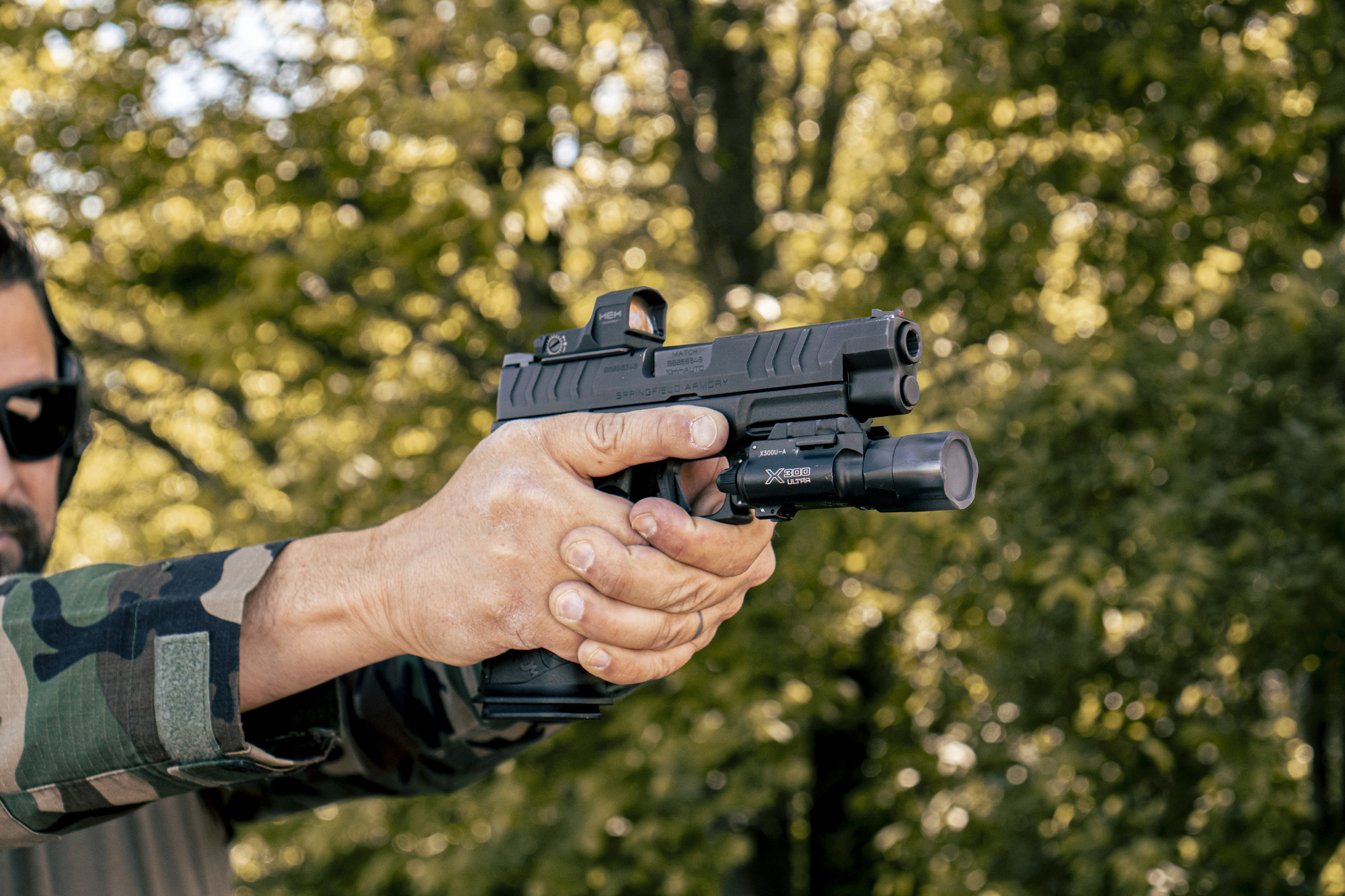 Our GunSpot team was able to provide a unique perspective on this gun from two different views. Dylan and Grant both shot the pistol; for Dylan, it was the first 10mm he had ever shot, while Grant, a more experienced shooter, has shot most of the calibers in the gun world. The conclusion amongst the team was that this gun handles the 10mm recoil pretty easily. If you watch the video above, you can see in the slow-motion footage how well Grant handles the recoil when firing, with the red dot returning each time nicely. The pistol has a great trigger, to be exact; It has a flat-faced META trigger (Match Enhanced Trigger Assembly) with a crisp break and an integral overtravel stop. The gun has an amazing capacity to go along with it also. Add in the option to add a red dot, and you have the total package in a high- pistol.

Who is this gun for?

If you love bigger bored, high-powered pistols, or you outright love 10mm, I'm sure you will love this gun. Especially if you are already a fan of the XD-M line, in practical use for this pistol, it'd be fantastic as a sidearm for those of you in parts of the country where game animals are large. Going up against a raging moose, bear, elk, or cougar with your Hellcat would not be as favorable as packing the punch this bad boy does. If you are hiking or backpacking in those territories, this could be a good investment and a reasonably cheap one at that. The MSRP of this gun comes in at just $653 dollars which means that the street price could be seen lower possibly. Remember, though, that every gun on the market yields bad results if you are not training with it. To master this gun and the 10mm, you will need to invest time, effort, and money into being the best that you can be with it; that way, should a situation arise where you have to defend yourself, you'll be ready.