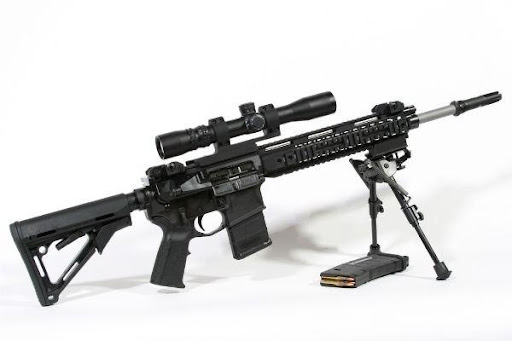 The Origin of the AR15

The Origins of America’s Rifle- The AR15

The AR15 has become one of the most popular rifles in American history, earning its place in history alongside the likes of early Revolutionary era muskets, Wild West lever action rifles, and the M1 Garand. It has become ubiquitous with modern American gun culture due to its rapid proliferation following the sunsetting of the 1994 Assault Weapons Ban in 2004. But you may have wondered where the story began with America’s Rifle, and it started in the R&D section of a 1950’s gun manufacturer called Armalite.

The Need for a Change

The AR15 was born out of necessity in the face of the world’s other most ubiquitous rifle. Mikhail Kalashnikov’s infamous AK47. Coming out of the jungles of the Pacific Theater’s jungles and the European fields of battle during World War II, new standards needed to be achieved in warfare’s most basic requirement; an infantry platoon’s ability to gain fire superiority. In order to achieve that fire superiority, the US military wanted an all-in-one GI weapon that could replace nearly all of its World War II and Korea infantry weapons. This meant replacing the M1 Garand, the M1 Carbine, the Browning Automatic Rifle (BAR), the M3 and M3A1 “Grease Gun,” and the Thompson Submachine Gun in one fell swoop.

While in today’s gun culture, precision and ballistics are second nature to us. We now understand, based on extensive testing both professionally and recreationally as a hobby, that different caliber pistol and rifle rounds act in unique ways. A change in one aspect of the round can dramatically alter the flight path and effective range of that round. But back in the early decades of the 20th century, studying these ideas was a new science in itself. The findings ran contrary to popular thought at the time. Whereas the military had used .30 caliber rifle ammunition, specifically the .30-06 in the M1 Garand, the finding of the testing showed that while the range of such a large caliber rounds out of a lengthy rifle such as the M1 Garand, practical effective range rarely exceeded 300 meters. It was also determined that rifles generally were most effective at a range of only 120 meters and that most kills took place within the 100-meter range. The biggest shock of these studies was that the most effective round suited to the task was smaller caliber, higher velocity rounds.

First Attempt at a New Rifle

Not willing to accept that a smaller caliber was better, the US Army attempted to recreate the M1 Garand in a fully automatic capable rifle, thus the 10 pound, 44-inch-long M14 was born. The M14 fired the newly standardized 7.62x51mm NATO round, also known at the .308 Winchester. Problems arose as the first advisors and soldiers on the ground in Vietnam began voicing their concerns about the ability of the M14 to gain that necessary fire superiority against a force armed with the AK47 in the looming jungle warfare fight that was ramping up north and south of the 19th Parallel.

When the US Army decided on the M14, it was not the only weapon in contention for the job. In the 1950’s Armalite, the newly formed firearms company from the Fairchild Engine and Airplane Corporation recruited an airplane engineer named Eugene Stoner to help design a new rifle made with lighter and stronger materials. The first iteration fired the same 7.62 NATO round as the M14, but unique design features allowed for better recoil management in a lighter framed rifle, weighing around 7 pounds. A newer version modified the AR10, utilizing a high velocity .22 caliber round, capable of being highly controllable even on fully automatic mode, and was renamed the AR15. The biggest selling point when comparing the M14 with the new AR15 is the overall weight. An M14 and 100 rounds of ammunition burdened an infantryman with 17 pounds of gear, whereas that same infantryman could carry 280 rounds of ammo when carrying the same weight with the AR15. Regardless of these statistics, the US military was slow to adopt and so Armalite sold the rights of the AR15 to Colt. Still receiving pushback from the Defense Department in support of the larger caliber M14, the AR15 was eventually first officially adopted by the US Air Force, thanks to than Air Force Vice Chief of Staff General Curtis Lemay.

The AR15 Is Officially Adopted

After the US Air Force started getting the AR-15 into the hands of its Airmen, and thanks to input from Defense Secretary Robert McNamara, by 1963 the AR15 was pressed into service and redesignated the M16. Later iterations which included a forward assist on the upper receiver would later be designated the M16A1. After further modifications to the ammunition standards and barrels, which both caused nearly catastrophic results while in the hands of US servicemen in Vietnam, nearly 50% of all M16s were malfunctioning in Vietnam.

But by 1968, the US military started to implement the necessary changes to the weapon system, chrome lining the barrel and chamber, and returning to ammunition that did not burn so hotly as the initial ammo modifications were apt to do. The cyclic firing rate was also reduced to prevent extensive overheating. Higher-strength 7075 T6 aluminum receivers were also changed back to the original Eugene Stoner design, scrapping the weaker 6061 T6 aluminum that was prone to corroding, especially in the hot and humid environment of Vietnam.

The biggest issue of all with the M16/M16A1 centered around the changes to the ammunition from the intent of the weapon’s initial design. The rounds with the hotter burning powder were prone to humidity and would sometimes expand and swell, becoming useless. In the initial creation of the AR15, Eugene Stoner worked with ammunition manufacturers to create what was first called the .222 Special, later becoming the .223 Remington, and given the military designation of the 5.56mm Ball, or M193 round. After Vietnam, in the late 1970s NATO made the decision to switch from the 7.62 NATO round to a smaller overall standard rifle cartridge. With the help of FN Herstal making minor modifications to the cartridge, the 5.56x45mm NATO was officially born. Shortly after that, the US Marine Corps requested that their existing M16A1 rifles be adapted to accept the 5.56 NATO round. And thus, the M16A2 was also born. And with it the future of American warfare at its peak efficiency. If you would like to own your very own piece of American military history, you can find anything you could possibly need at Gunspot. Anything from AR15s to ammunition to accessories can be found there for all your shooting needs.