I almost didn’t want to do a video on the KRISS Vector at first because it is so popular, and everyone has done a video about one. That being said, I still did one. The Vector is so cool and so recognizable. I have used it myself in many video games. Also, the Vector we had in was Artic White, and it just happened to snow the night before our filming day, so naturally, I had to get the white https://gunspot.com/auctions/ending/ector out in the snow.

The KRISS Vector has evolved quite a bit since it first came out. Ours is a gen 1 Vector, which still has the original shape and folding stock. Today you can find them longer with modular rails. Many of them also now have buffer tube-type attachments instead of the original stock. Many cite this new stock system as being more comfortable during recoil; it’s also been said the forward handguard is better. That way, you can control the front of the gun with a C clamp-style grip. I like the original Vector the most.

One of the reasons why shooters welcomed the idea of an extended front on the Vector was to have a place to grip further from the weapon controls. Without a verticle foregrip on the underside of the Vector, it can be easy to push in the magazine release inadvertently or to hit the bolt stop; either of these would cause a malfunction of the firearm. Either it was unseating the mag or locking the bolt back prematurely. Again, I prefer to use the verticle grip, so it’s never been an issue for me, although if you wanted to hold the KRISS Vector differently, I could see it being an issue. 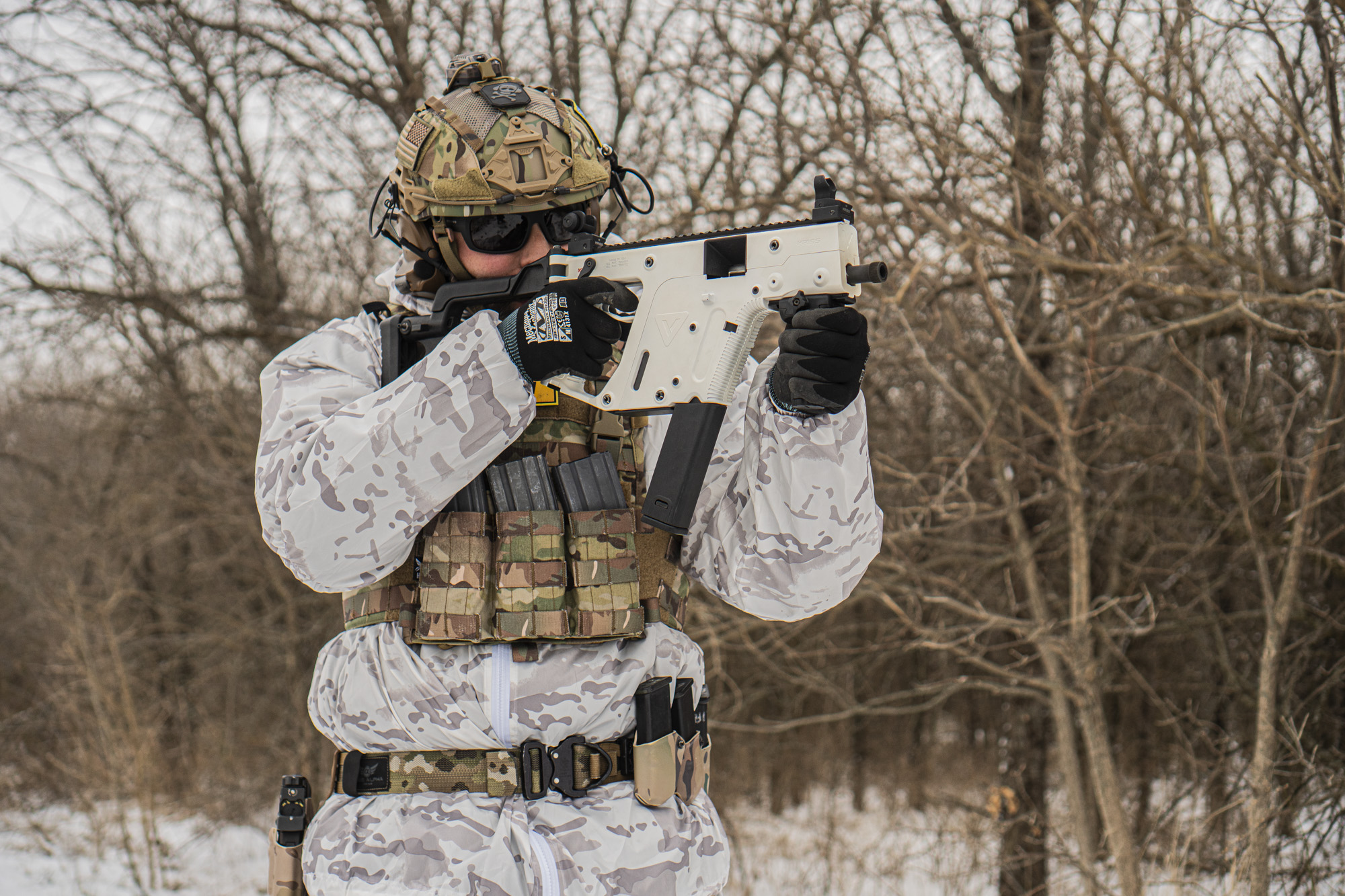 In the full video above, I cover swapping out mags in the video, also known as a tactical reload. I think this would be a challenge for many people with the Vector due to the controls and how long the magwell is, plus how long the mags are. For me, though, as a guy with larger hands, this is a non-issue. I can do it just fine; however, you might have a bit of a challenge if you have smaller hands.

I love the KRISS Vector; I and that gun have taken down many enemy camps in multiple Far Cry games. The Vector is most famous for the design of its bolt and how as it blows back, it actually hinges and blows back in the direction of the ground. This bolt was designed to mitigate muzzle recoil from the SMG. The full-auto version of the Vector will fire rounds at 1,200 rounds a minute. That makes it one of the fastest SMGs known to man, making it highly desirable. That and it’s always more controllable than the MAC 11 submachine guns, which also are documented at 1,200 rounds per minute. You can see some sweet footage of the KRISS Vector submachine gun in Larry Vicker’s video. Also, it’s a reason this gun usually kicks butt in video games. The KRISS Vector is very popular, and it’s easy to see why. The weapon has some remarkable ingenuity from an American manufacturer.

Side note: we filmed a Kel-Tec CQB video where many had issues with our accuracy test. Saying things like “you can’t rest a gun on a hard surface,” or “it was the ammo,” blah blah. I did the same test with the Vector, a PCC nearly the same length as a rifled barrel. Still at 30 yards, still in the prone, and still resting on a railroad tie, the same railroad tie. Honestly, it was about the same weather conditions. Again, all this is overkill to test the combat accuracy of a pistol caliber carbine at 30 measly yards in the prone. But we did the same test with the KRISS Vector in the video, and it passed with flying colors. This again leads me to believe our Kel-Tec CQB was just a lemon. Find the Kel-Tec Video HERE.