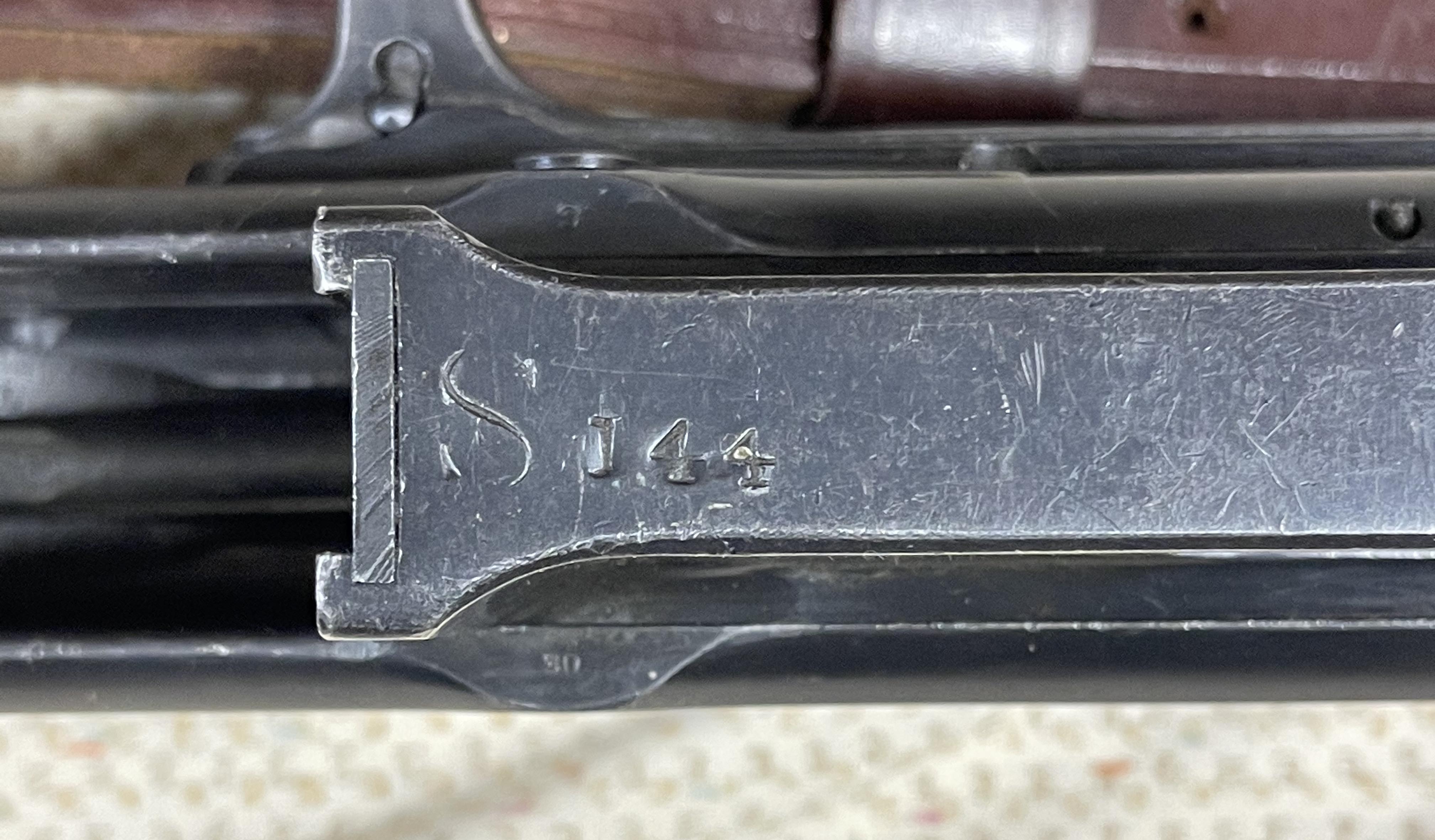 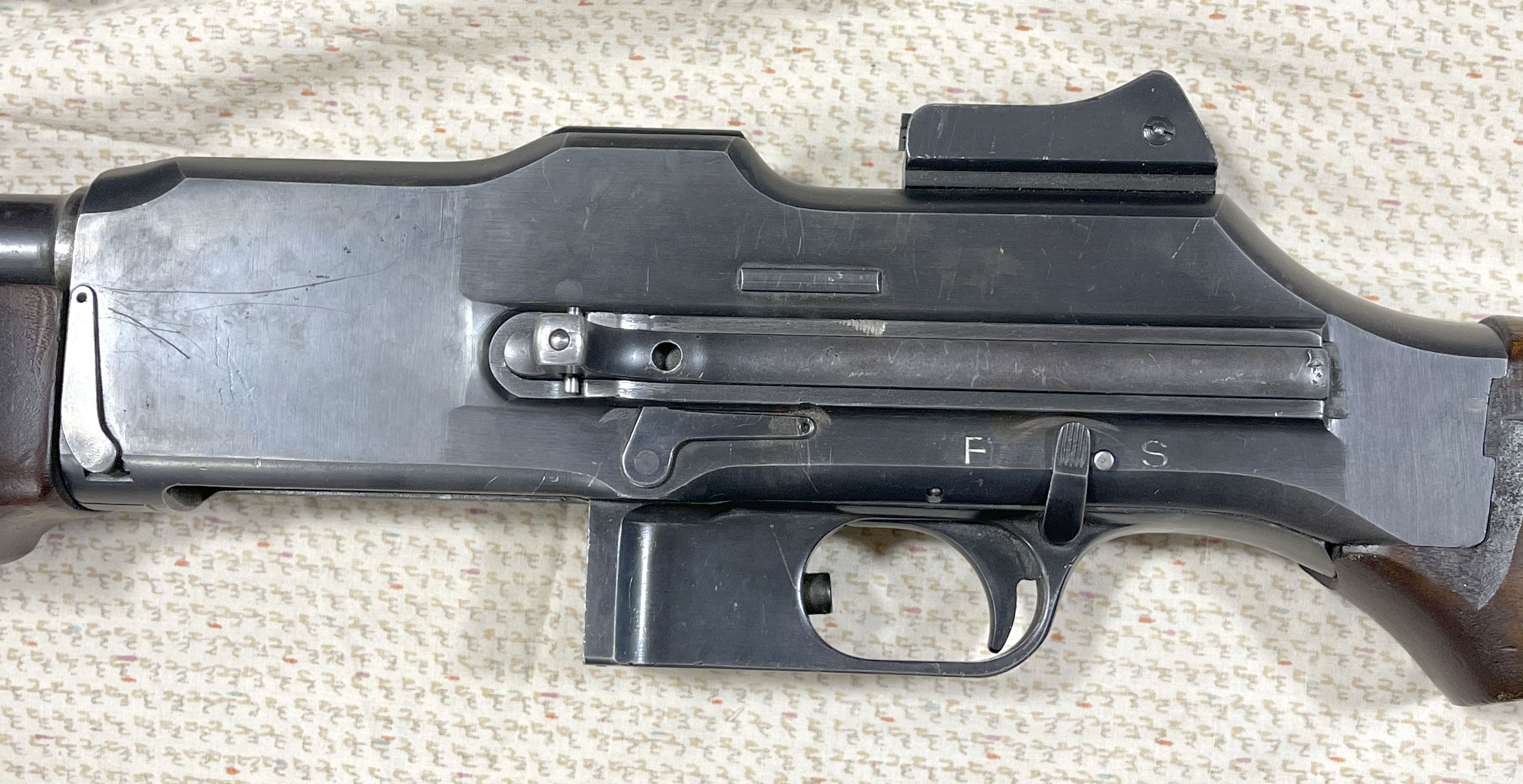 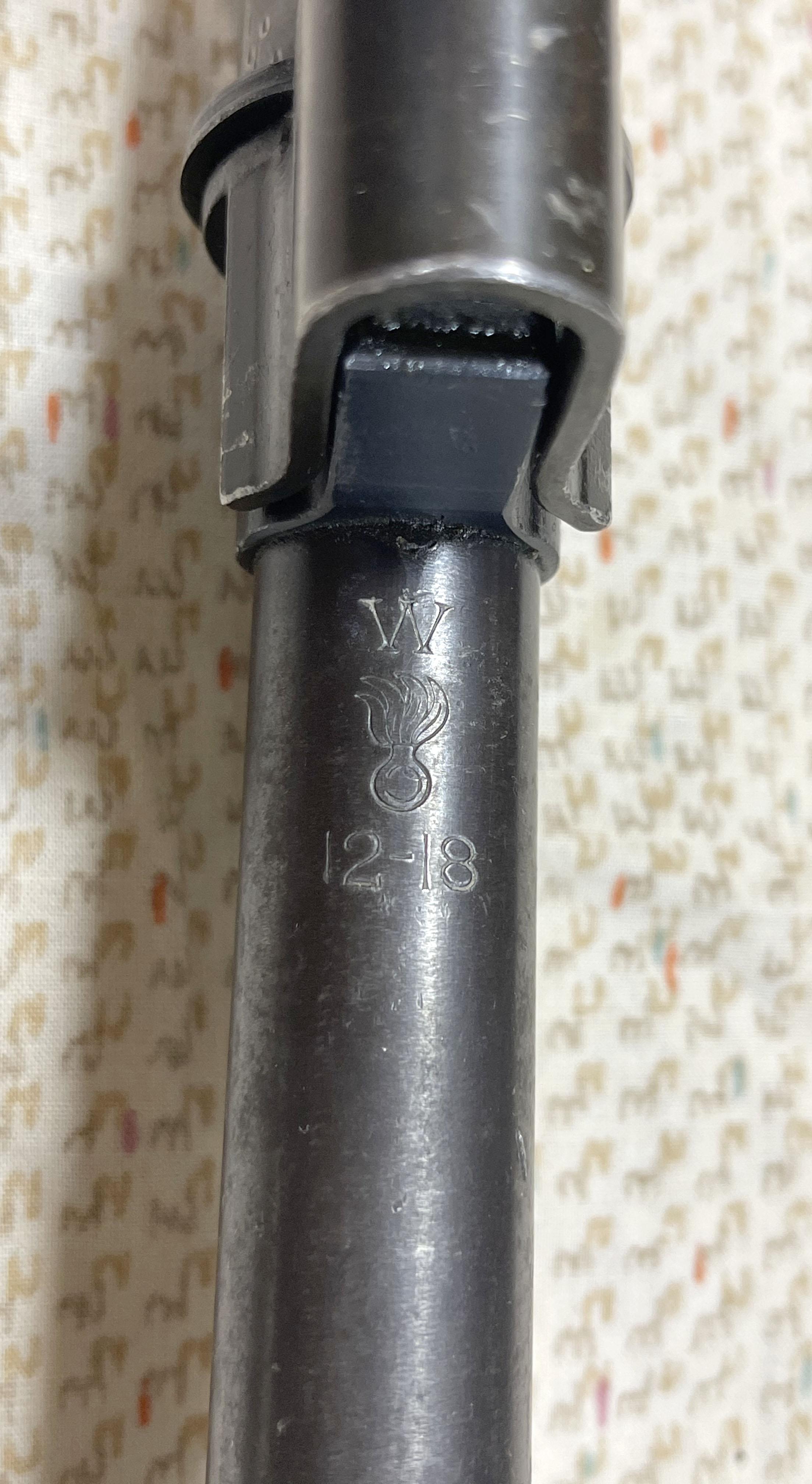 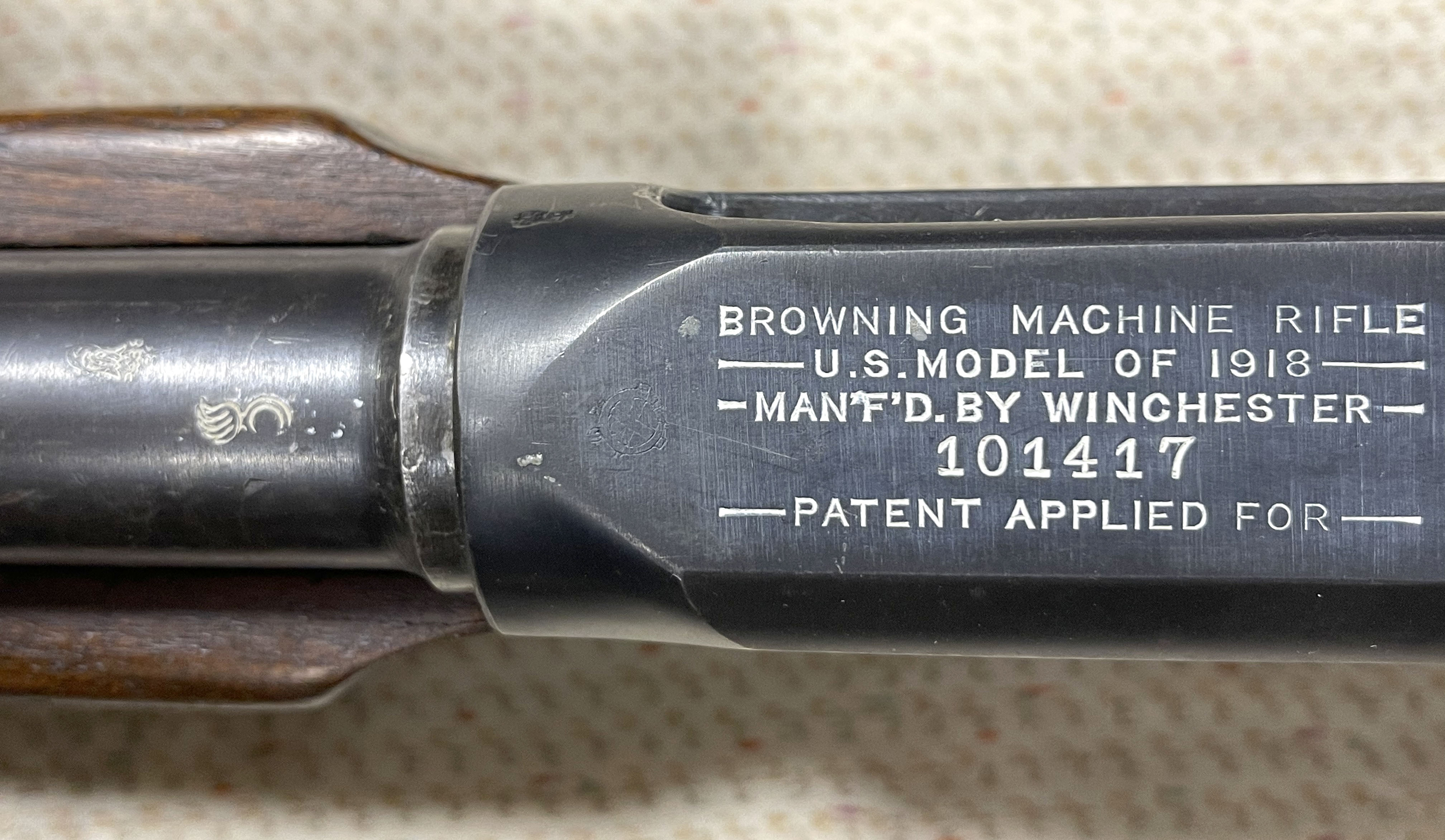 Winchester 1918 Browning BAR Machine Rifle Winchester started manufacturing the Browning Automatic Rifle with serial number 64001. So, this example, serial number 101417, is one of the first forty thousand Browning Automatic Rifles made by Winchester under its WWI contract! Note in the photo that the receiver is marked “Browning Machine Rifle,” the early designation for John Browning’s invention, before this weapon became officially known as the “Browning Automatic Rifle.” This machinegun has an original Winchester barrel dated December, 1918, with excellent rifling. Also note, although this BAR has received some of the early 1918A2 parts, the receiver was never over-stamped “1918A2” and it does not have the later magazine guides, common to the A2 version. It has the early style rear sight and gas port regulator, and the earlier military wood buttstock with the cocking handle groove, in use before the plastic stock came into use. Although little is known about this BAR’s history, the bottom of the trigger guard is marked with a large script “S” and the number 144. See photo. This could indicate that this BAR was firearm number 144 in the armory of the US Army’s Supply unit, designated “Services of Supply”, that had been set up in France as a separate command within the American Expeditionary Forces (AEF) of Gen. John J. Pershing, to support military operations in WWI, and would have continued operations for a period of time after the November 11, 1918 Armistice. This BAR was manufactured in December, 1918, just after the Armistice, and may have been delivered to the AEF as its role in WWI wound down. The 1918A2 parts indicate the BAR may have provided service in WWII as well. The most important quality of this early Winchester BAR is its condition. Please study the photos. This BAR has its ORIGINAL Blued finish! It is an exceptional example of an early Browning Automatic Rifle. It is a hybrid version, created from a 1918 model, before the upgraded 1918A2 had been put into production. Similar examples are shown on page 141 of the late James L. Ballou’s fine work on the BAR: Rock in a Hard Place – The Browning Automatic Rifle. This Browning has been test fired and functioned 100 percent perfect in semi-auto and full-auto. A video demonstrating it in operation is available. Most machinegun sellers do not provide a video demonstrating that their machine gun works – something a purchaser of a registered machinegun needs to know! It is a true joy to operate. $50,000 plus HIS. Fully Transferable, Curio & Relic and extremely hard to duplicate in this condition. For questions, please call (575) 405-0911. Quickly transfers tax-free to your dealer by eFile. 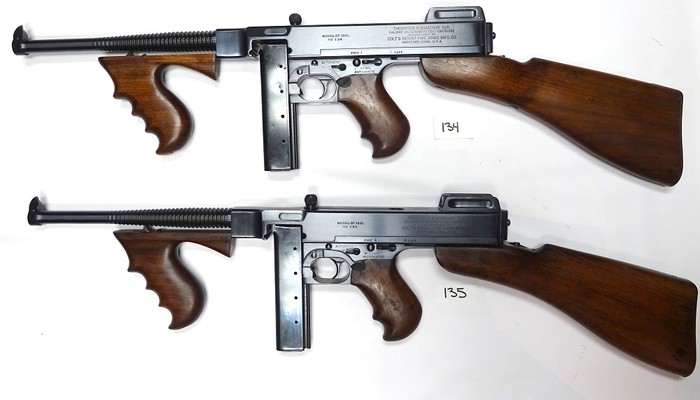 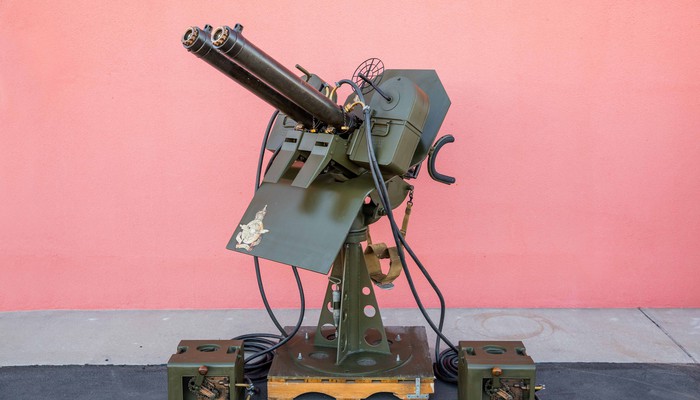 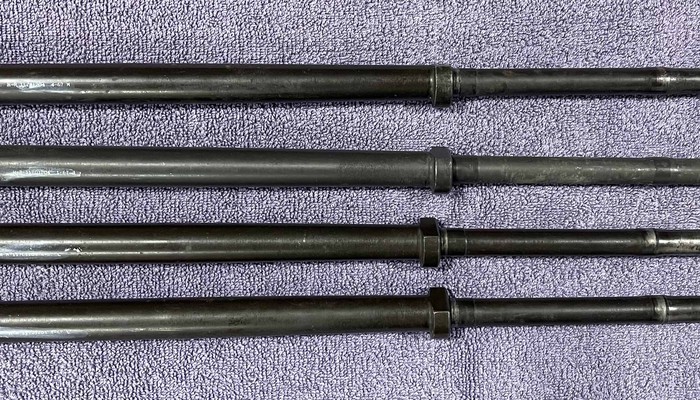 Minigun Barrels from the…