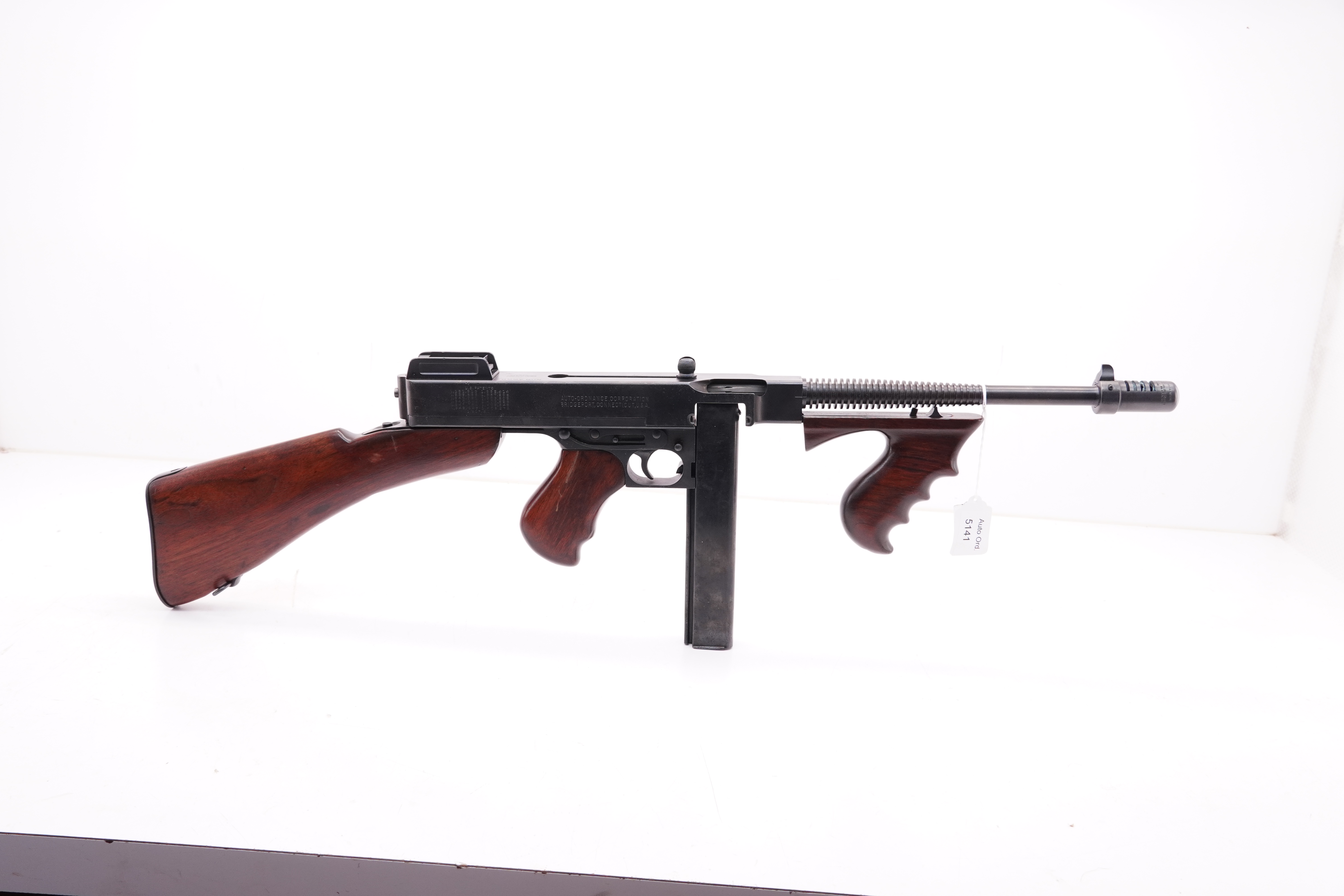 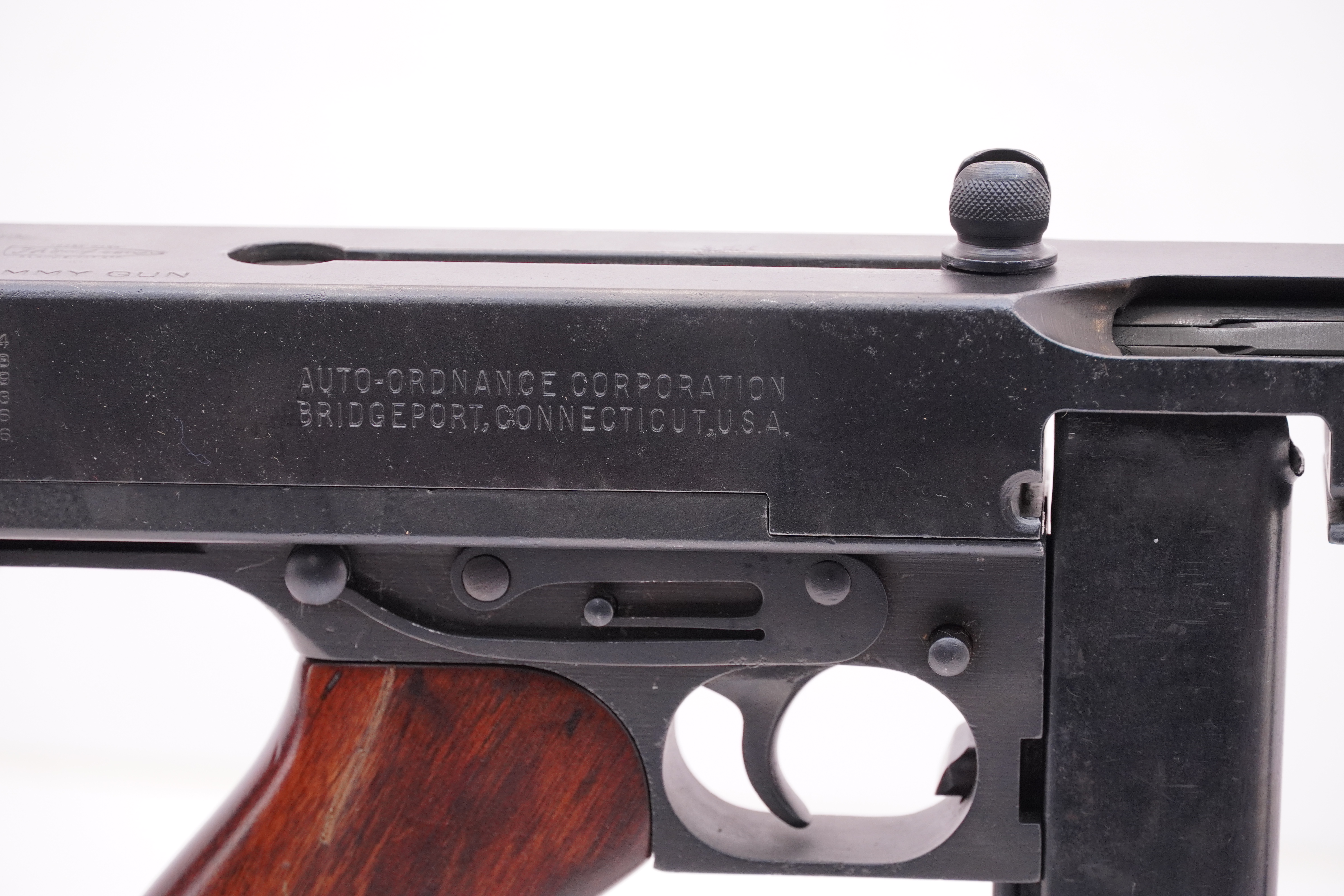 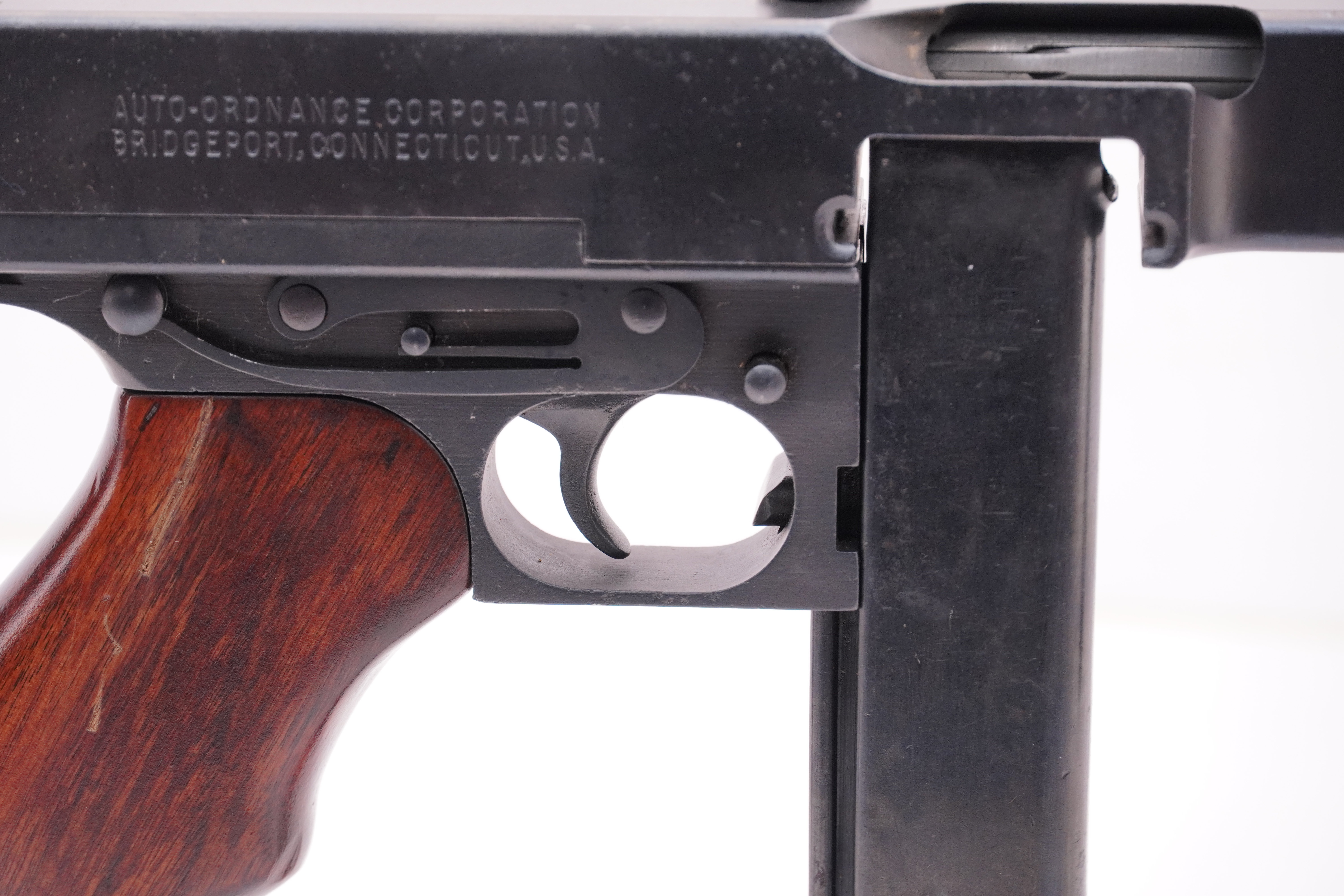 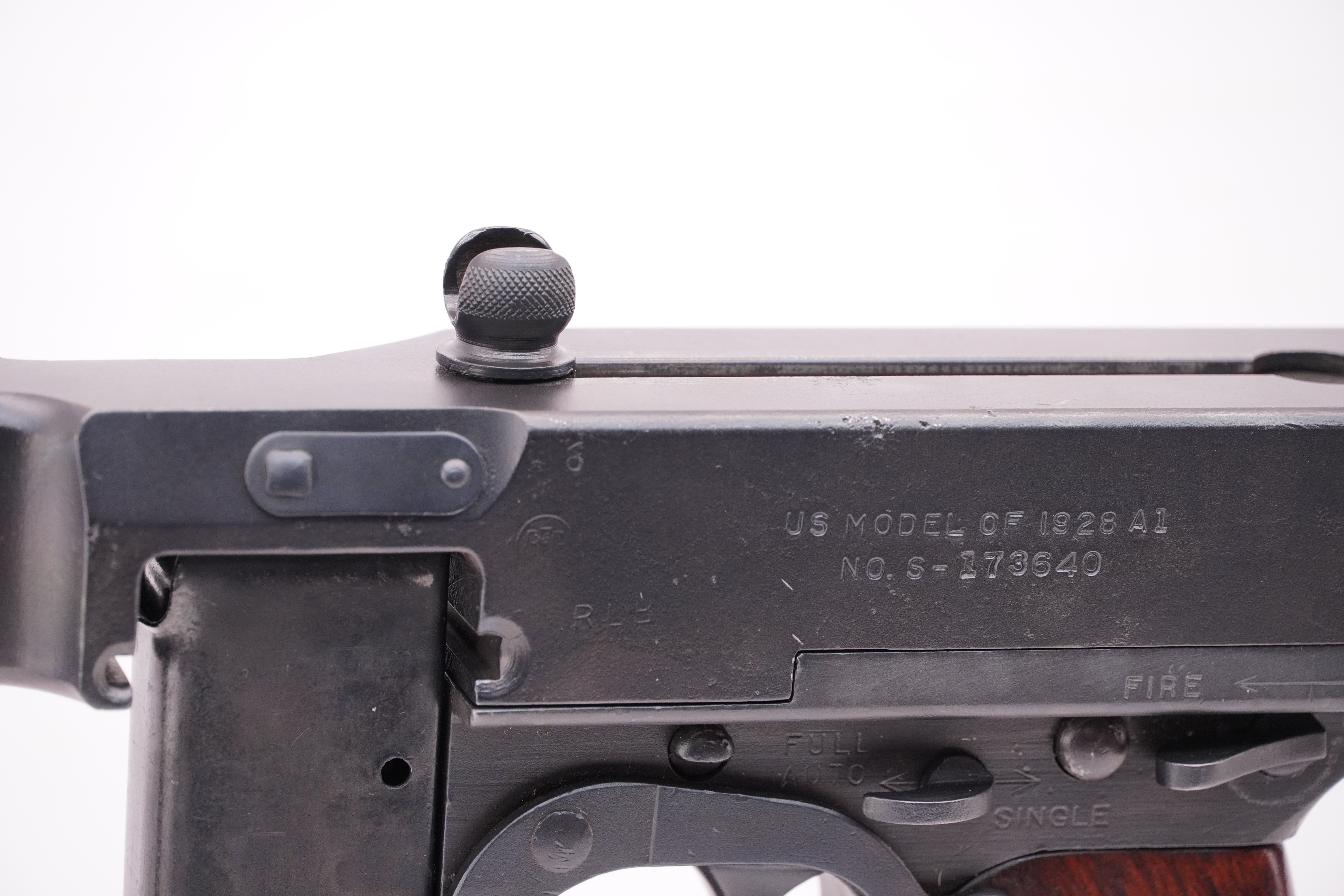 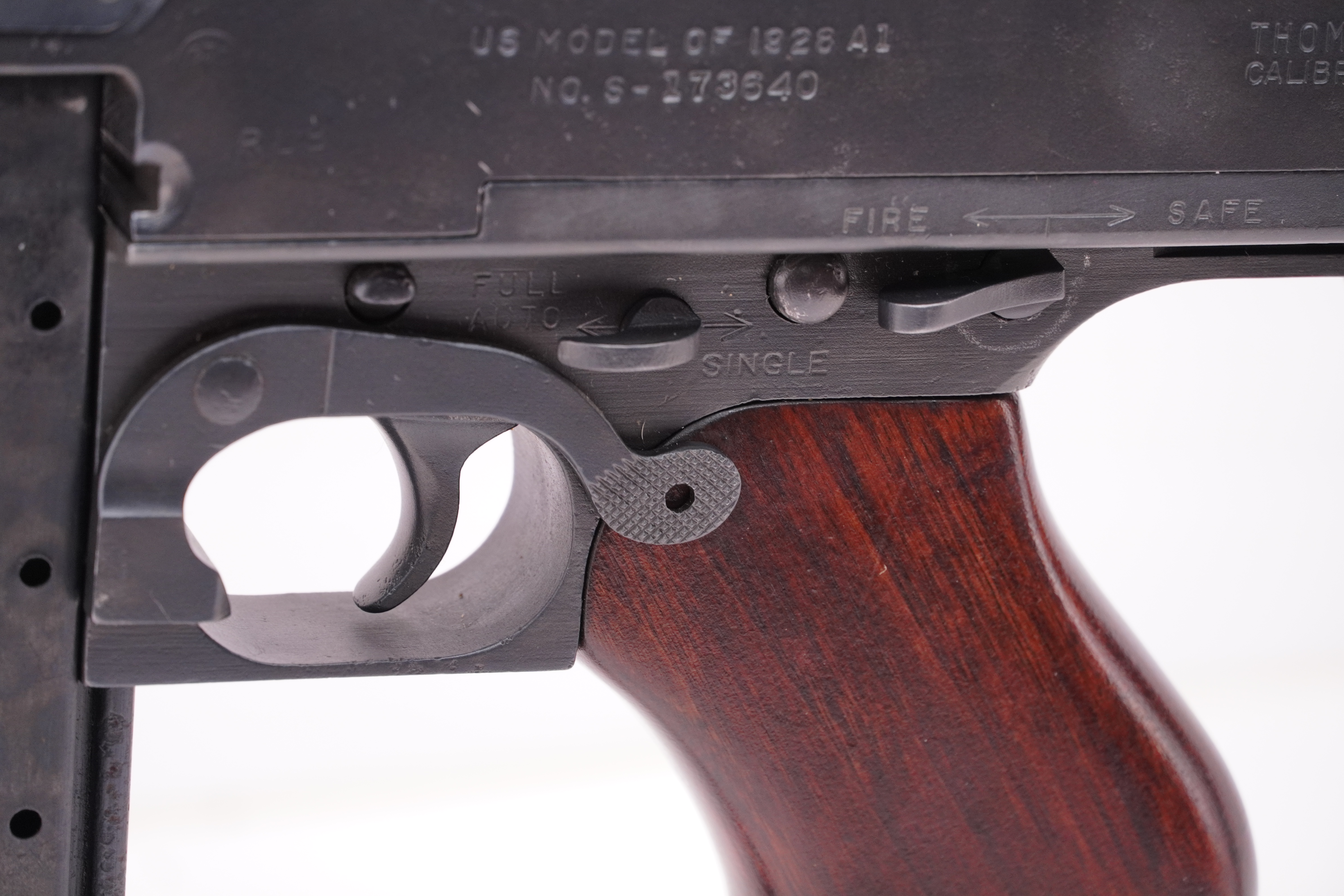 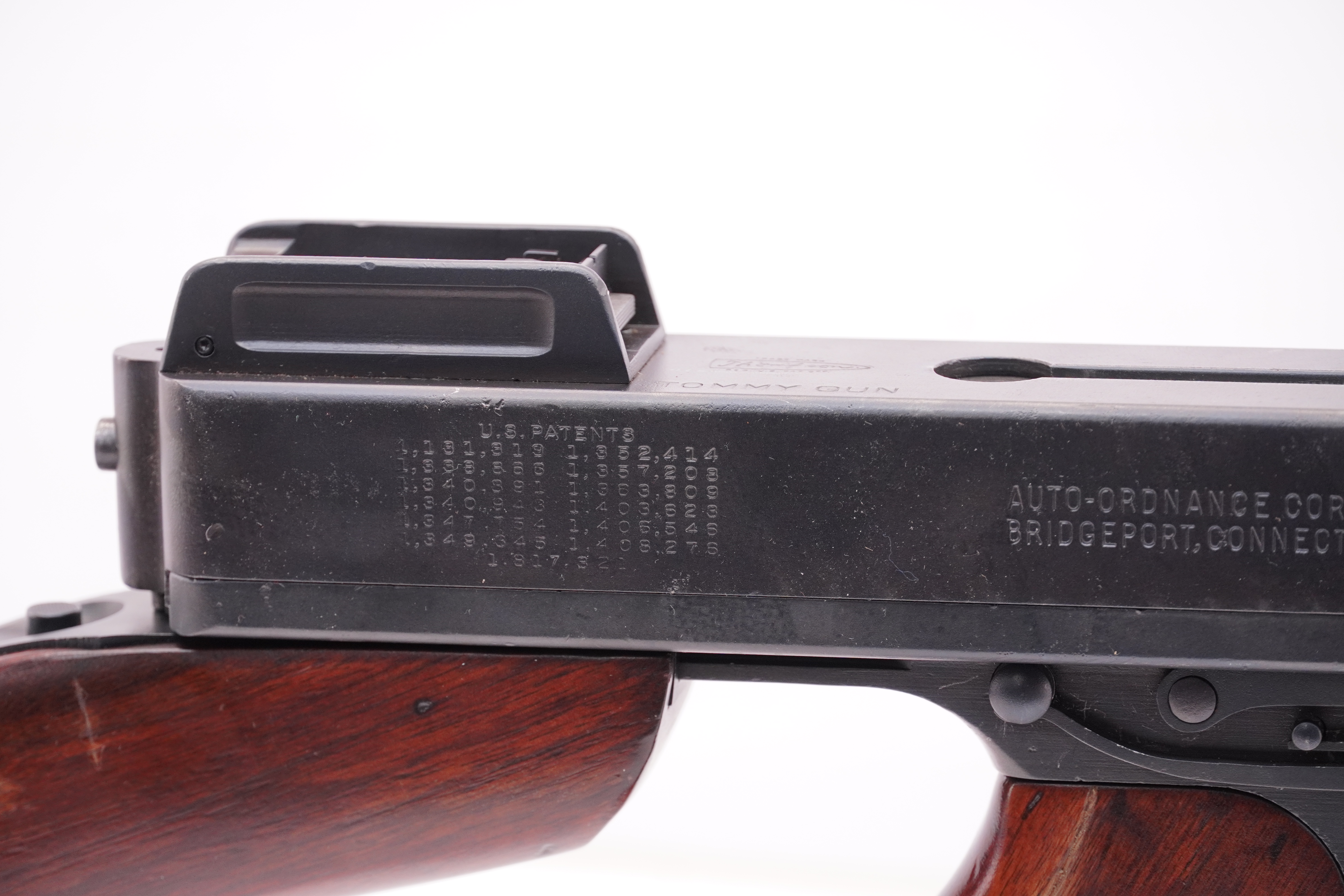 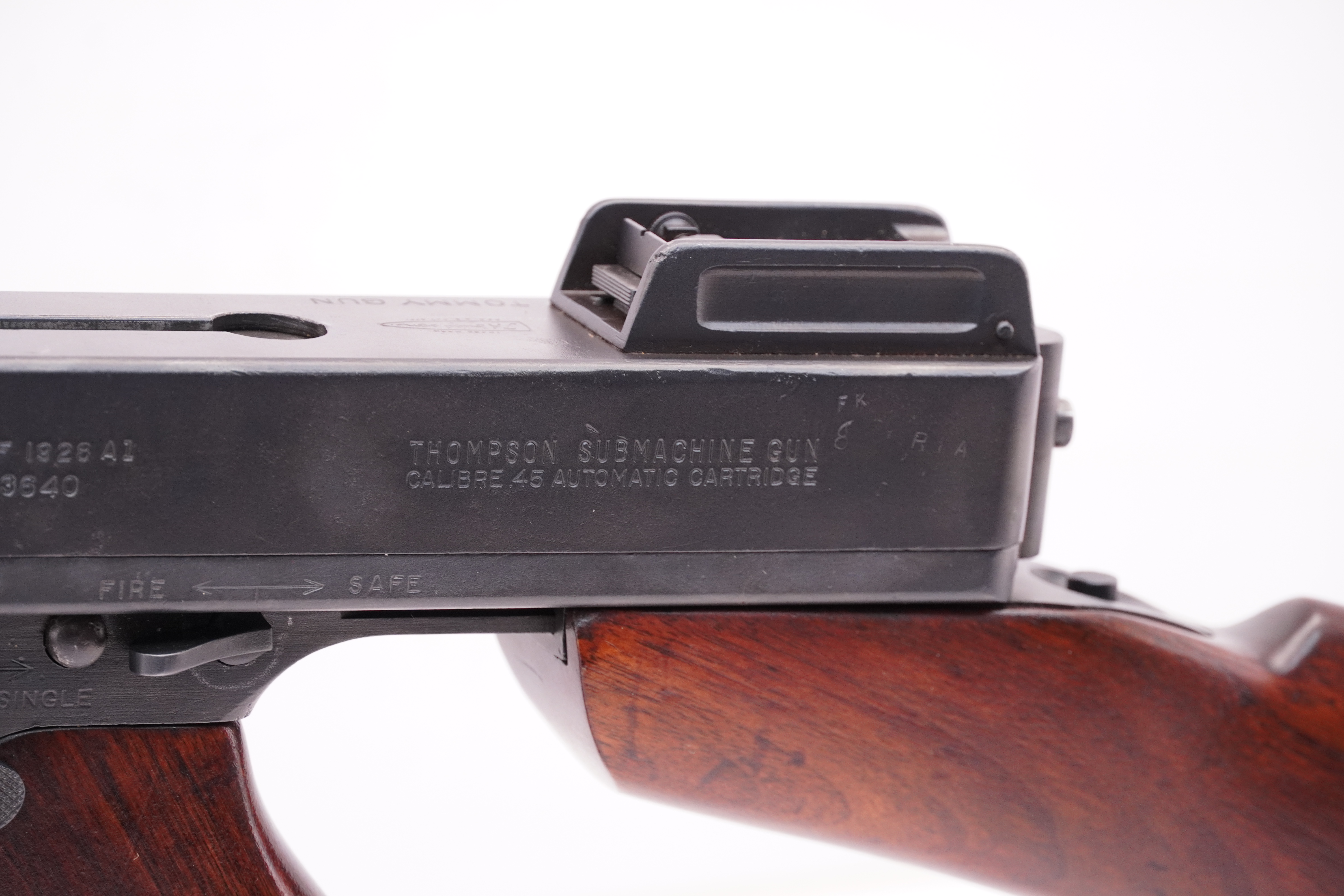 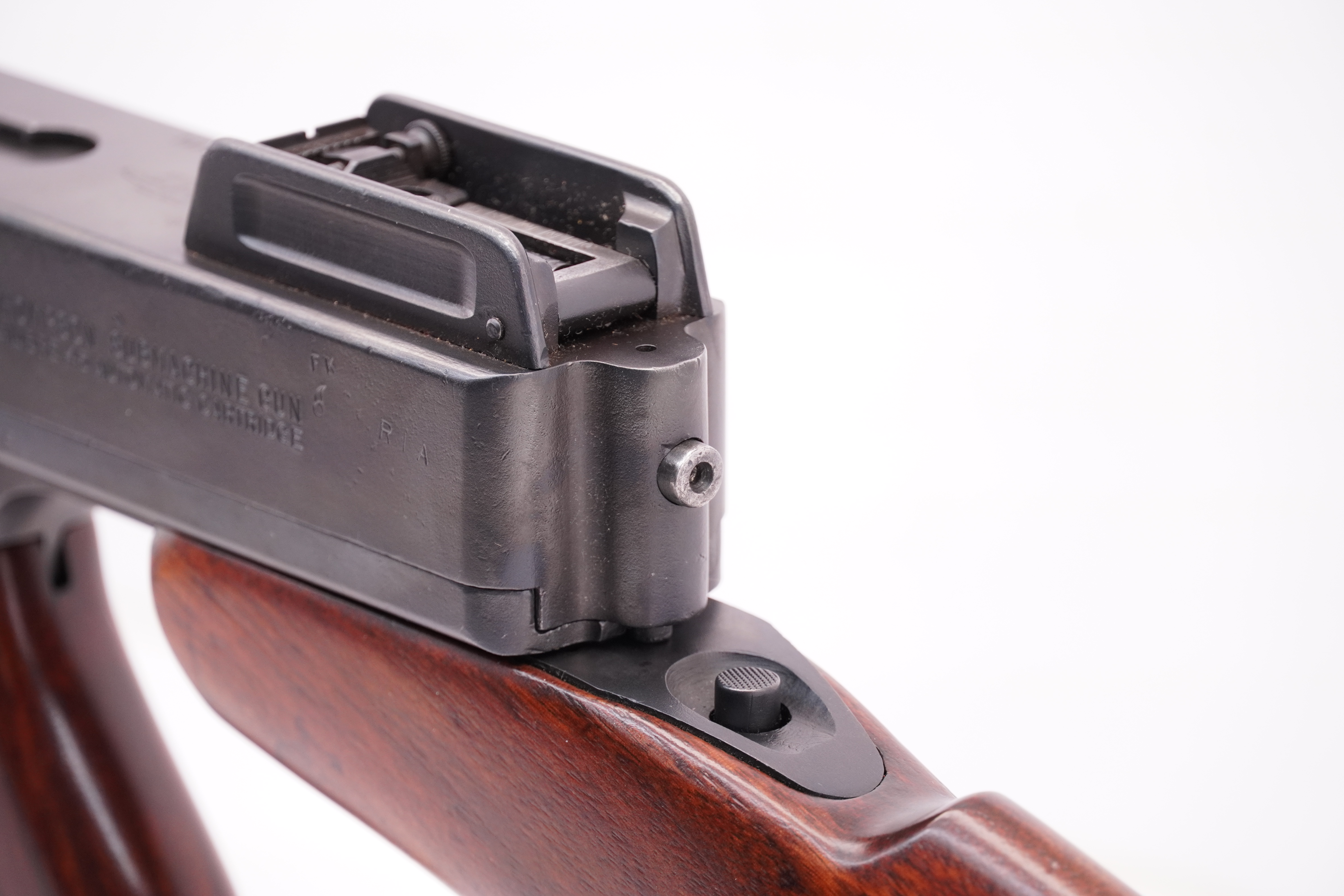 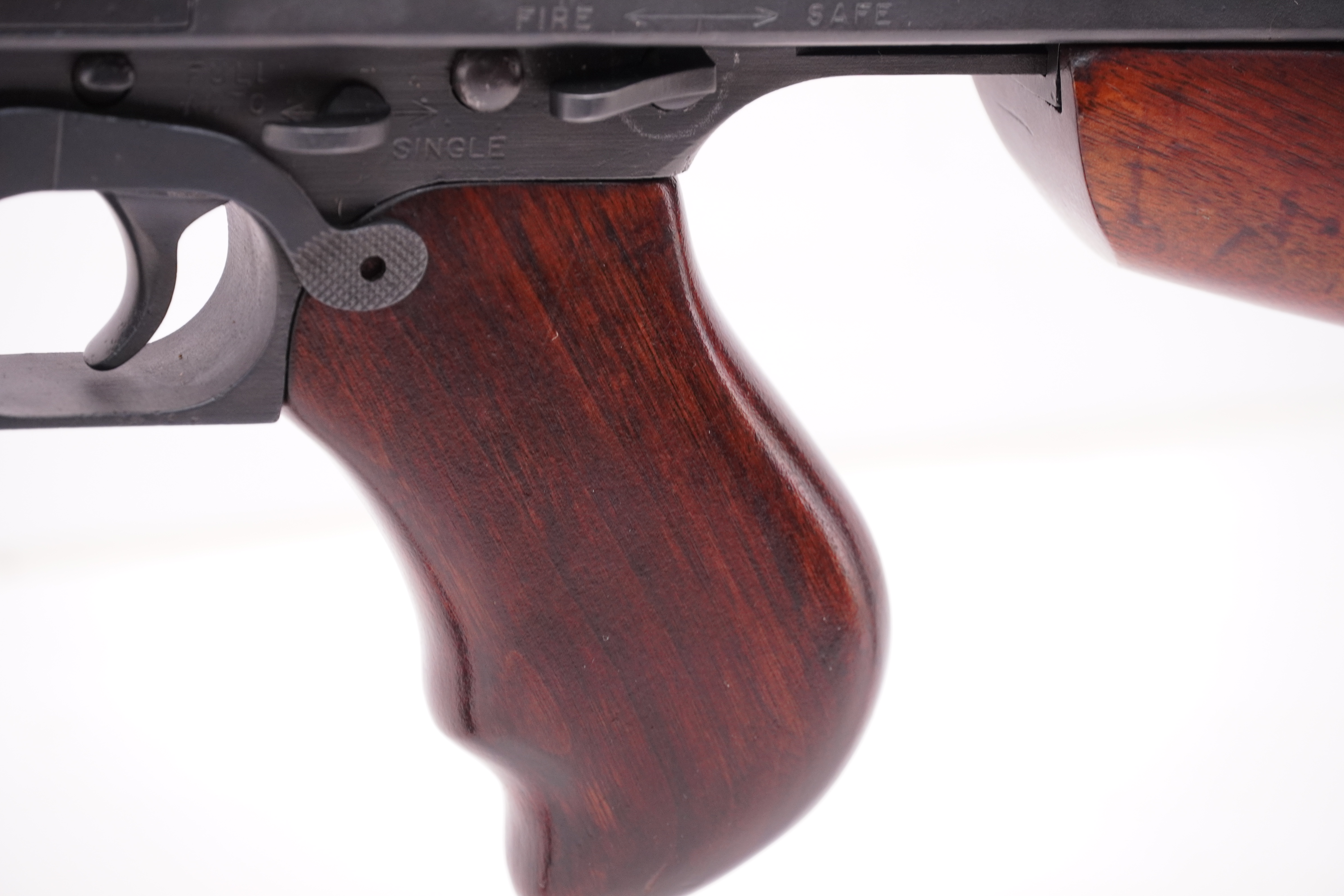 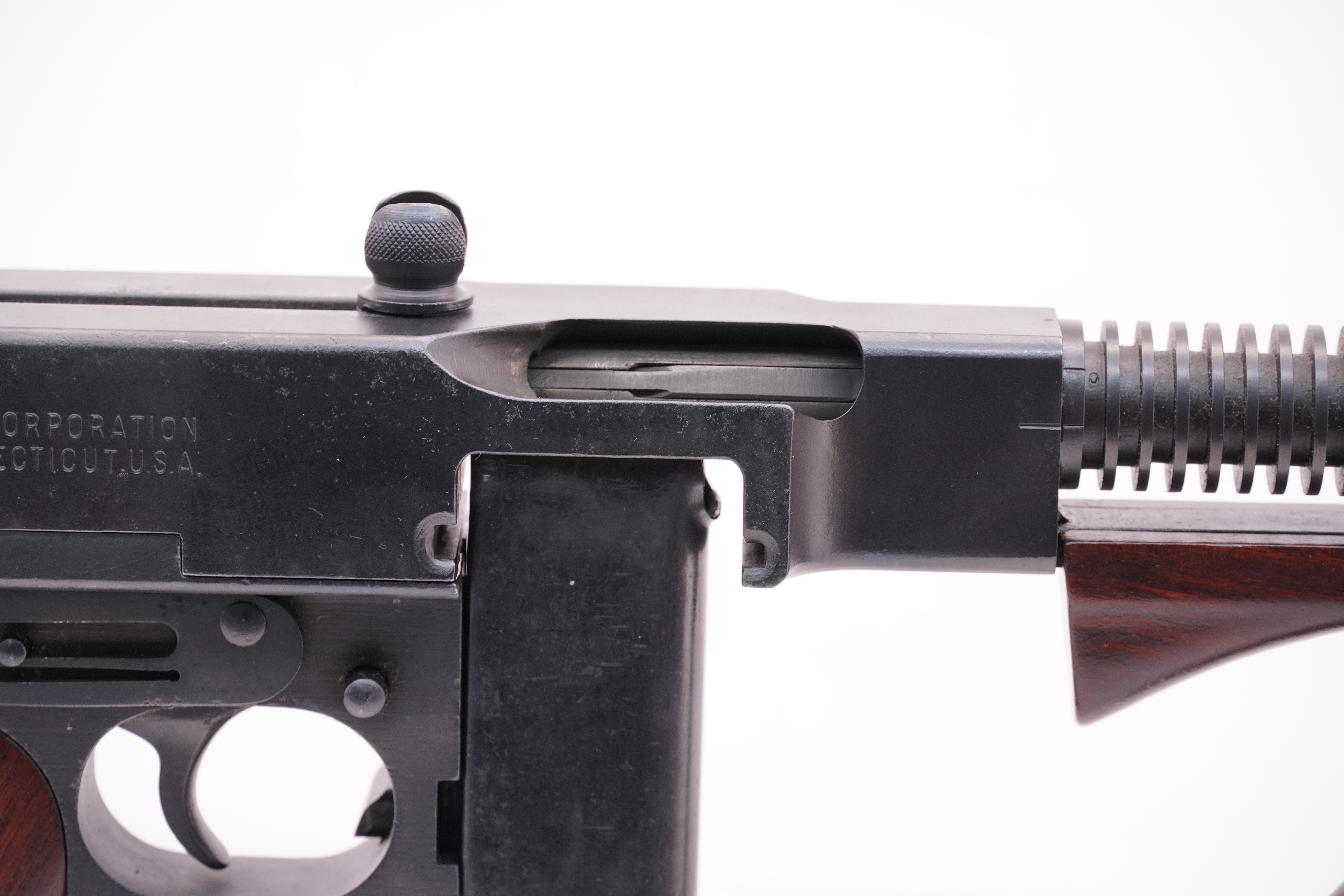 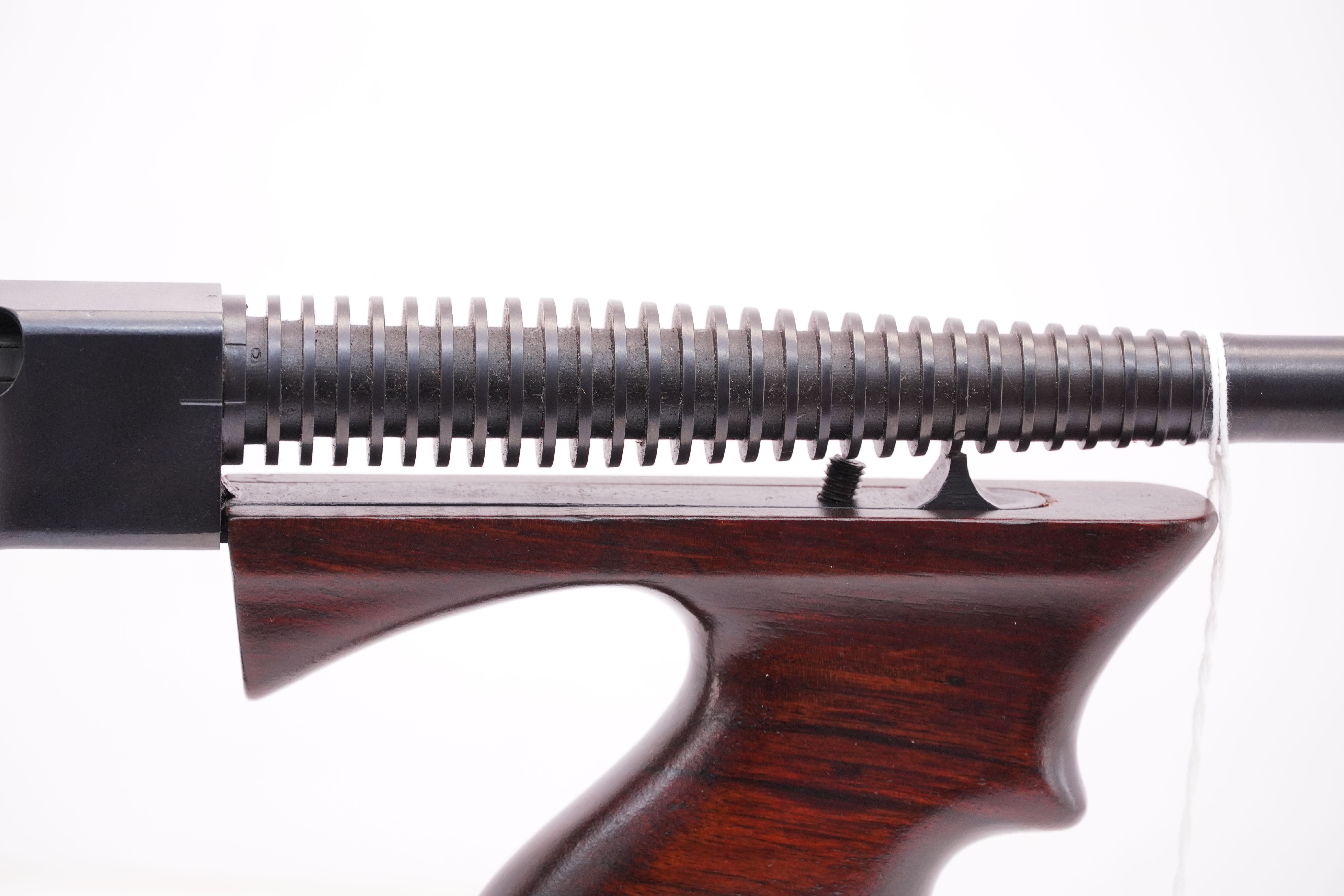 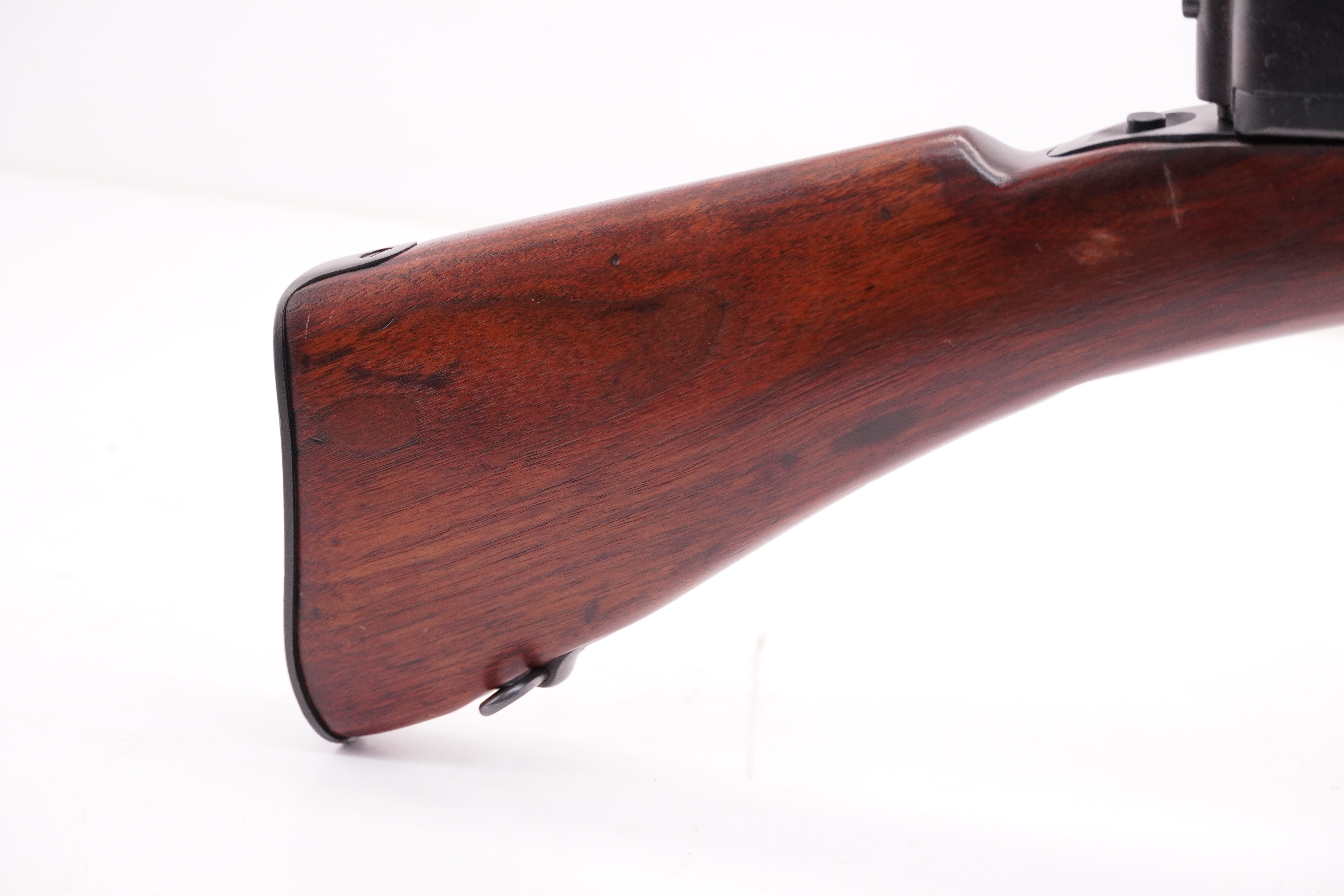 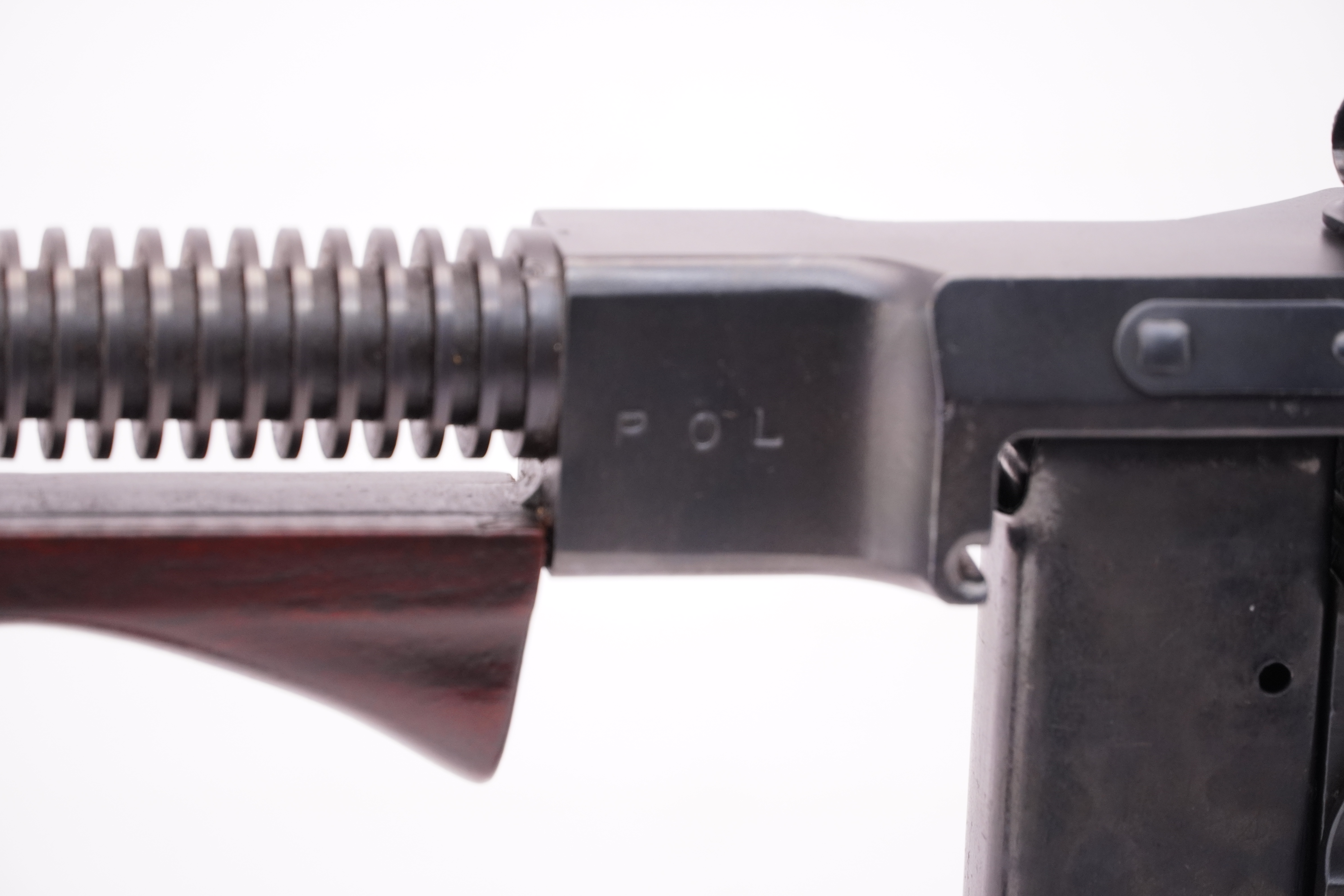 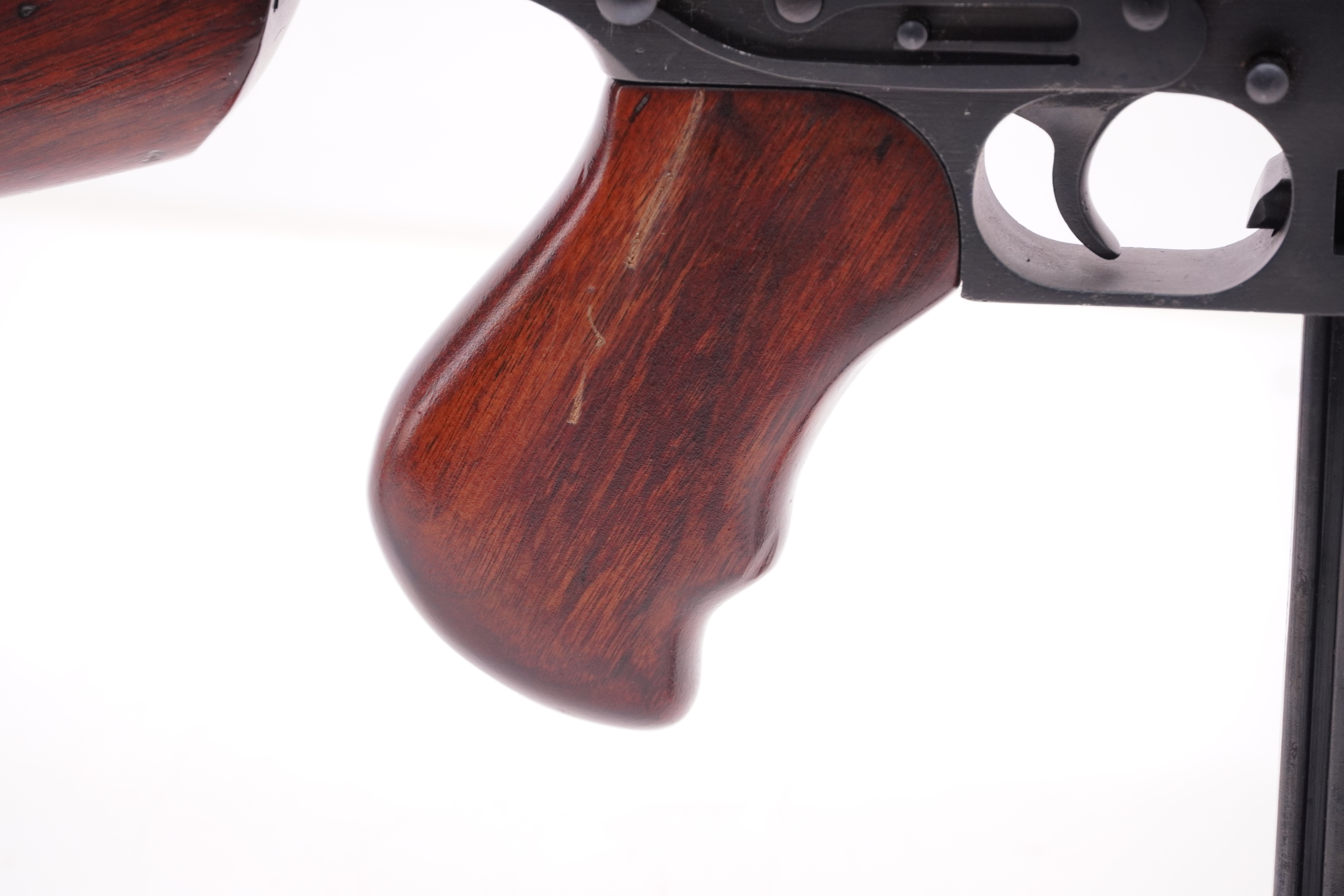 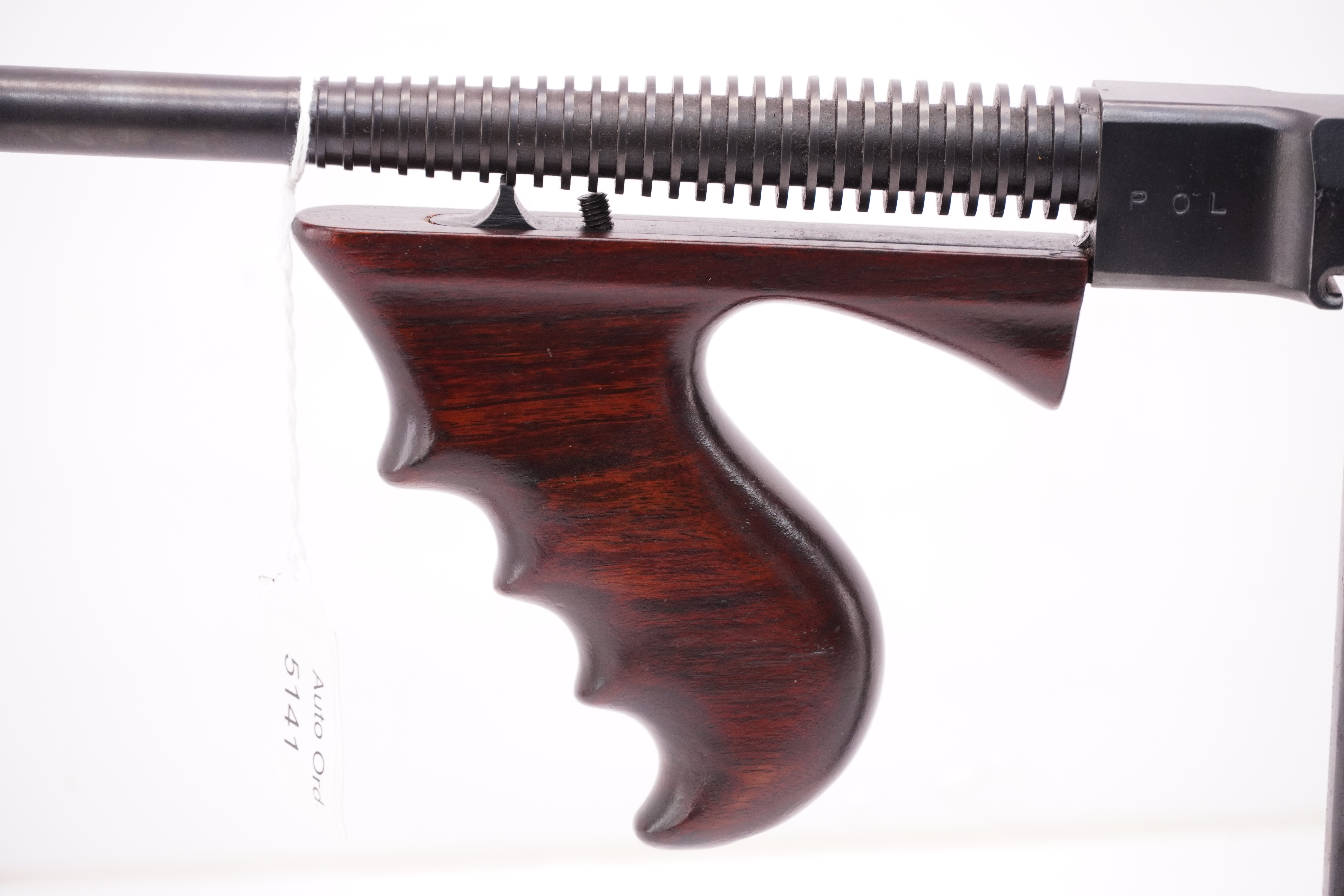 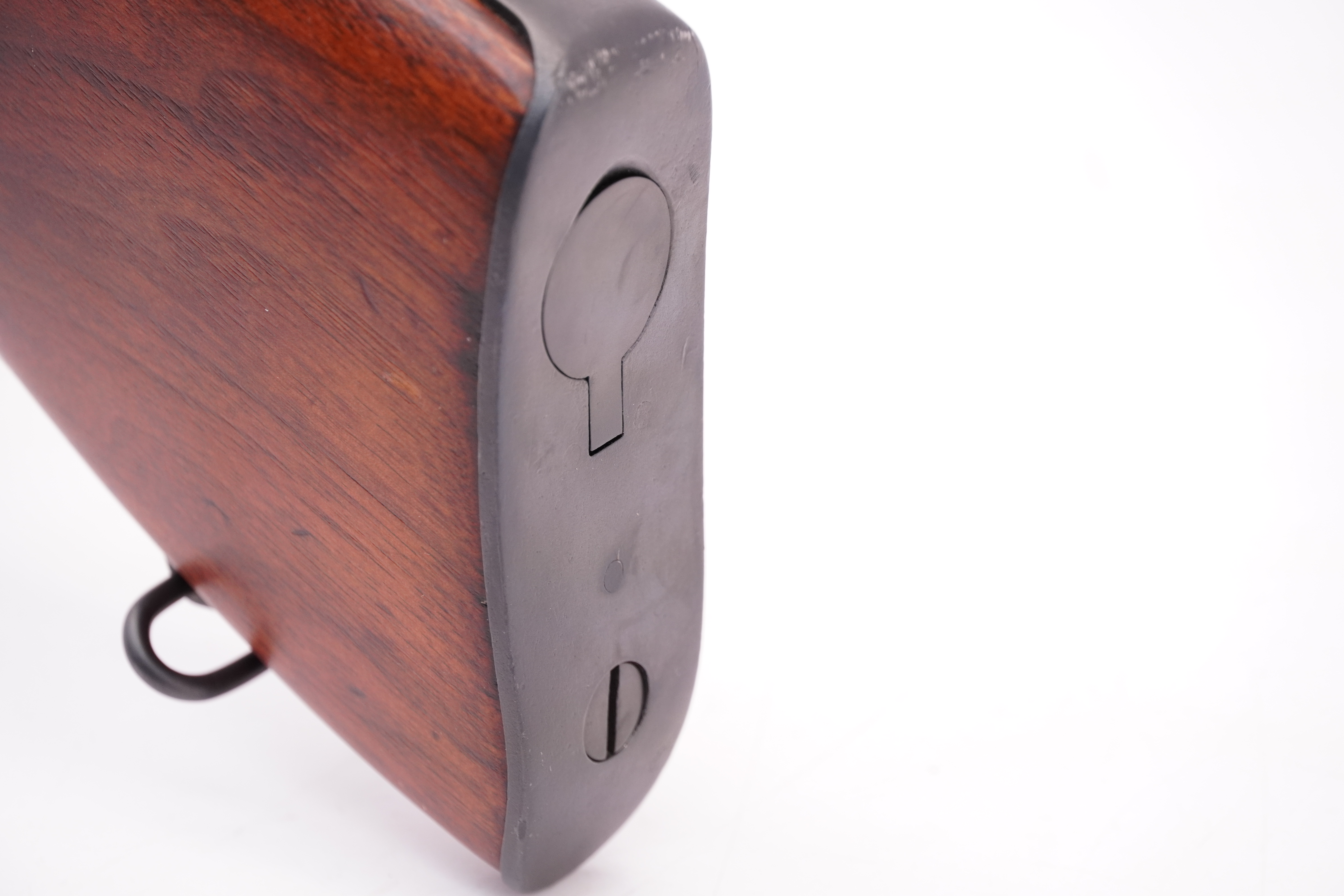 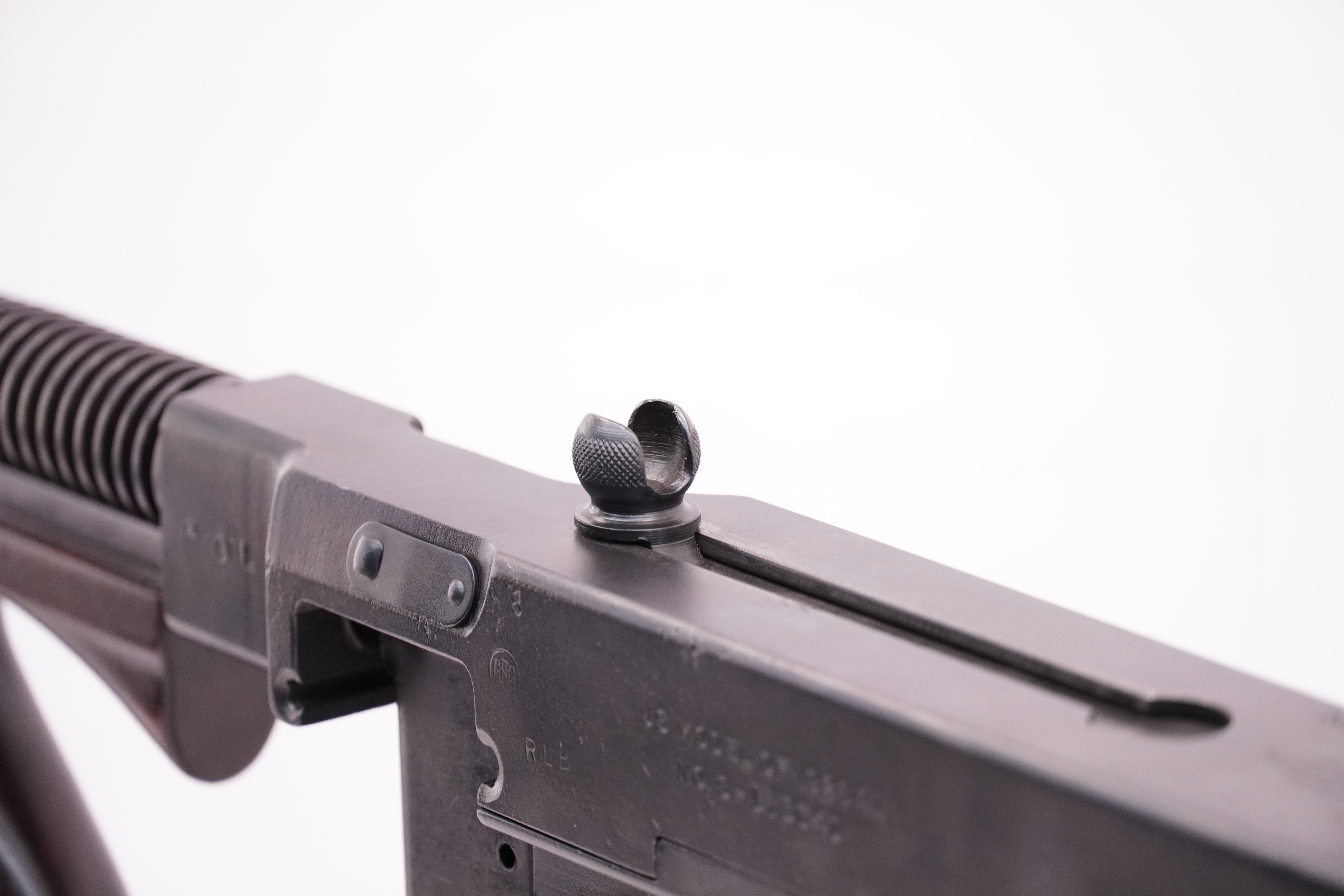 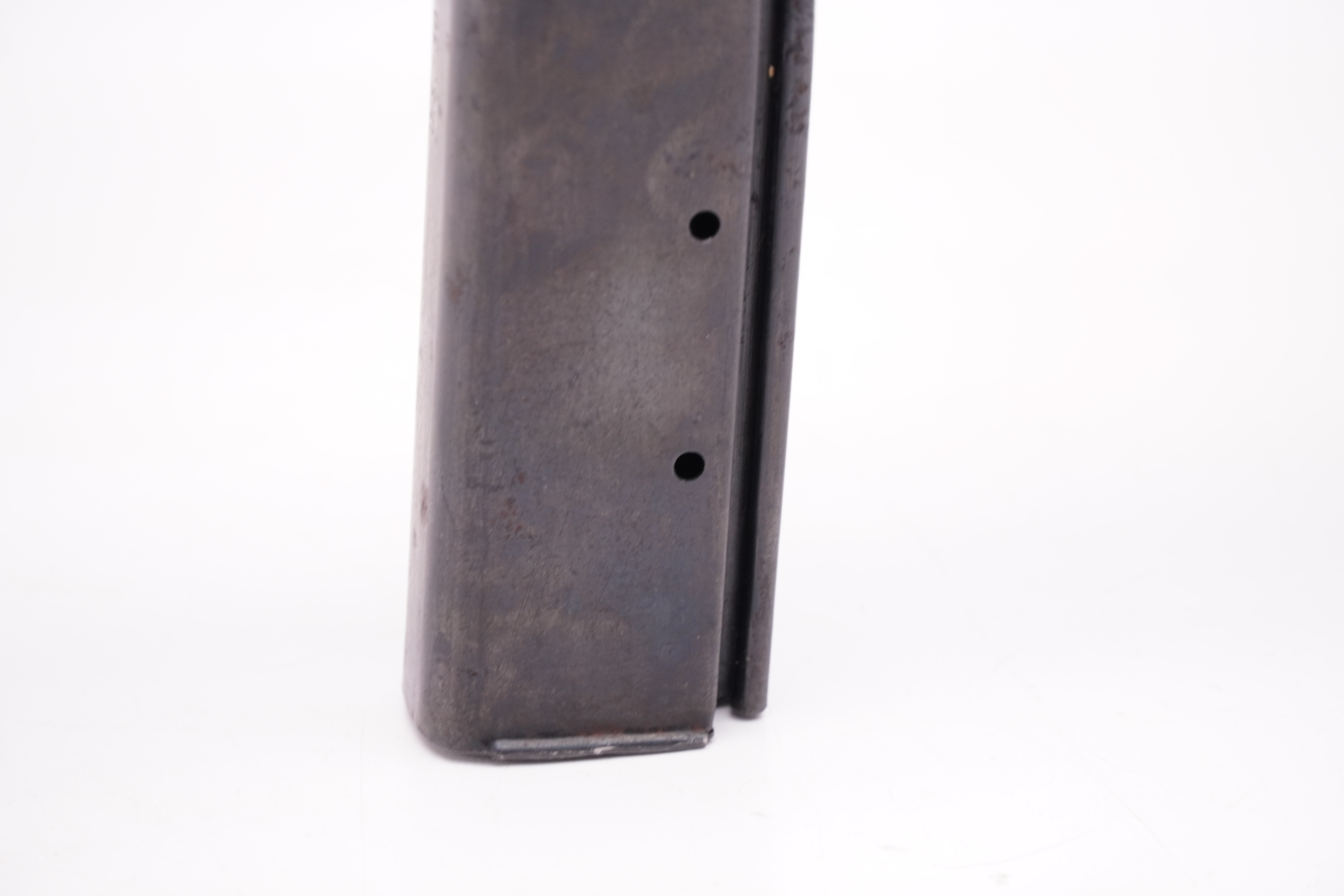 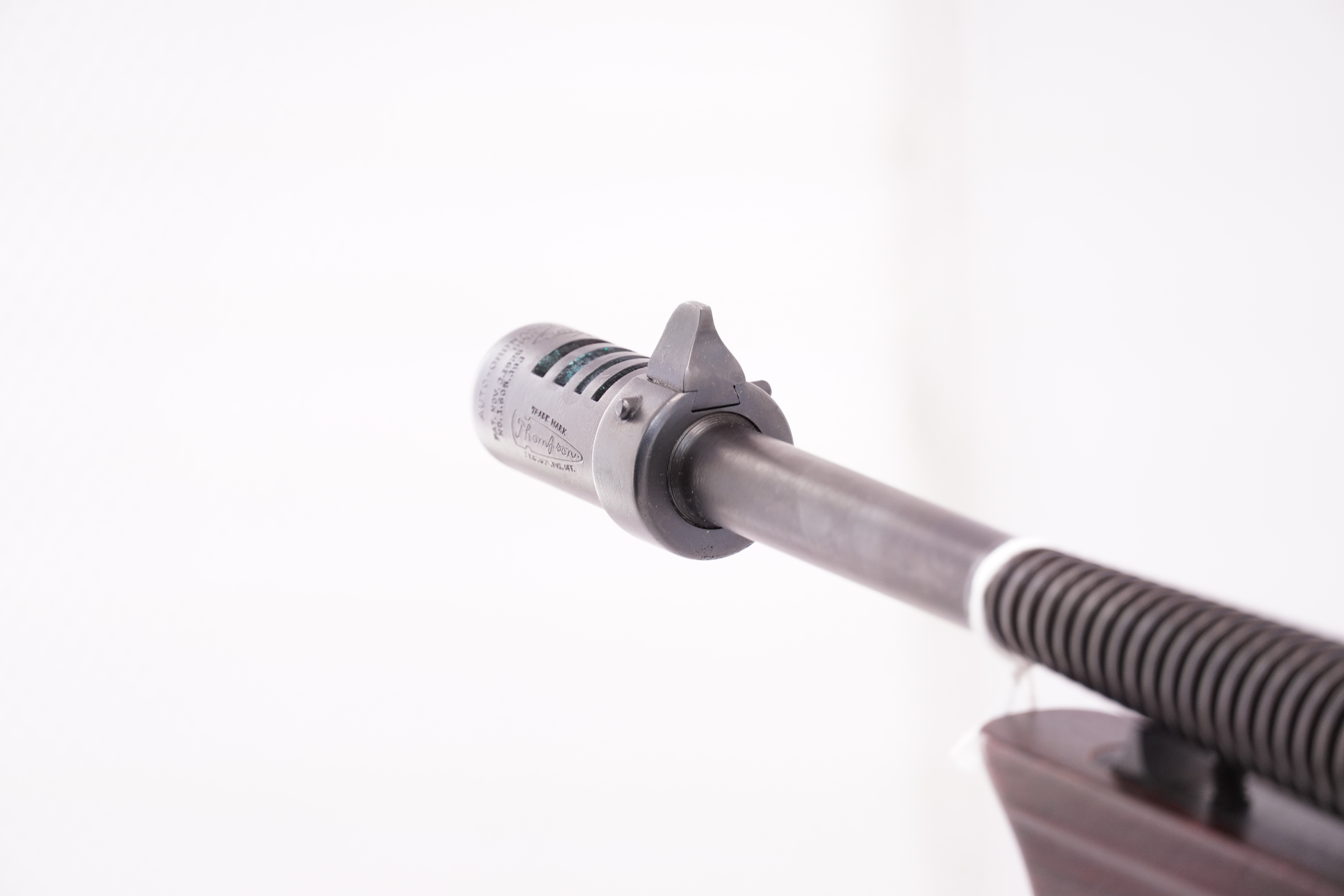 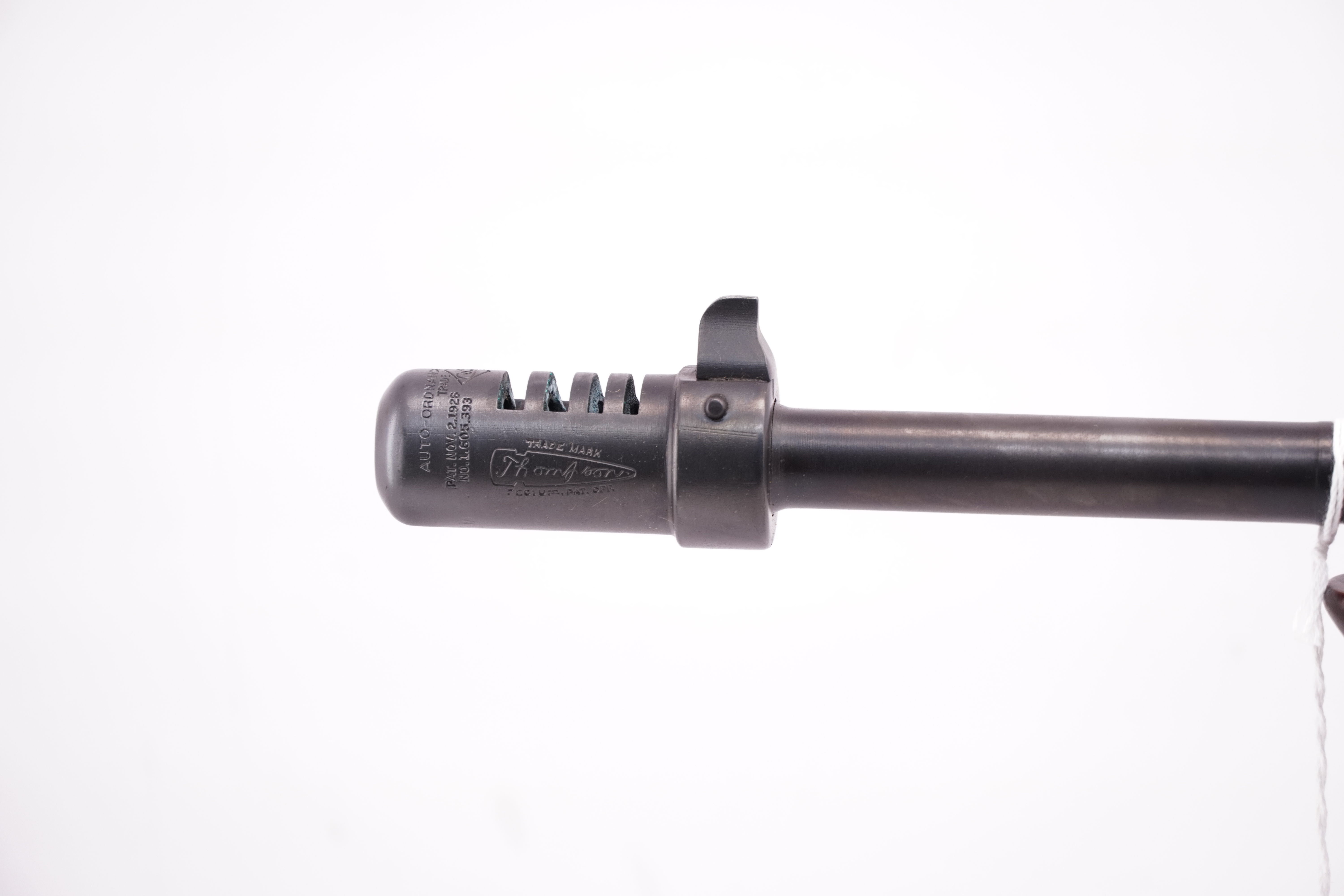 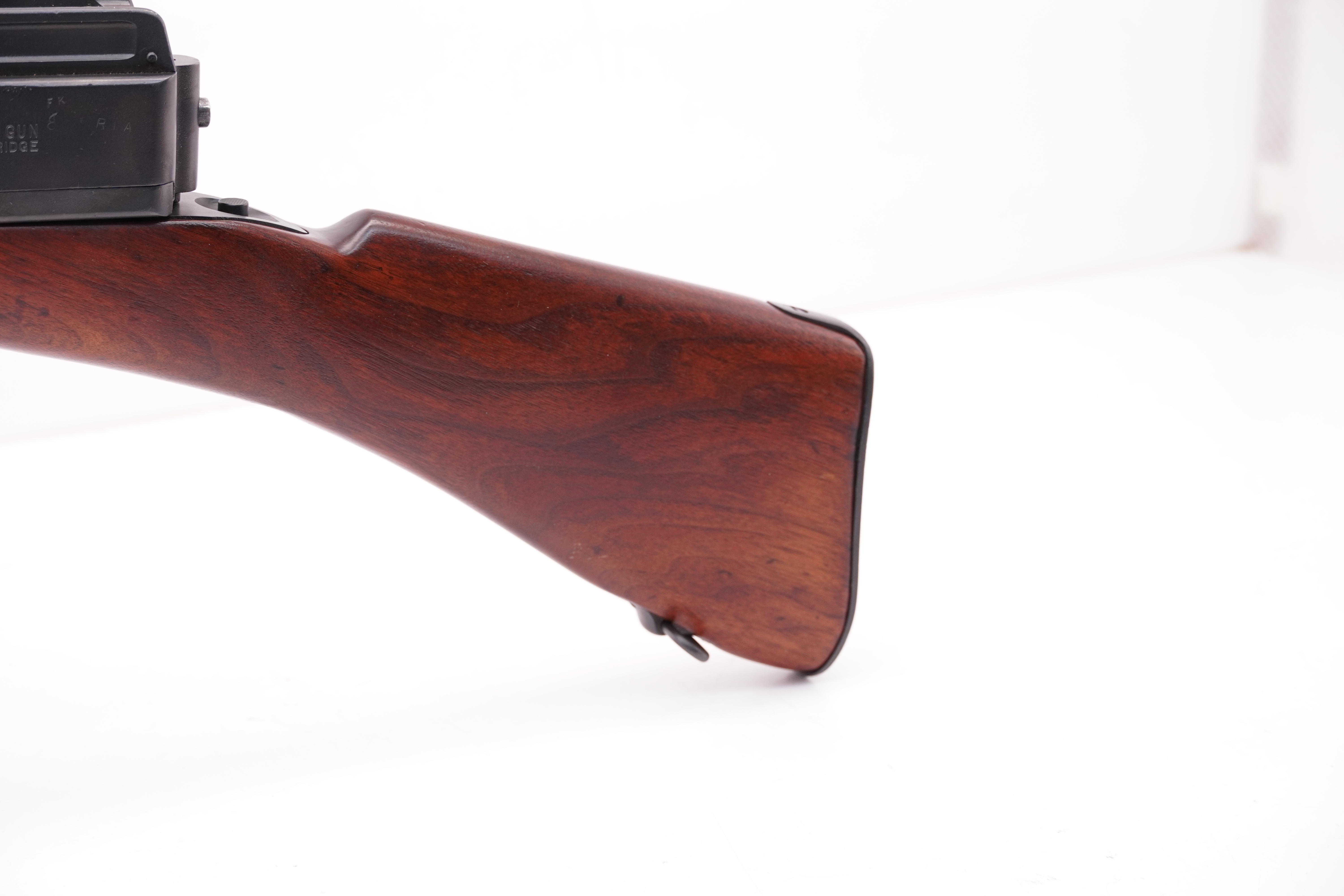 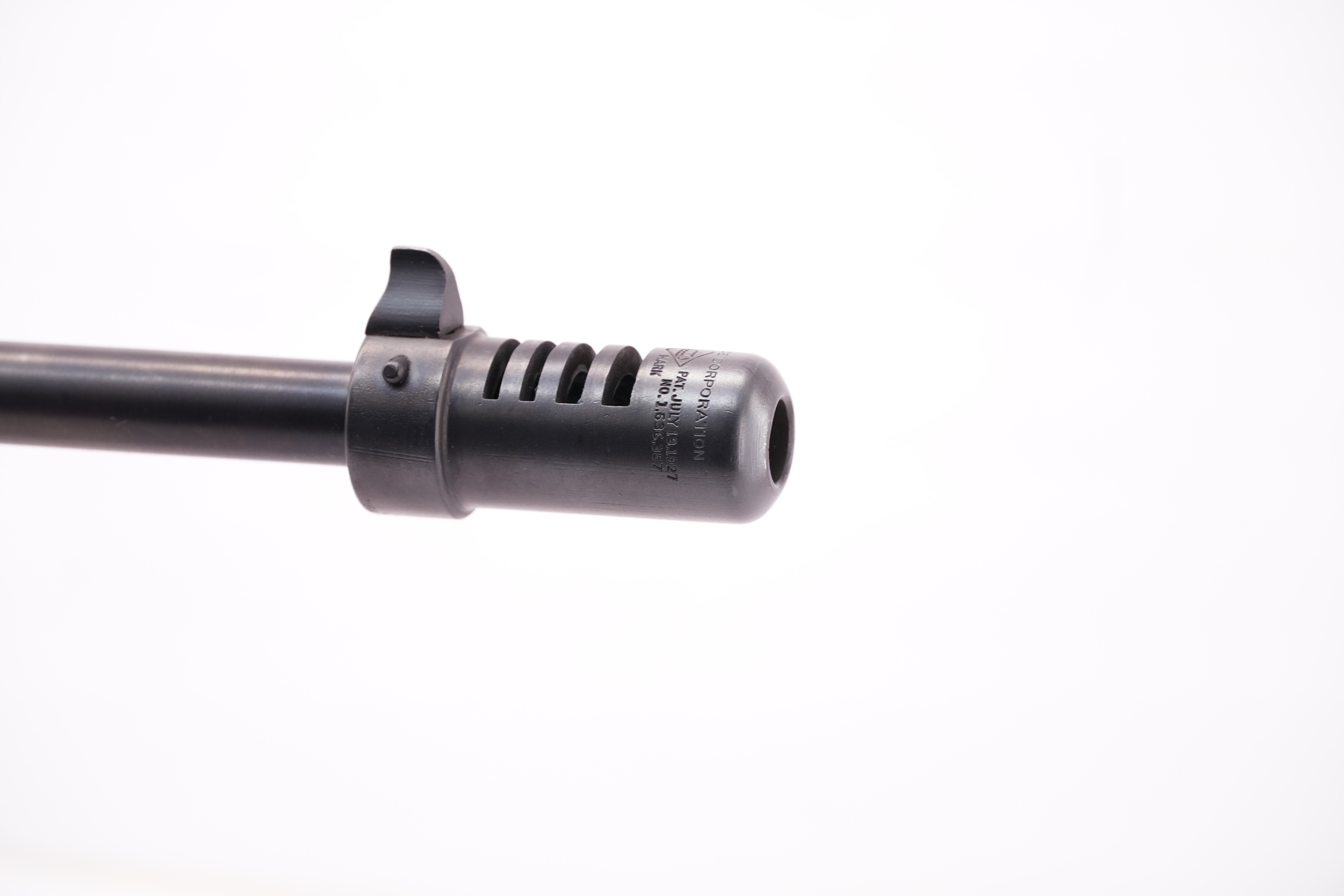 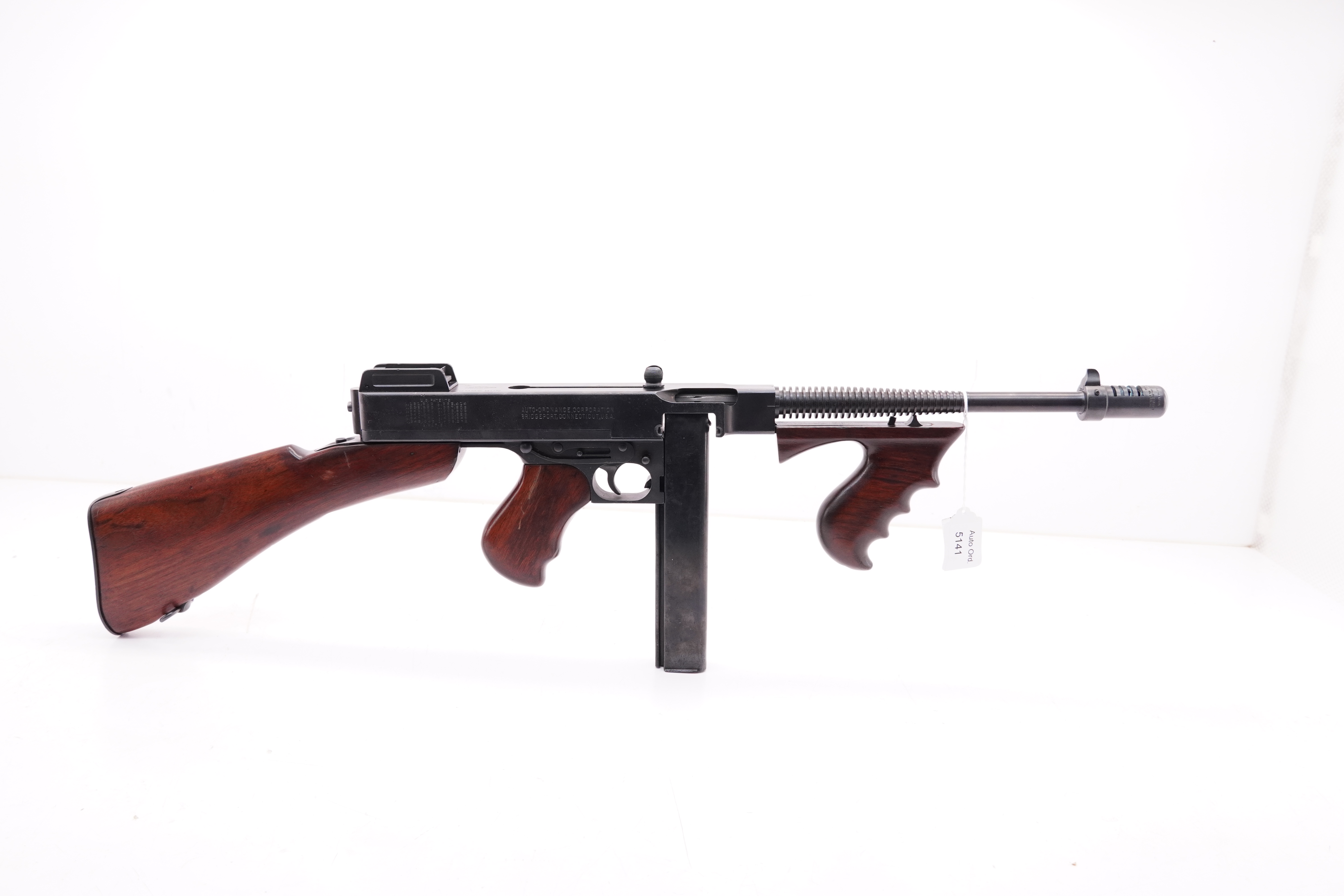 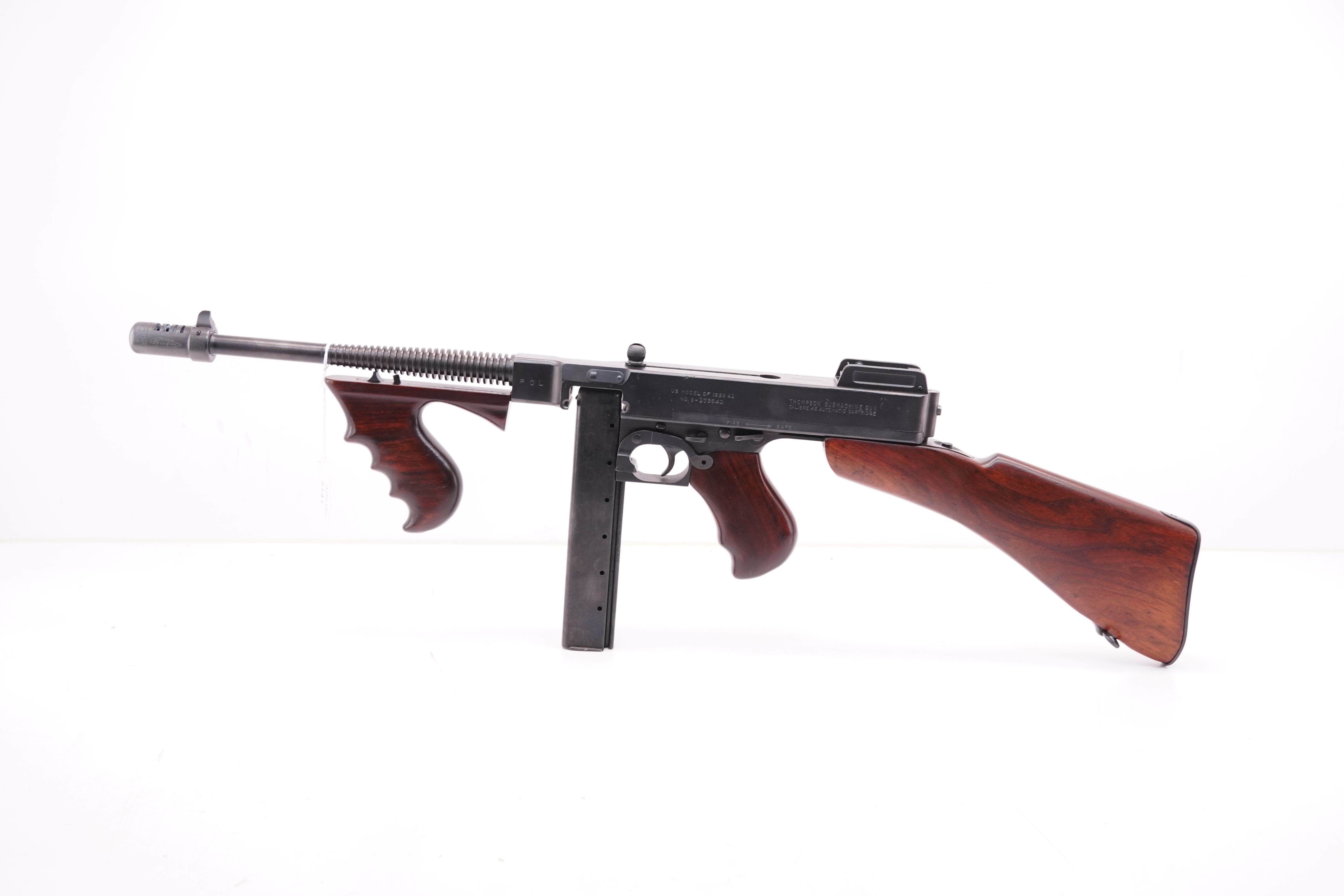 The Thompson submachine gun (also known as the "Tommy Gun", "Chicago Typewriter", "Chicago Piano", or "Trench Broom") is a blowback operated, air-cooled, magazine fed selective fire submachine gun, invented by the United States Army, Brigadier General John T Thompson in 1918. It was originally designed to break the stalemate of trench walfare of World War I, but was not finished until after the war ended. The staff of Savage Arms looked for ways to simplify the M1928A1, and produced a prototype in February 1942, which was tested at Aberdeen Proving Ground in March 1942. Army Ordnance approved adoption (as the M1) in April 1942. M1s were made by Savage Arms and by Auto Ordnance. M1s were issued with the 30-round box magazine and would accept the earlier 20-round box, but would not accept the drum magazine. For WWII, approximately 1,700,000 Thompson Submachine Guns were produced by Auto-Ordnance and Savage Arms, with 1,387,134 being the simplified World War II M1 and M1A1 variants. The 1928 Thompson would be the last small arm adopted by the U.S. Army that used a year designation in the official nomenclature. With the start of World War II, major contracts from several countries saved the manufacturer from bankruptcy. A notable variant of the Model 1928 with an aluminum receiver and tenite grip, buttstock, and forend, was made by Savage.

This Thompson has the standard markings and a number of proofs that are present on the left side of the receiver; "R.L.B.", circled "GEB", and "flaming bomb" stamps near the magazine housing, "RIA/FK" stamps for overhaul at Rock Island Arsenal near the rear, and "POL" (Can't figure out, there is some talk that it stands for Police) near the barrel. Gun presents some pitting on the upper and lower. Looks to have been refinished since pitting. Upper and lower serial numbers do not match. The Butt stock is not marked with the savage "S" or the anchor. The barrel has not been replaced and the bore is in excellent condition.  This is a Dealer Sample (Pre 86) Machine gun. Can only be owned by firearms dealers. If you are NOT a dealer you can NOT own this weapon!!

According to the ATF paperwork Bren is the maker for this Machine Gun . It is our goal that you are 100 percent satisfied with our products and transaction. The buyer will have a 3 day money back inspection period after these items are received to your FFL. This will transfer direct to your Class III dealer tax free from our inventory on a form 3. 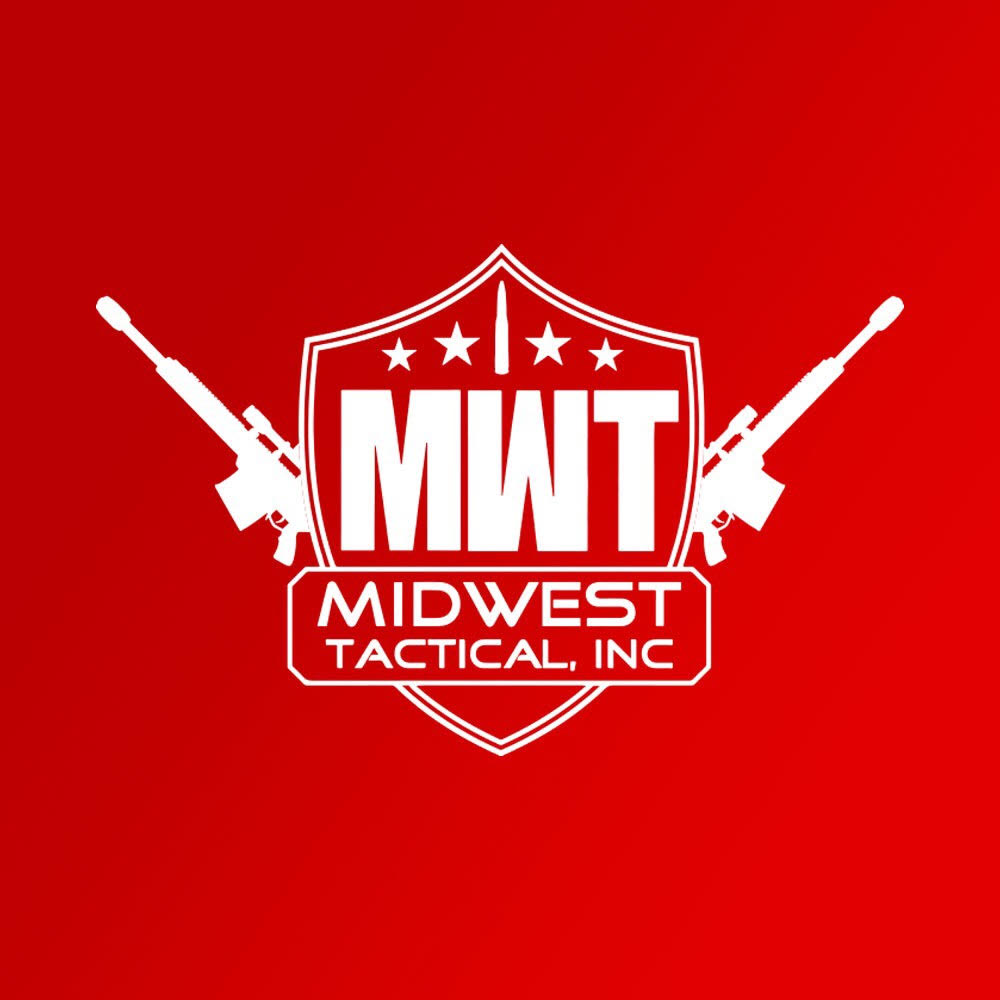 This form sends an email to the lister: Midwest Tactical regarding listing #17358128