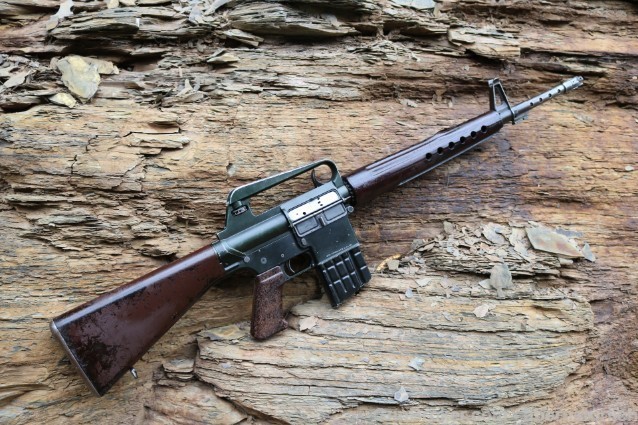 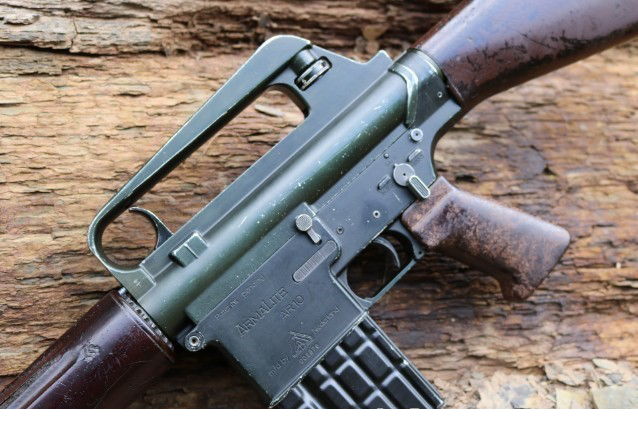 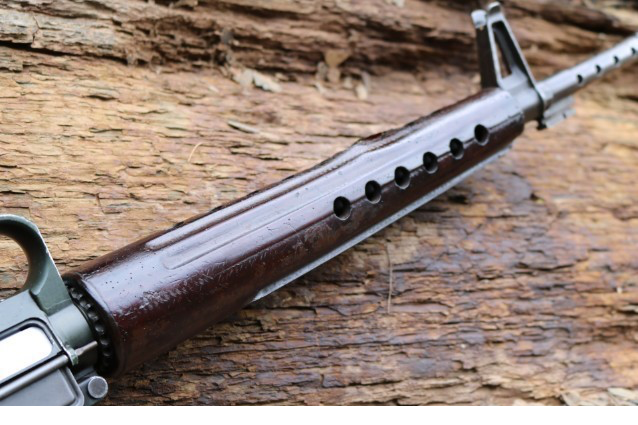 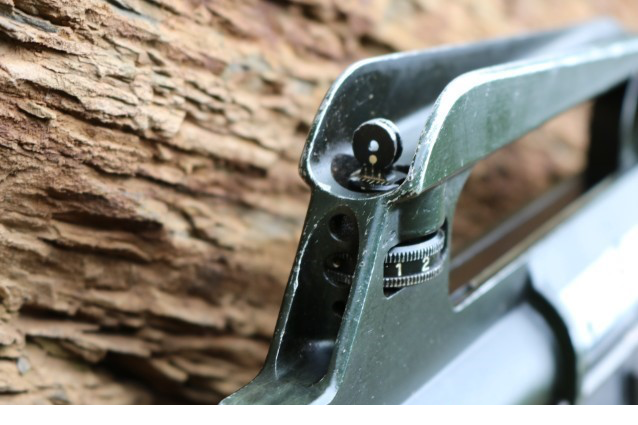 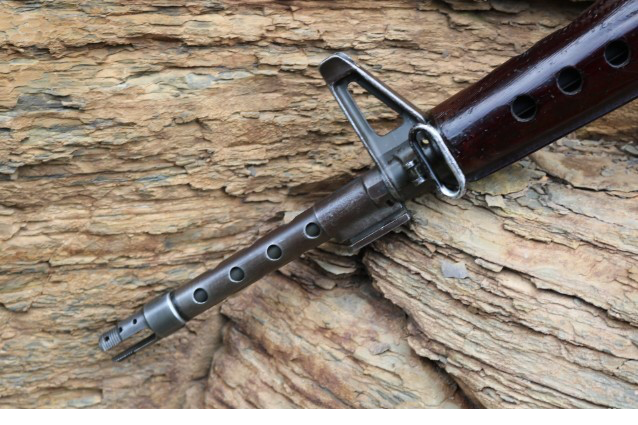 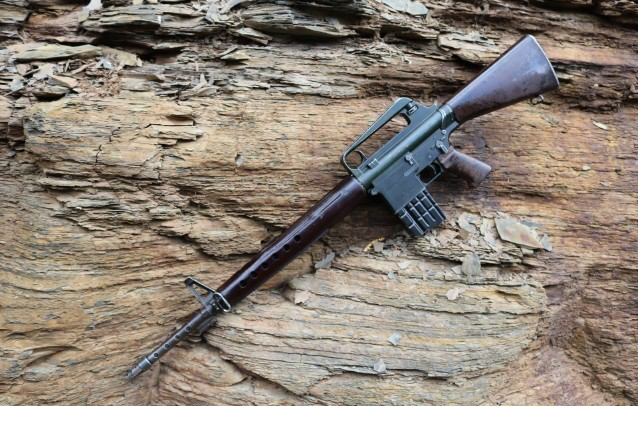 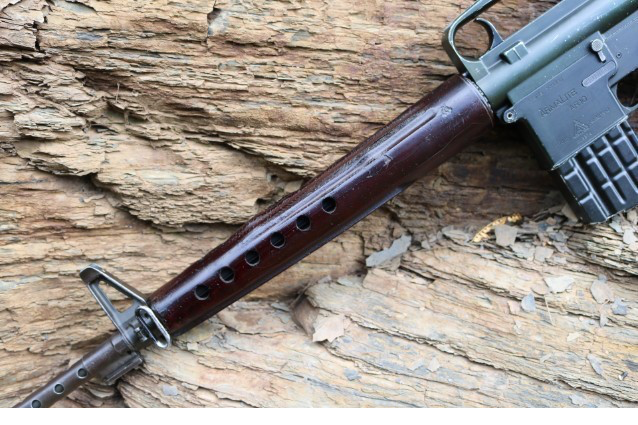 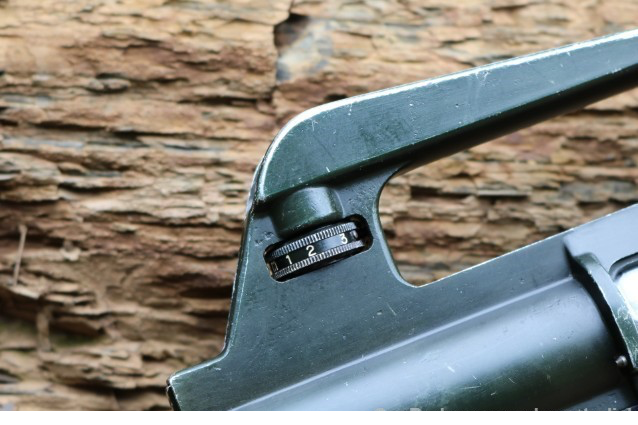 This is a PRE-MAY DEALER SAMPLE and can only be bought by a class 3 FFL holder. This cannot be owned by non-FFL holders! Selling a complete factory built select fire Armalite AR10 in 7.62x51mm. This is in very good condition. The rifle internally is in great shape and appears to have been carried a lot more than it was fired. The bore is bright and shiny and in very good condition! This is a Dutch built AR10 and was built in the Netherlands in the late 1950's. I belive that this is a Guatemala contract AR-10. This will ship in a hard case insured for the final auction amount. This is in dealer inventory and ready to ship! This is a beautiful example of an extremely scarce, all original Armalite designed AR-10 fully automatic rifle as produced by the Dutch company of Artillerie-Inrichtengen (AI). As noted this rifle is a fully functional, pre-may sanmple class III weapon. The left side of the receiver is marked "Patents pending/ARMALITE/AR10/mfg. by AI Nederland". It is fitted with the brown fiberglass buttstock and pistol grip. The complete bolt and bolt carrier assembly is correctly all chrome plated. It has the original grenade launcher fitted to the end of the barrel with the original front and rear sight. This exceptional rifle is complete with an original "Armalite" marked waffle pattern 20 round magazine. These rifles are extremely rare today as very few were actually produced. The company that started this all can trace their origins to the efforts of two men; engineer/attorney George Sullivan and inventor Jacques Michault who teamed up together and sought to design and build military-style rifles that represented a radical departure from all others in the form of rifles that featured lightweight aluminum receivers, straight-line fiberglass stocks, high-line sights, and receiver-mounted carrying handles. Sullivan later met with Richard S. Boutelle, president of Fairchild, and told him of his efforts. Boutelle was interested in this project, and as a result, the ArmaLite Division was founded in 1954 as a subsidiary of Fairchild Engine and Airplane Corporation. Later that year Eugene Stoner, a former U.S. Marine and ordnance technician, became ArmaLite's chief engineer. Stoner, along with designer L. James Sullivan and supervisor Robert Fremont, who as a team later developed several designs under the Armalite name that could be licensed to manufacturers for actual production. By early 1957, three successive prototypes had been built, tested, and improved upon to the point where serious efforts could be made to find a production facility to handle the proposed manufacturing quantities. ArmaLite-Fairchild partner Richard Boutelle used his inside track with the Dutch Government to secure a deal with the government-owned firm of Artillerie-Inrichtingen, to invest and produce these new radical designed rifles for sale on the world wide market. Unfortunately, there were some significant production delays due to the problems converting the Technical Data Package from the US standard "inches" to European standard "metric" dimensions. Because of this, it is estimated approximately 3,000-4,000 rifles in total were actually produced, split between the Guatemala, Sudan and Portugal, contracts, with several large orders lost to the Belgian-designed FN-FAL rifle. In 1959, ArmaLite revoked the Dutch license and awarded it to the famous American gunmaker Colt. The US Army never adopted an AR-10 type of rifle until the early 1960s when the company of Fairchild-Hillar and Colt approached then Secretary of Defense Robert McNamara with the totally redesigned Colt AR15/M16 rifle in 5.56mm and the rest is history. This is the exact firearm that you will receive! I am a FFL and this is in dealer inventory, meaning that it will transfer tax free to a FFL in your state. I will e-file the ATF paperwork, current e-file transfer times are only 1-2 days! This is IN-STOCK and ready to transfer, this is the exact weapon you will receive! Payment USPS Money Order, Money Order, Certified Check