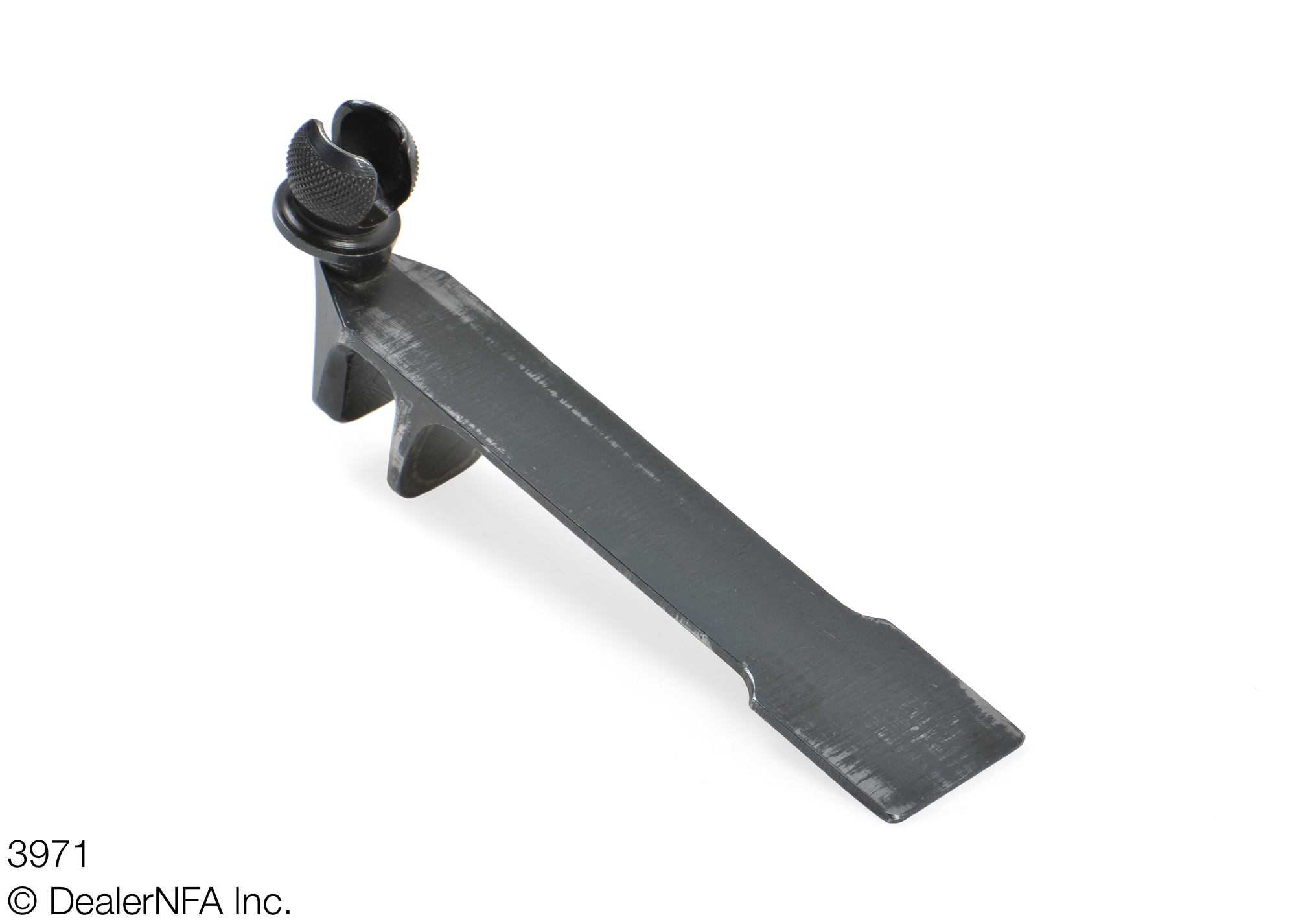 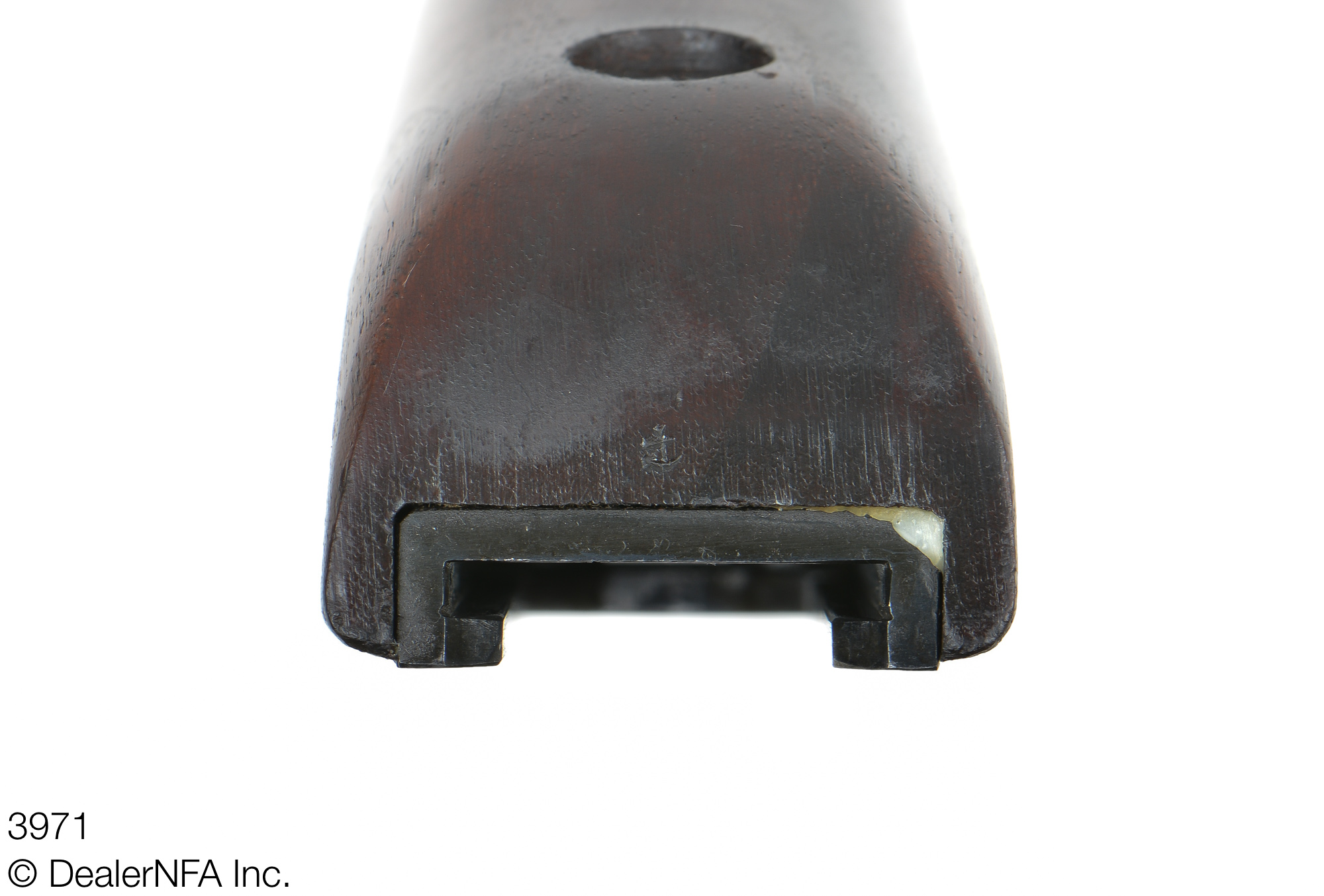 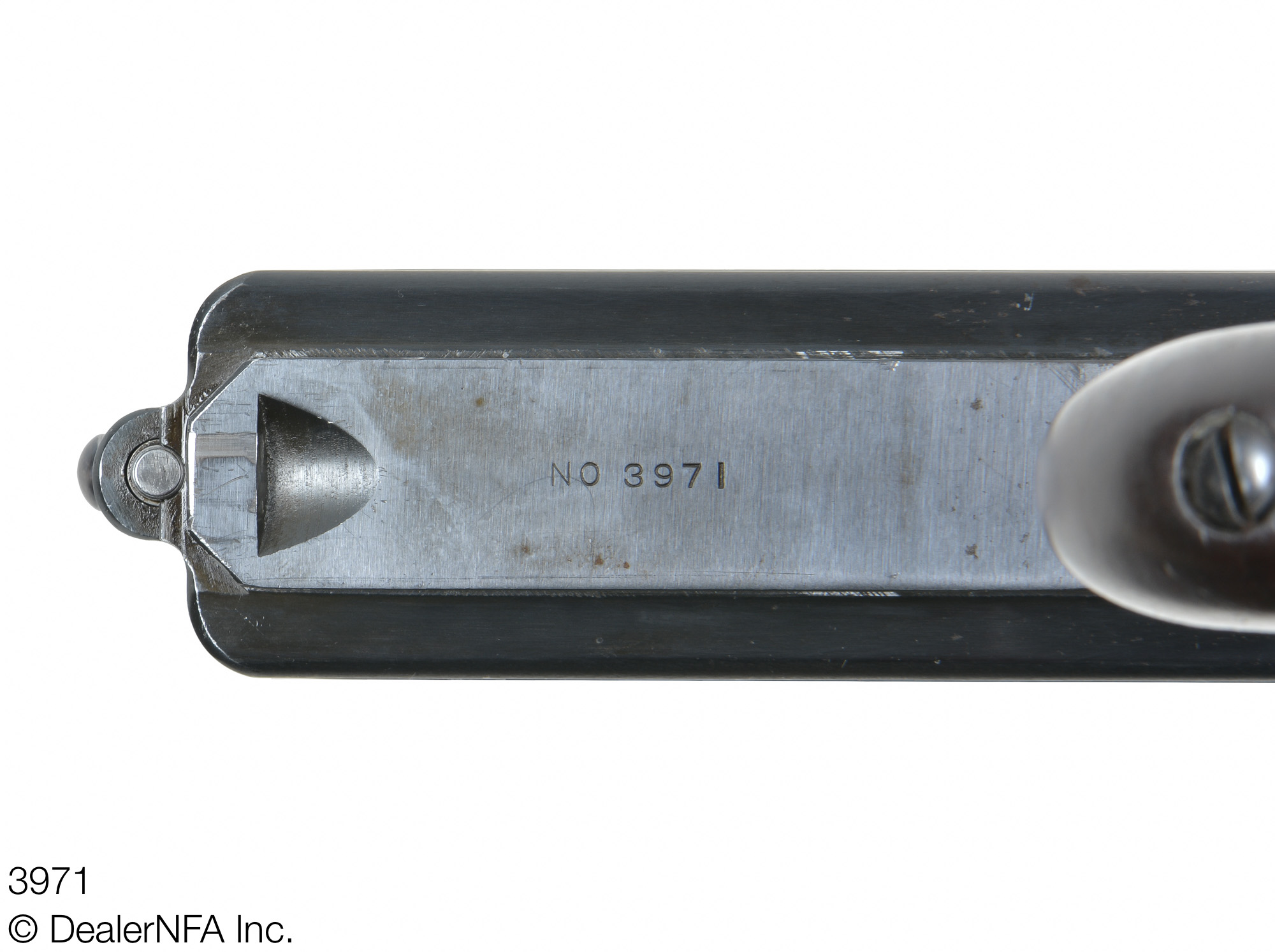 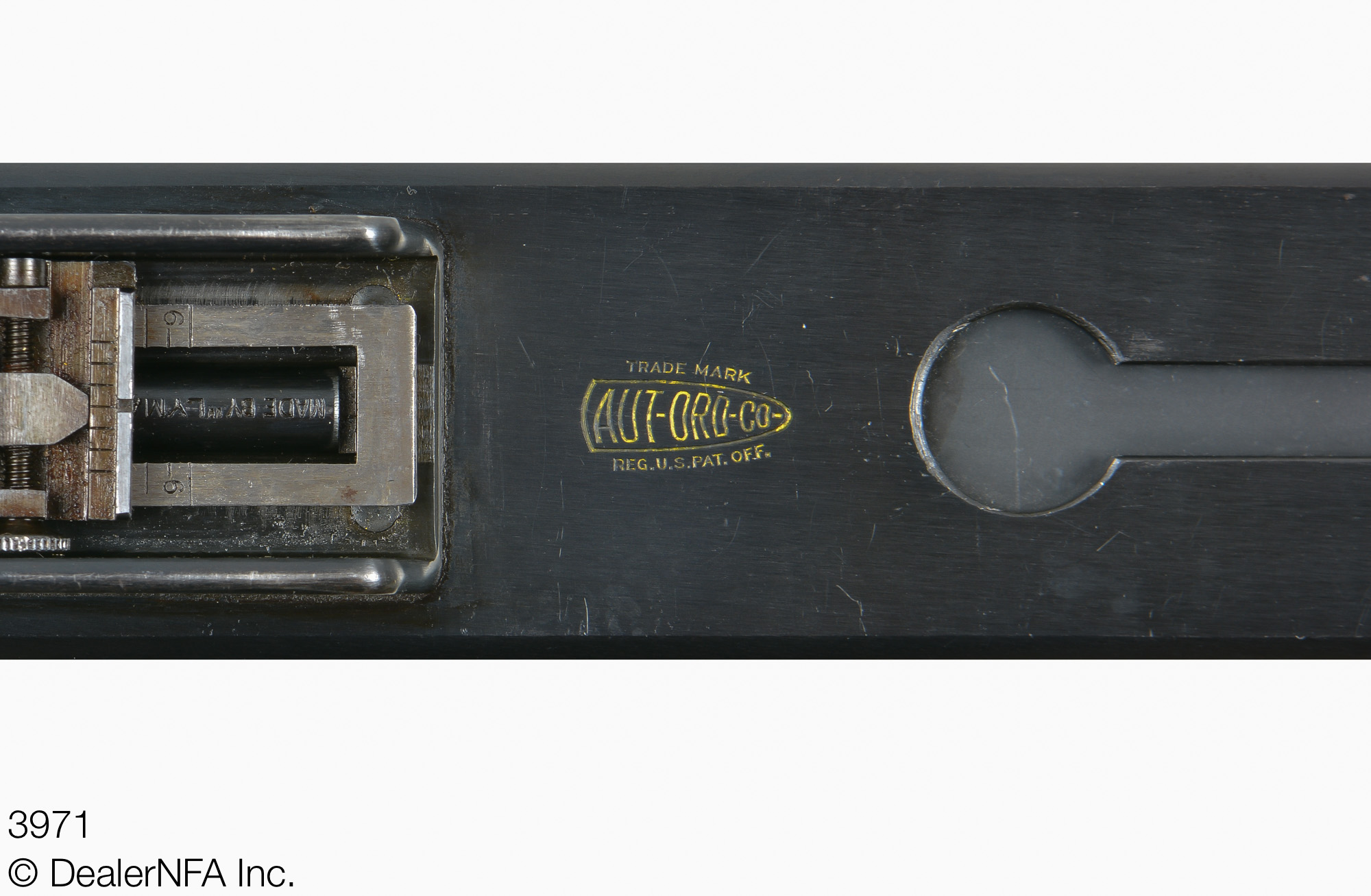 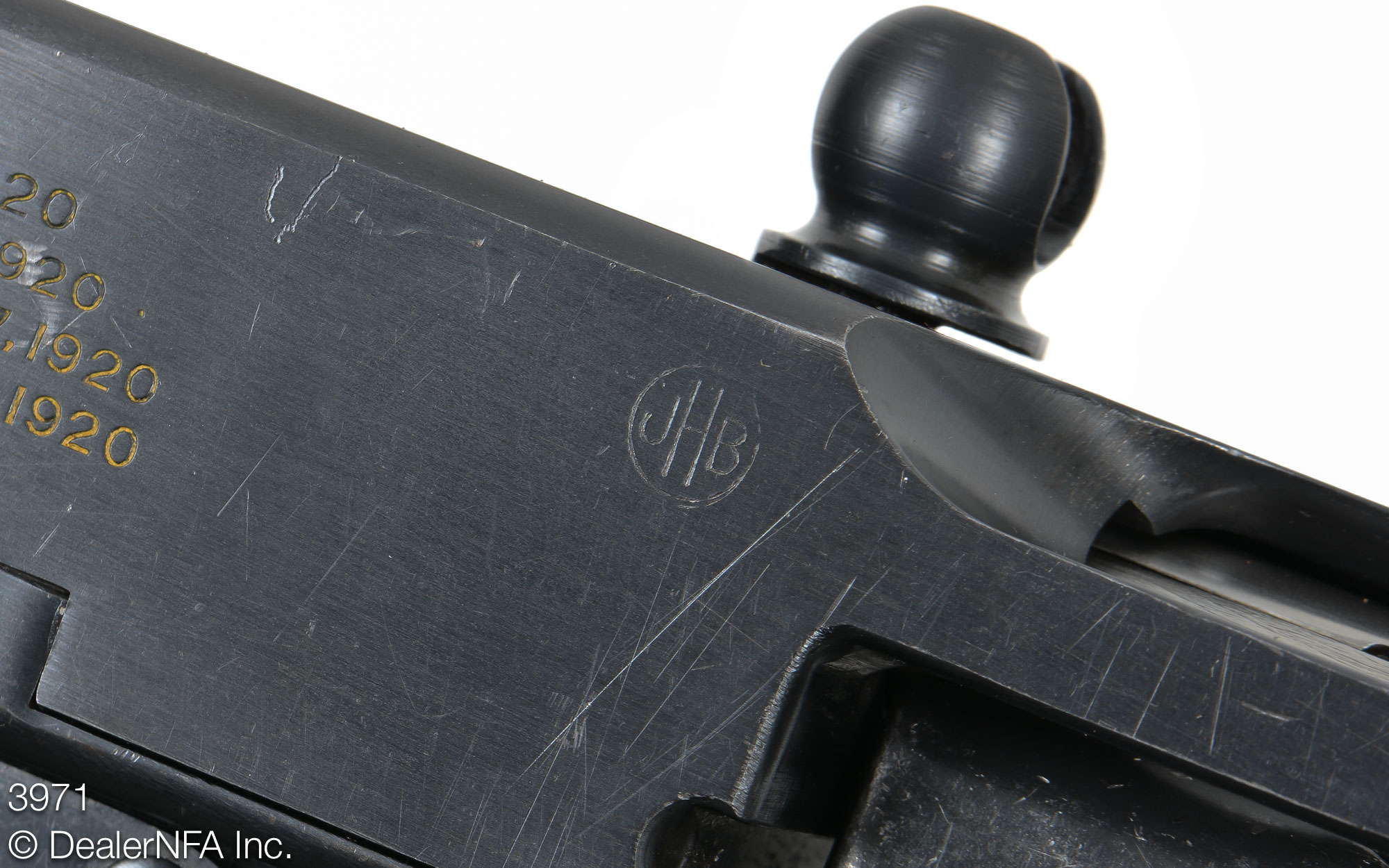 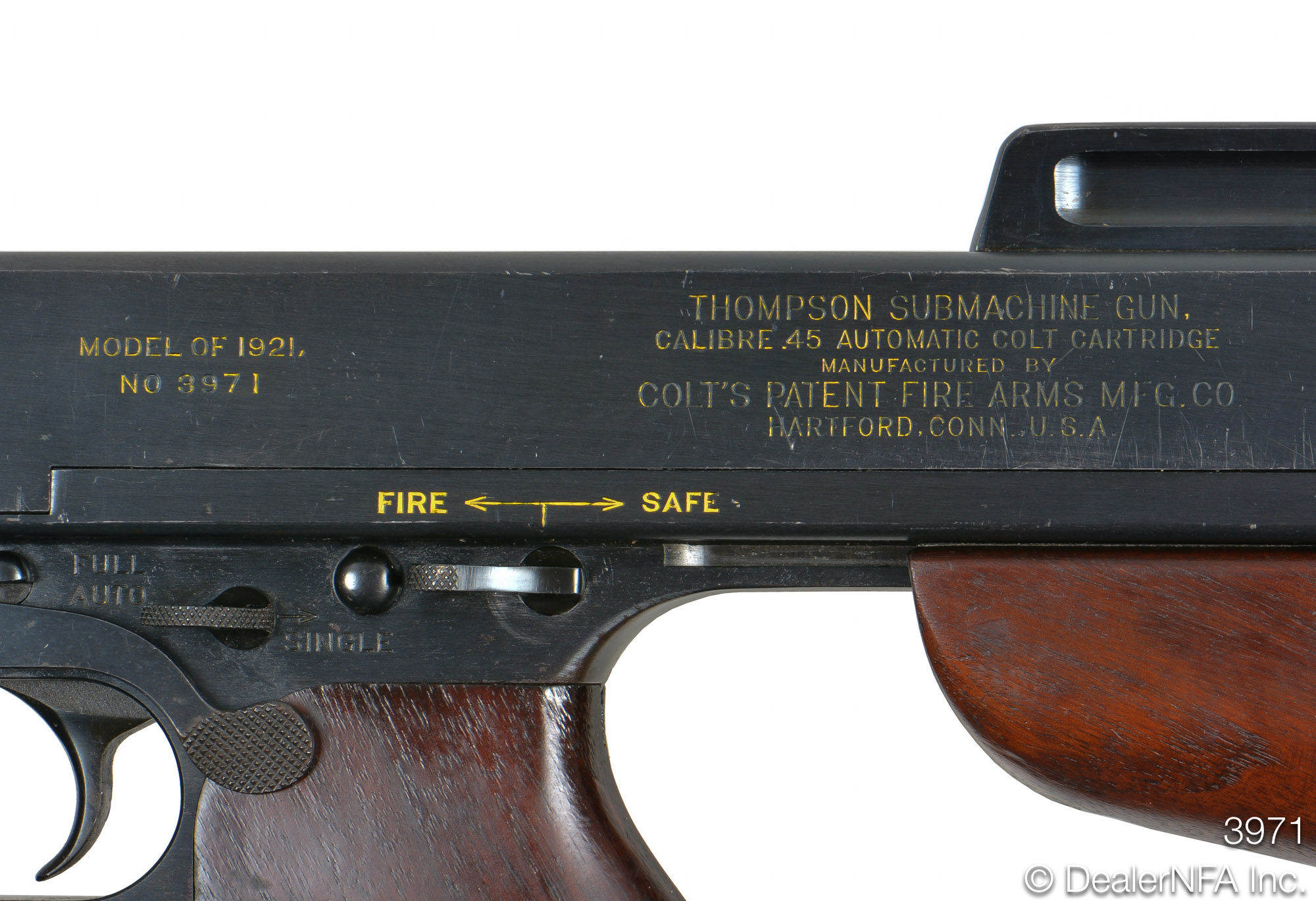 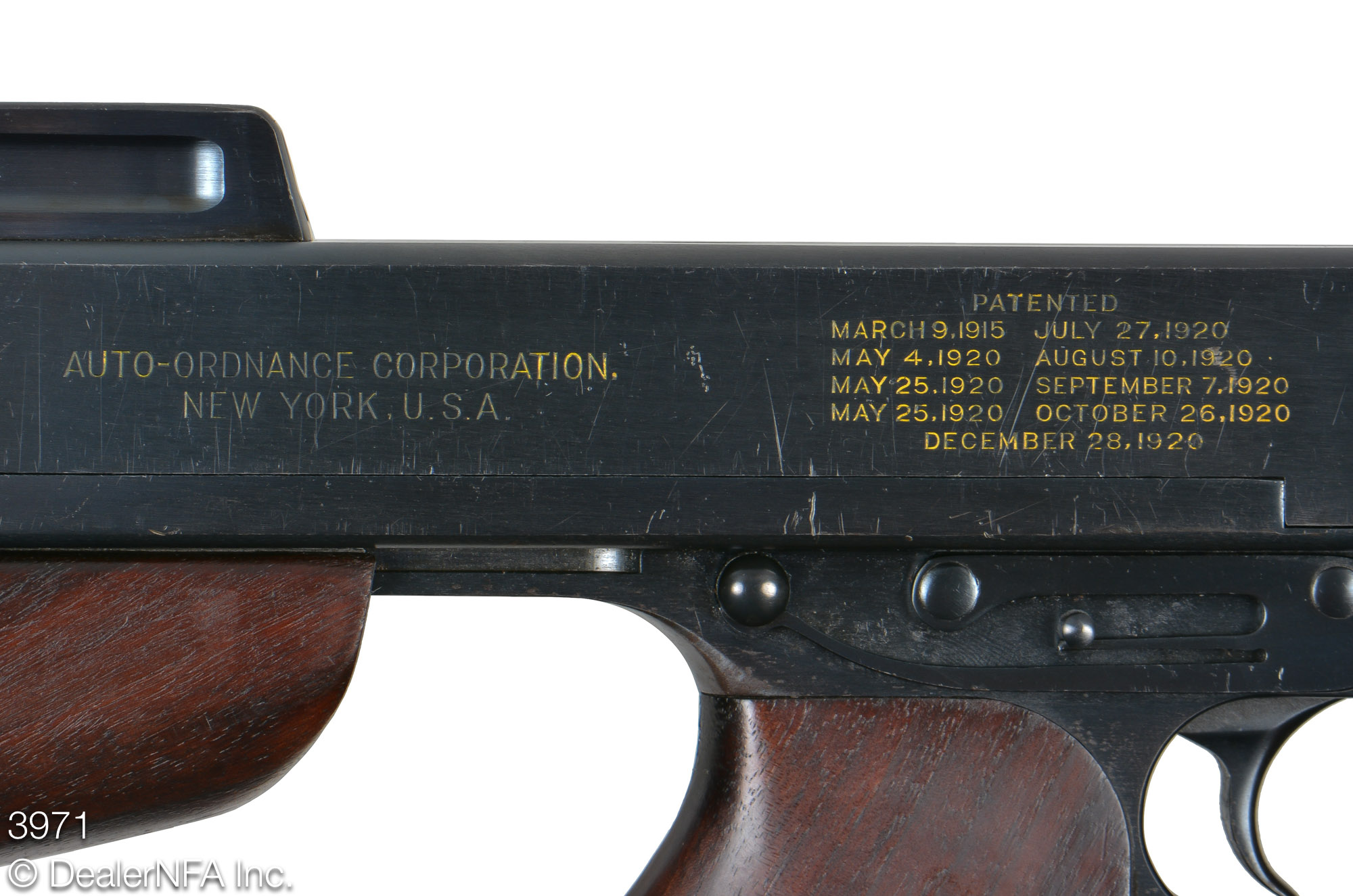 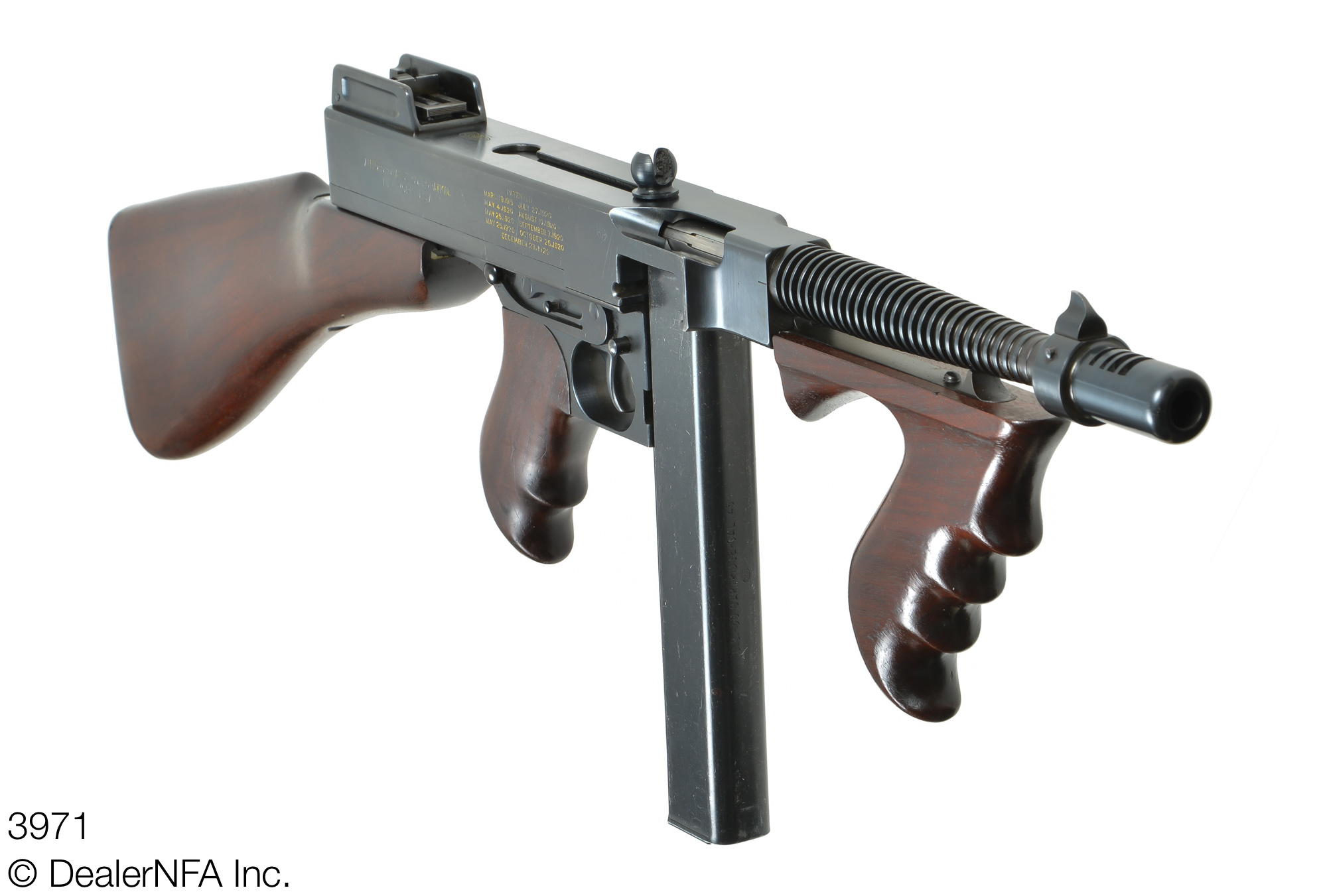 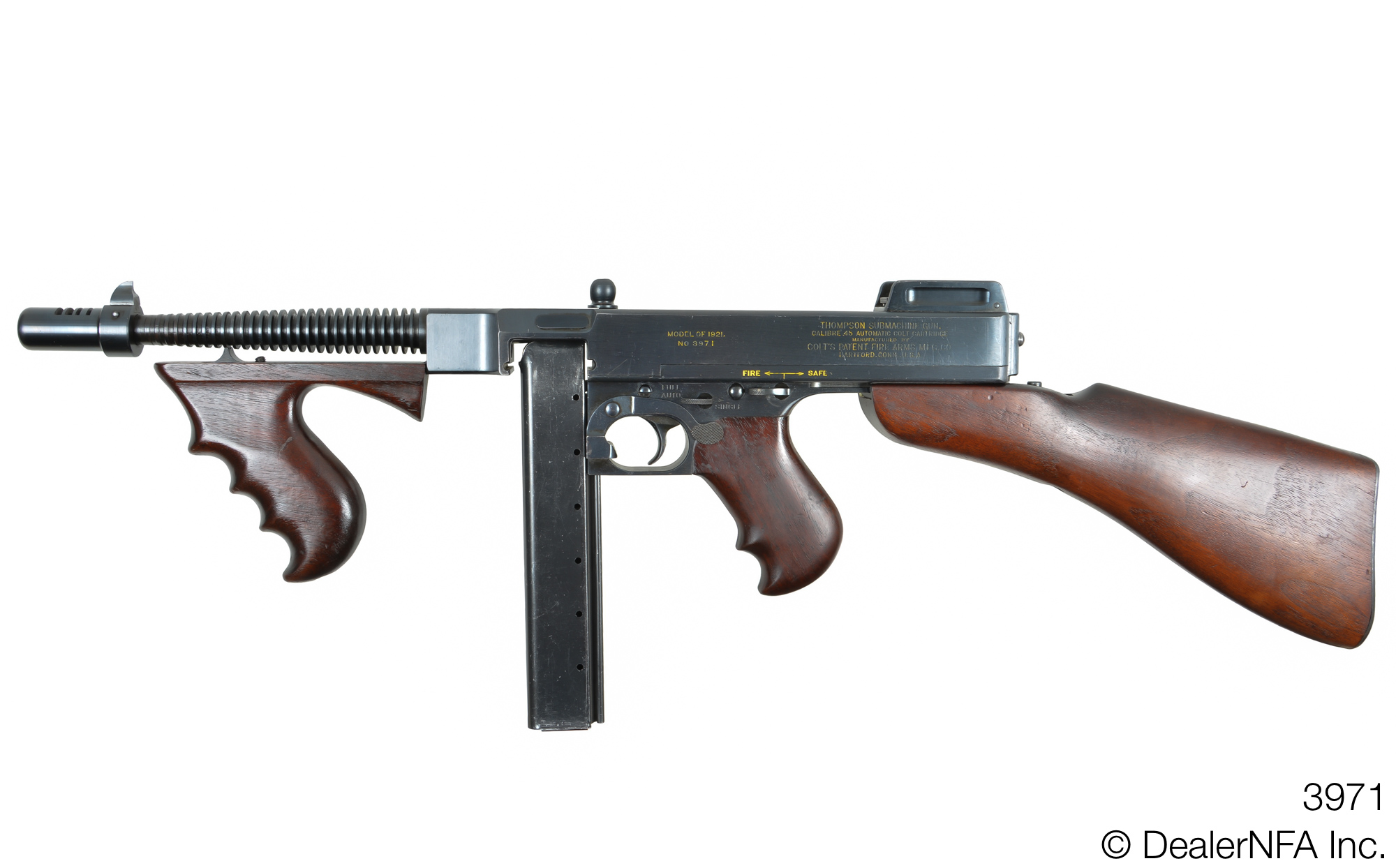 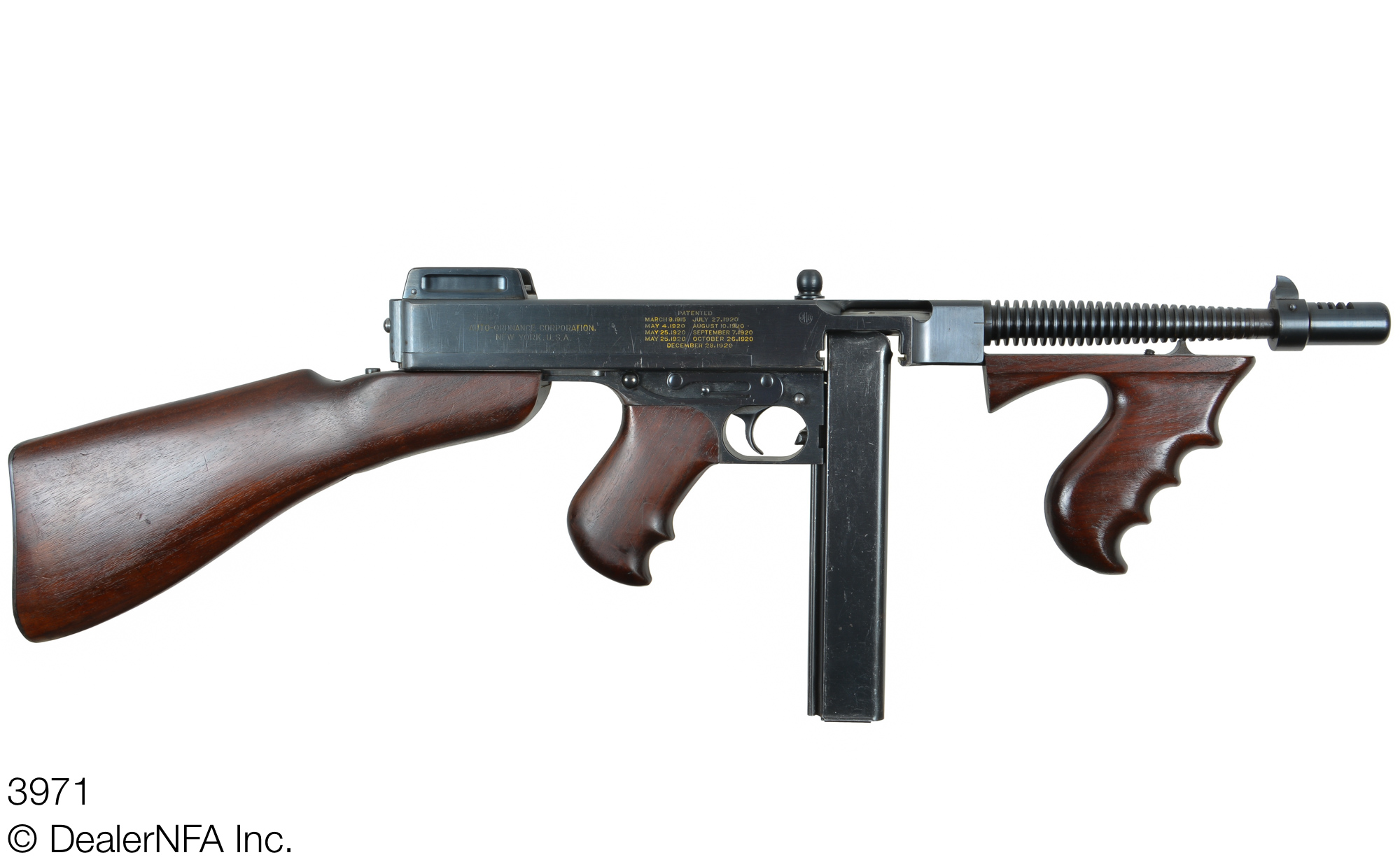 Colt Thompson Serial 3971 Offered for sale is an Auto-Ordnance Model of 1921 (AC) Thompson Submachine Gun, serial number 3971, which was manufactured by Colt’s Patent Firearms Manufacturing Company for Auto-Ordnance Corporation between 7 29 1921 and 8 27 1921.  This is one of the original 15,000 Colt Thompsons, which range in serial number from 41 to 15040.  Colt Thompsons were originally manufactured in 1921A configuration, without a compensator, and were marked “Model of 1921.”  This one is marked in that manner, and had the option of a Cutts Compensator added, which makes it a “1921AC.” This is a very unique Colt Thompson.   It has its beautiful, original finish, and an 8-inch barrel.  A normal Thompson barrel length is 10.5 inches.  To the knowledge of this writer, this is the only 8-inch barrel example that has been seen in the United States.  This writer is aware of 3 others in the world, all of which are in Latin America, and appear the same as 3971.   This particular Thompson was previously owned by the Columbus, Ohio Police Department, and was originally sold by famous Auto-Ordnance salesman E.E. Richardson on behalf of the Frank P. Hall Company to the Columbus, Ohio P.D. Regarding the 8” barrel, it is possible that at some point in its life that the barrel could have had a squib load fired, and the barrel could have become bulged past its current 8” length, and was thereafter shortened to 8 inches.  This is speculation, though, and there is no evidence of a squib.  The barrel lines up on its index mark, and is an original Colt barrel.  It could have been made this way by Colt, or modified by someone at Colt, Auto-Ordnance, or afterwards.  We don’t know for certain.  The Thompson was registered in 1934, and a copy of the original paperwork is available to a potential buyer. This was a police Thompson, though it appears to have had very little use.  It has some freckling to the finish on its wrist, and various patina to its overall finish, but is definitely a higher condition Colt Thompson.  The receiver and the lower frame serial numbers match.  The buttstock has the correct anchor marking on its nose, indicating it was manufactured by Remington for Colt.  The rear grip, and the vertical foregrip are also original. It features patent dates, as well as a “JHB” inspector marking on the right side of the receiver to indicate inspection for Auto-Ordnance by Chief Inspector John H. Barrett.  It also features the desirable, early “AUT-ORD-CO” bullet logo on the top of the receiver, and has the first style of compensator.  The weapon has a reproduction 1921 actuator installed in it currently, and also comes with its original 1921 actuator.  In the video that accompanies this ad, the weapon was fired on 1 19 19 in Miami, FL by David Albert with the reproduction 1921 actuator installed. This is an extraordinary example of a Police Department Colt Thompson, and it will stand out immediately in any Thompson collection.  Other collectors will flock to it, based on its unique barrel length.  Having been sold by E.E. Richardson makes its provenance even more interesting.  Mr. Richardson was Auto-Ordnance’ top salesman, and when Auto-Ordnance made the decision to only sell through Federal Laboratories in the early 1930’s, he became a salesman for Fed Labs, selling Thompsons, and eventually Reising Submachine guns, among other law enforcement products.  Much good historical information exists regarding E.E. Richardson, and can be read in William J. Helmer’s classic 1969 Thompson book, “The Gun That Made the Twenties Roar,” as well as Tracie L. Hill’s 2009 excellent work, “The Ultimate Thompson Book.” This Colt Thompson served “On The Side of Law and Order.” With its buttstock removed, a 20-round magazine installed, and the 8-inch barrel, this would have been quite a compact bit of firepower in its heyday.  It will be an exceptional addition to any collection today. $39,995 As with all DealerNFA, Inc. guns, this item is owned by us, and in stock at our Miami office, where it is available for inspection or eForm transfer to a dealer in your state. Florida residents are subject to Florida Sales tax. Dealernfa, Inc Ruben Mendiola President For the quickest response, please contact us through our toll free number from 8 00 AM to 9 00 PM (Eastern) or by email. 305-271-3436 866-NFA-WANT (866-632-9268) Toll Free 866-415-7066 Toll Free Fax Please visit our website for more detailed images that can be magnified at dealernfa.com  Facebook Instagram Always looking for and paying top dollar for high quality legally registered machine gun, please either call me on my Toll Free line, email or fax. I pay the ATF transfer tax and payment is sent overnight. Class III Dealer since 1985. Dealing with high quality legal firearms is not a hobby but my profession; you will receive well deserved fast professional service. Serving you personally 7 days a week from 8 00 AM to 9 00 PM (Eastern)

This form sends an email to the lister: Dealer NFA. Inc regarding listing #1735486