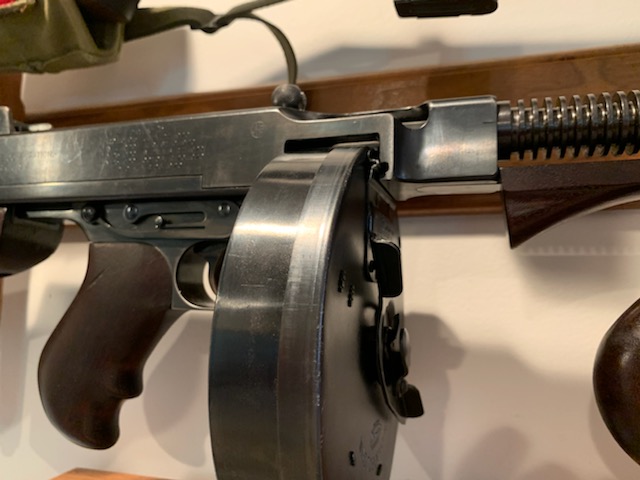 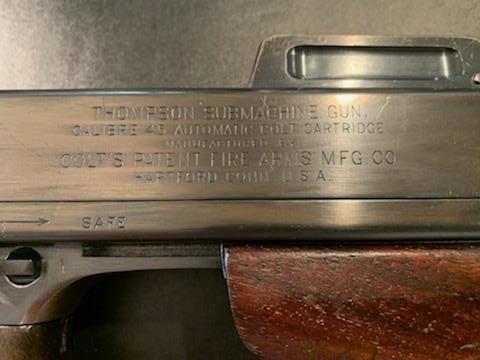 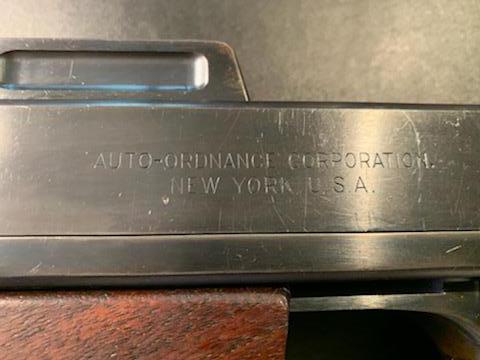 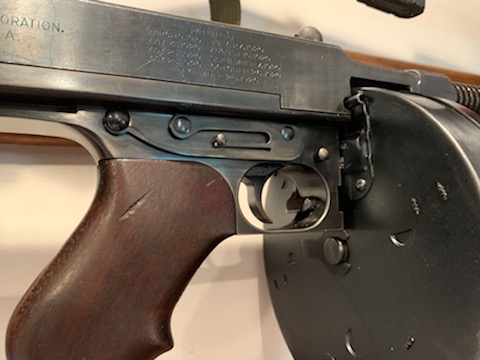 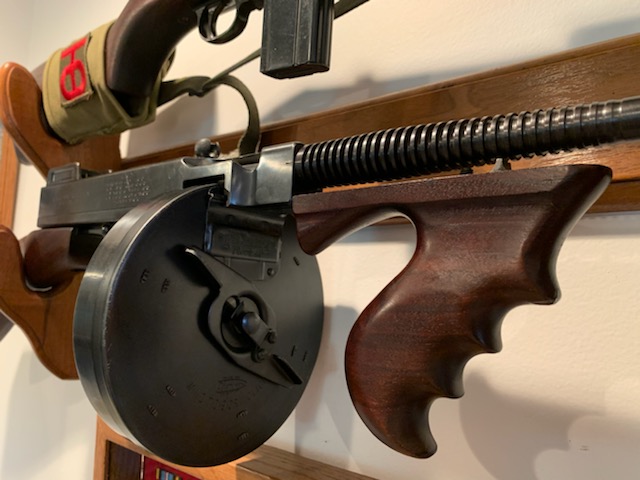 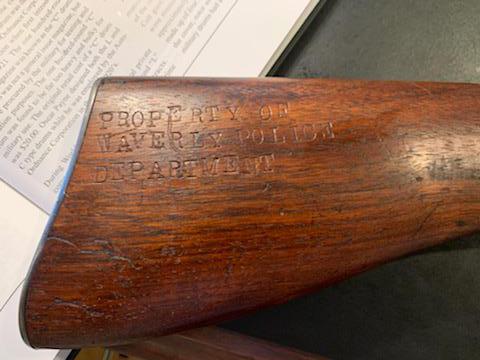 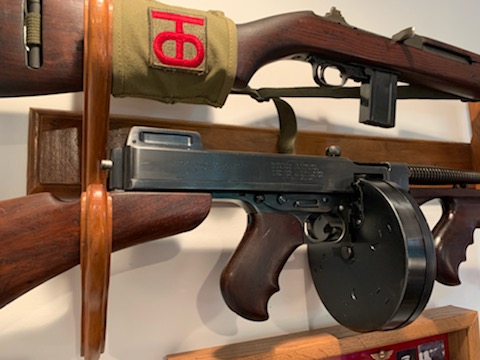 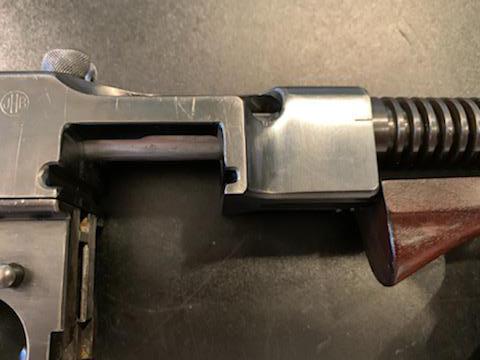 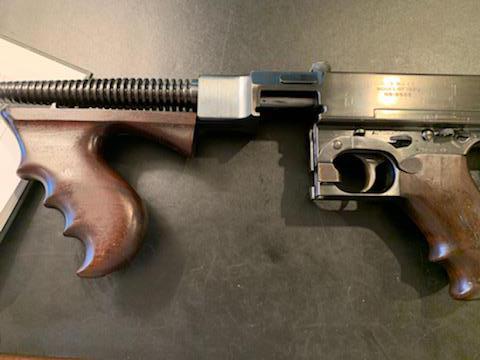 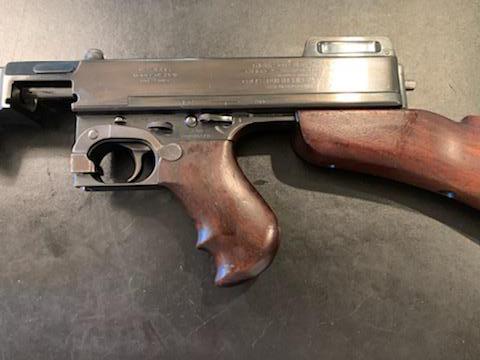 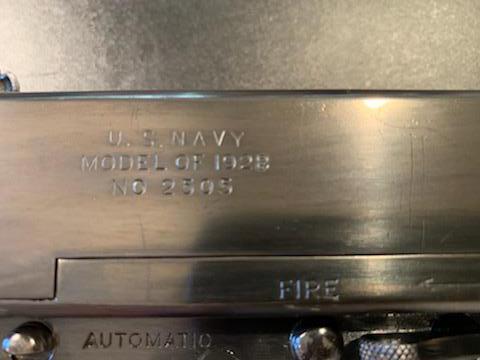 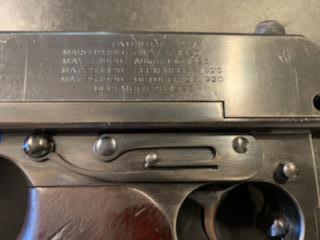 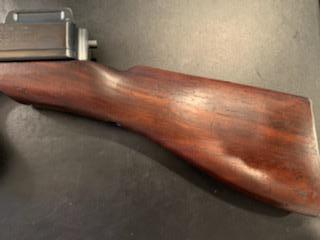 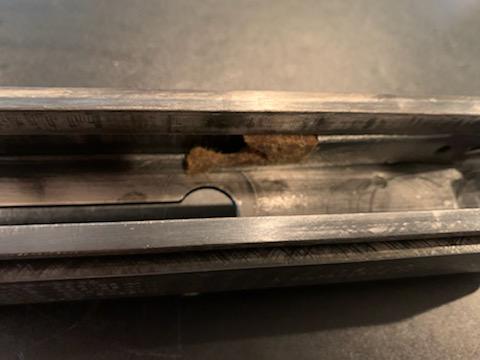 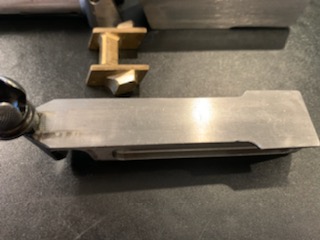 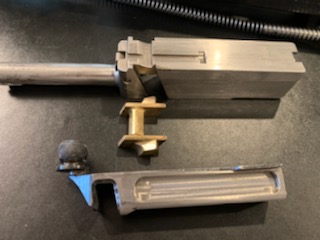 The following information was compiled using published literature and in person interviews.
Von Lengerke & Detmold CO 349 Madison Ave New York City NY (1 of 12) 1921
2505 was sold to the Nassau Co Police Department Long Island N.Y. as one of 10 guns between July 18th and July 23rd, 1921 as a Model 1921A.
The gun was returned to Auto Ordnance in 1928 to be reconfigured to "U.S. NAVY MODEL OF 1928". The left side of the receiver is marked "U.S. Navy/MODEL OF 1921" with the number "8" over stamped on top of the number "1" in 1921. A Cutts compensator was added in 1928
The top of the receiver is marked with the "Bullet" logo with "Aud Ord Corp" inside. The lower trigger housing is also correctly stamped with the matching serial number of 2505.
Excellent with 95% plus original blue finish overall on the receiver and matching trigger housing. The remaining portion of the weapon shows only slight edge and high spot wear overall with some minor scratches. The barrel was replaced by Nassau County sometime in their ownership. A common occurrence on Thompson SMG's.
The two-piece riveted and welded actuator, bolt and Blish lock are original to the gun.
Stock marked with the correct Remington anchor stamp with a matching numbered butt plate. and “Property of Waverly Police Department.” The grips are original to the gun. The ejector, magazine latch, safety and fire control lever are all original Model 1921 Colt/AO components.
Included with the gun is one early blued, 20-round magazines marked "PATENTED - AUG.24,1920/AUG.24, 1920-JAN.11, 1921" and a 1940 50 round drum marked Bridgeport type L and stamped “U”.
Purchased from Nassau County by Joe Miller (Miller’s Guns) Stroudsburg PA 1980
Purchased by Roger A. Cox (Author) Thompson Submachine Gun 1986, Law Inforcement Ordanance Co GA 8/2/86
Purchased by J Cor. June 30,1988

Purchased by NFA Sales 2020
This model came into being because the original Model 1921 SMG had a fairly high rate of fire (approximately 800 rds/min) and the military requested a slower more manageable rate of fire in the 600-700 rds/min range. The USMC had also been successfully using many of these weapons in the China and Nicaragua, so the Auto Ordnance company decided to convert the 1921 models to the slower cyclic rate of fire and remark their inventory with the intent of developing a new model (the U.S. Navy Model of 1928) meeting the military requirements and to help improve lagging sales and pique interest with police and government agencies. The basic difference between the original 1921 and 1928 configurations is that they increased the weight of the actuator, to reduce the cyclic rate of fire and also modified the firing pin assembly.
The right side is marked with five lines of patent dates along with the two-line "AUTO-ORDNANCE CORPORATION/NEW YORK, U.S.A". The left rear side of the receiver is marked: "THOMPSON SUBMACHINE GUN/CALIBRE .45 AUTOMATIC COLT CARTRIDGE/MANUFACTURED BY/COLT'S PATENT FIRE ARMS MFG. CO./HARTFORD, CONN. U.S.A."
Colt manufactured 15,000 Thompson Submachine Guns for the Auto-Ordnance Corporation in 1921. The original Model 1921 design featured a finned barrel with no compensator, pistol grip forearm, and had a rate of fire of approximately 800 rounds per minute. All of the Colt Thompsons had the Colt high polish commercial blue finish, were fitted with Lyman folding adjustable leaf sights and had straight grain, oil-finished, American walnut stocks, pistol grips and forearms.