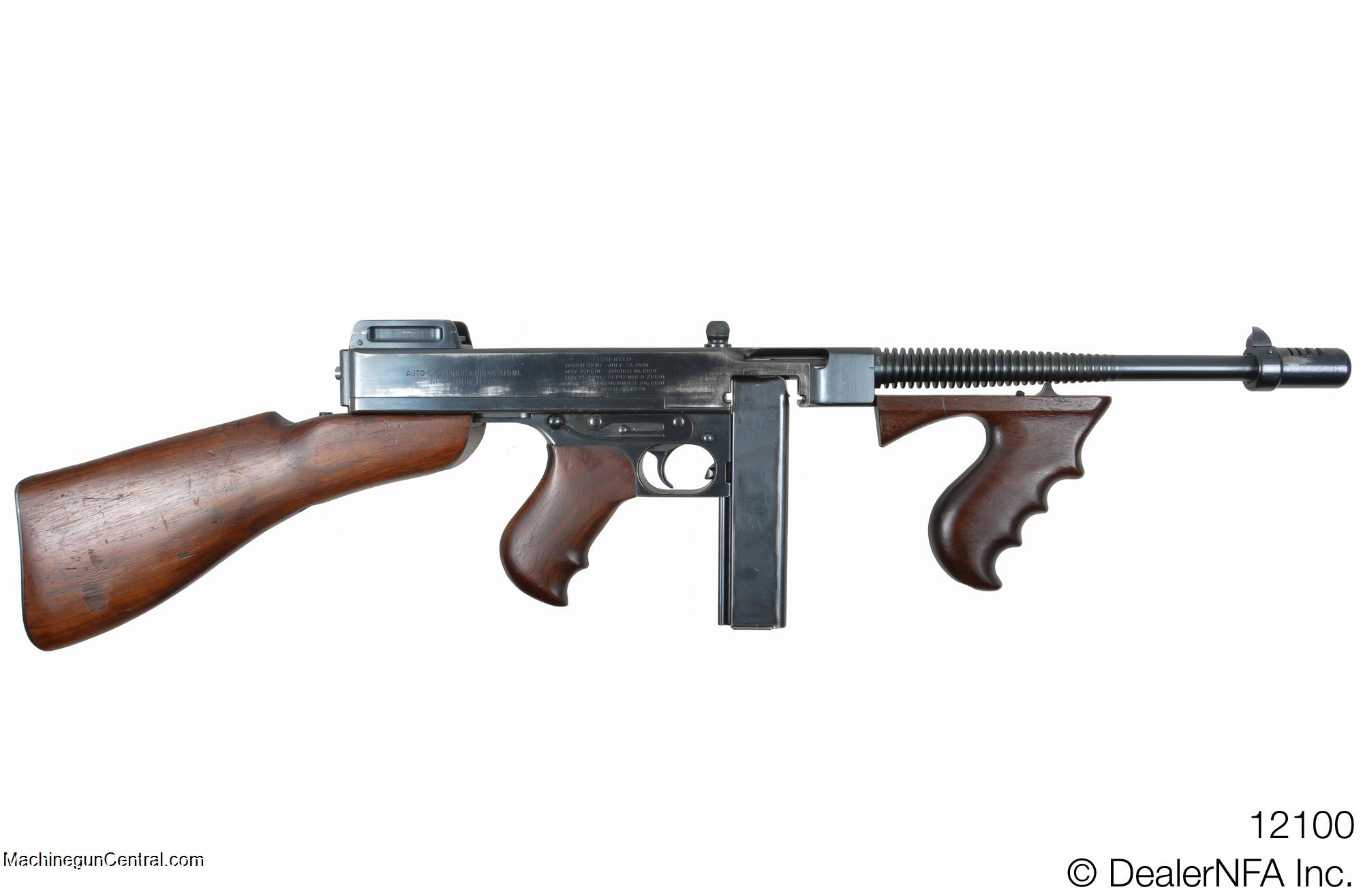 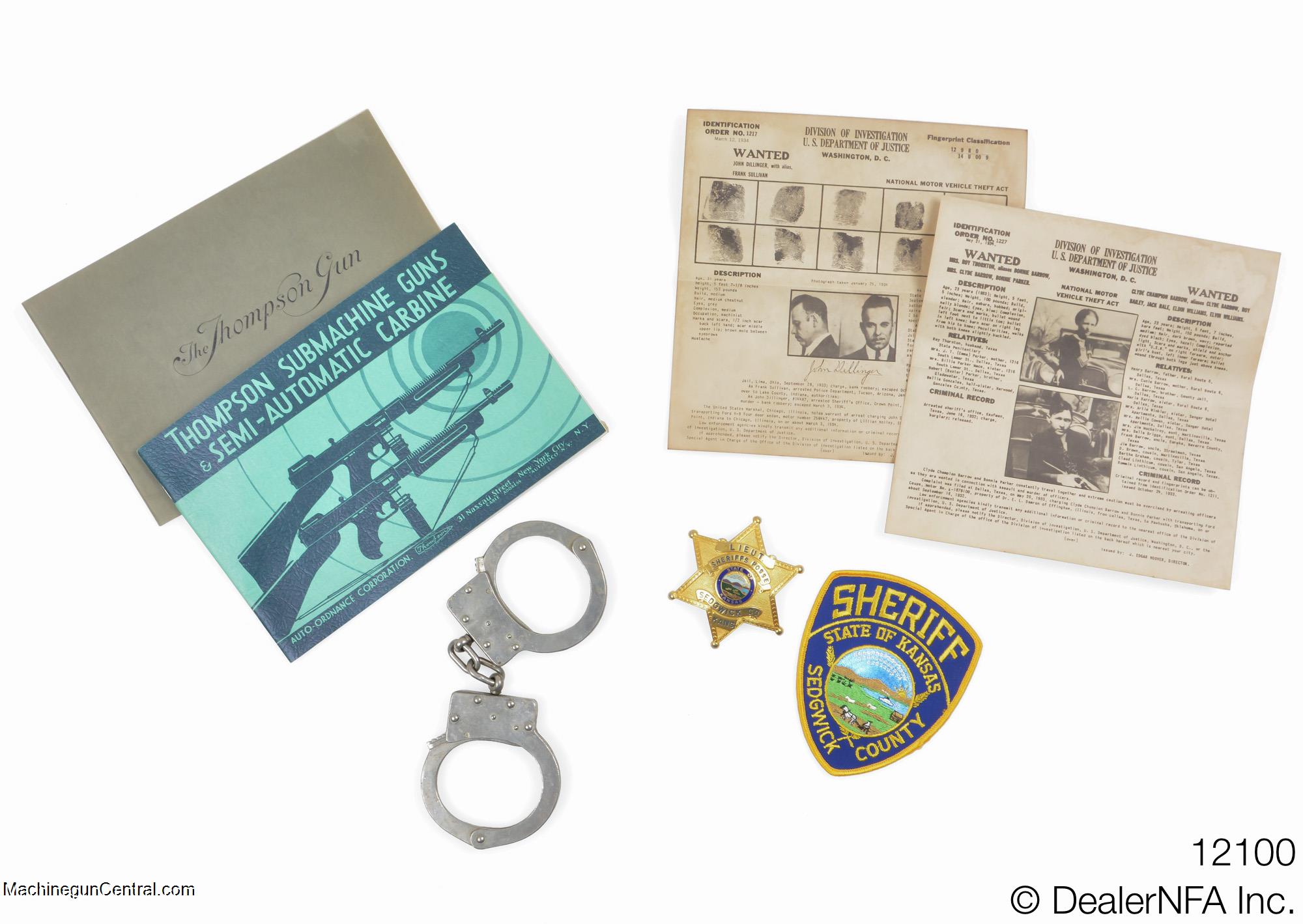 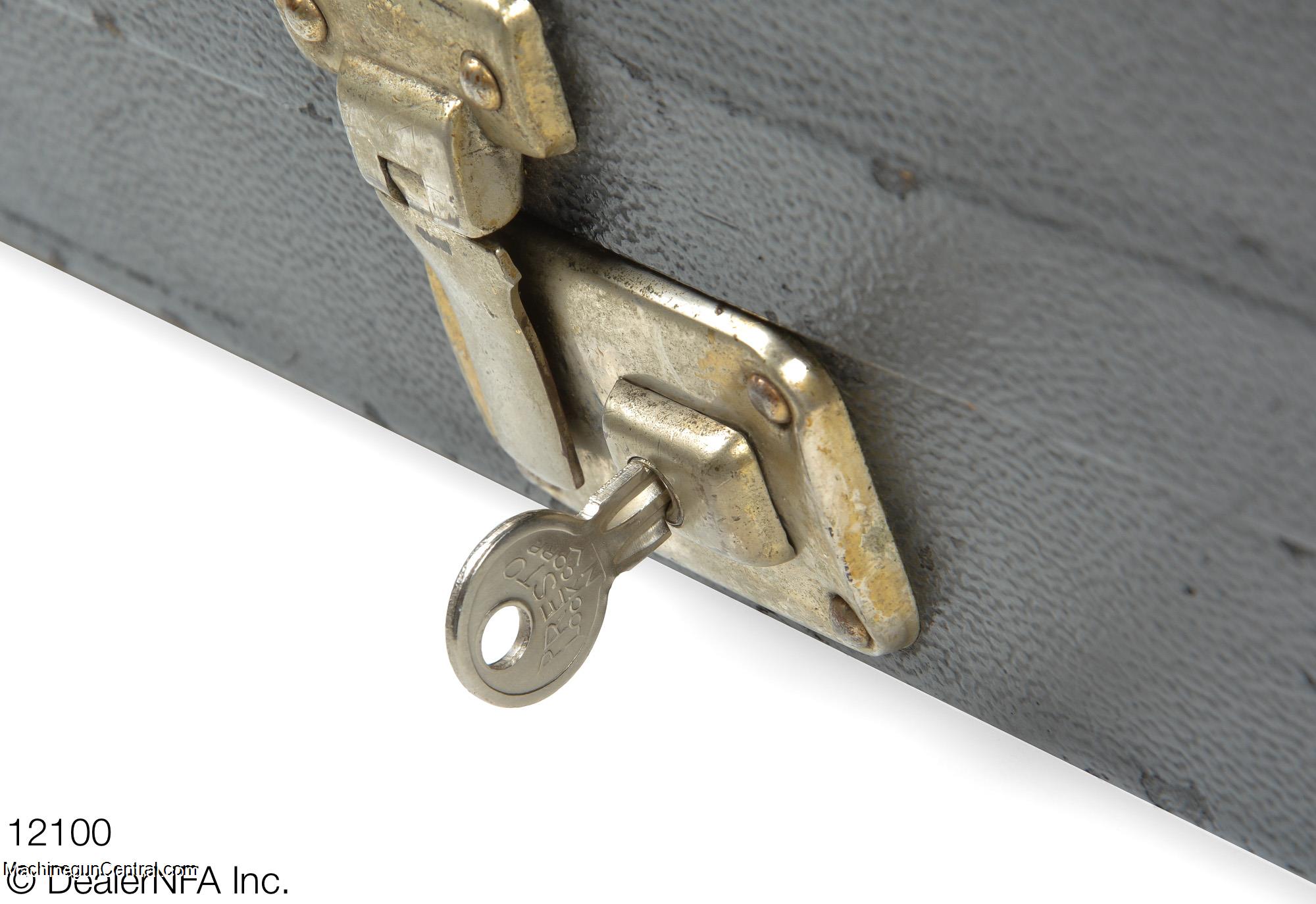 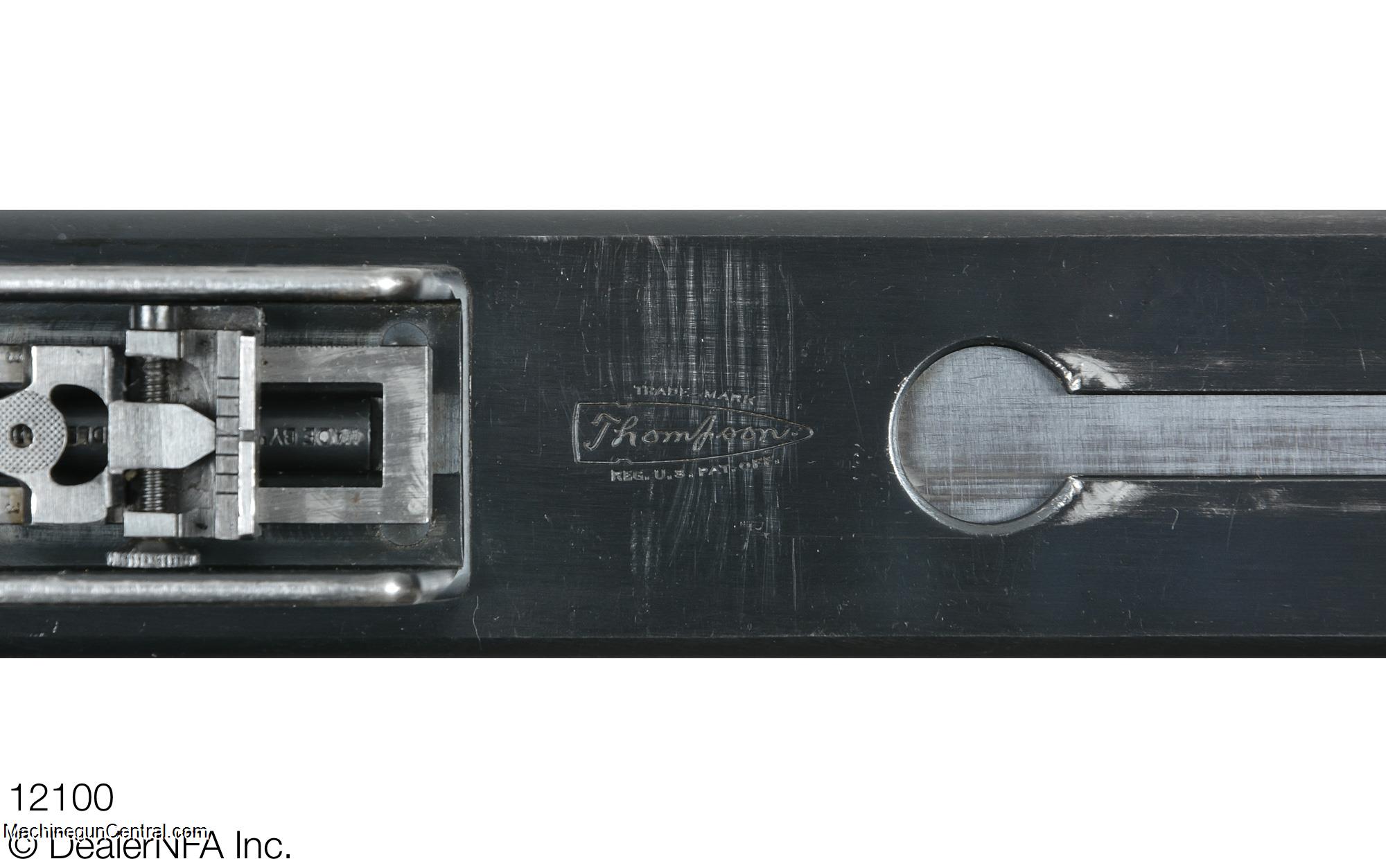 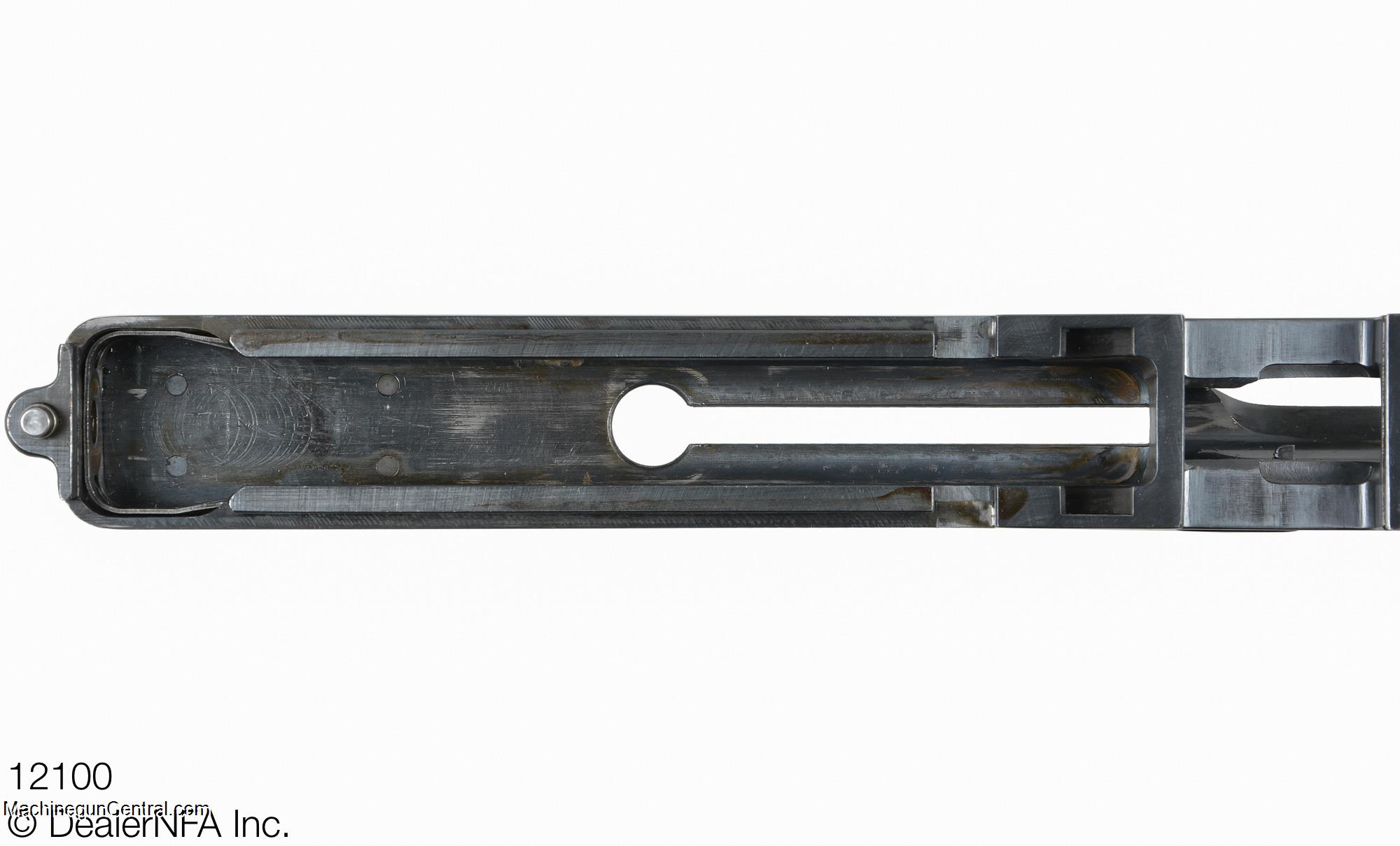 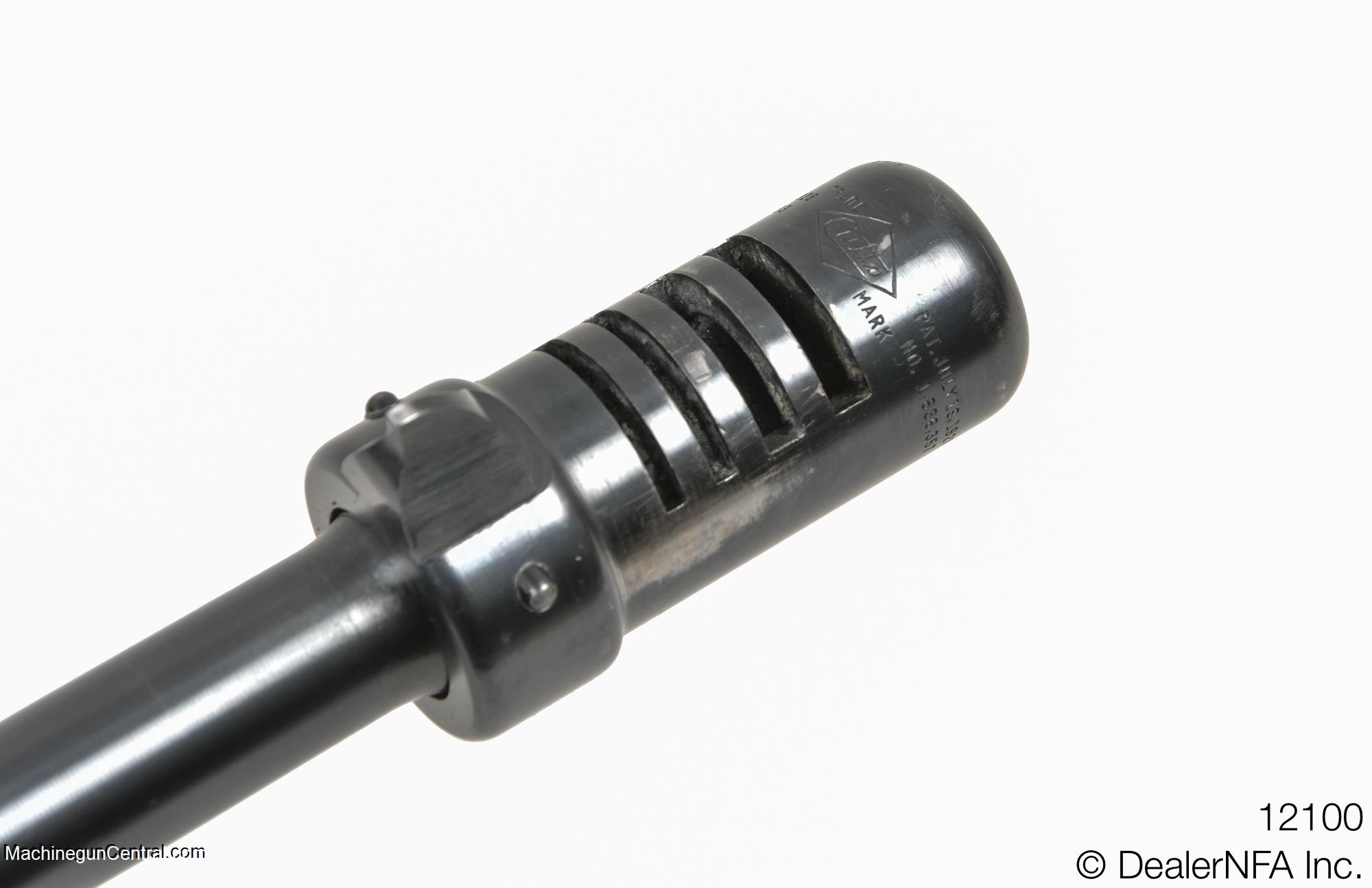 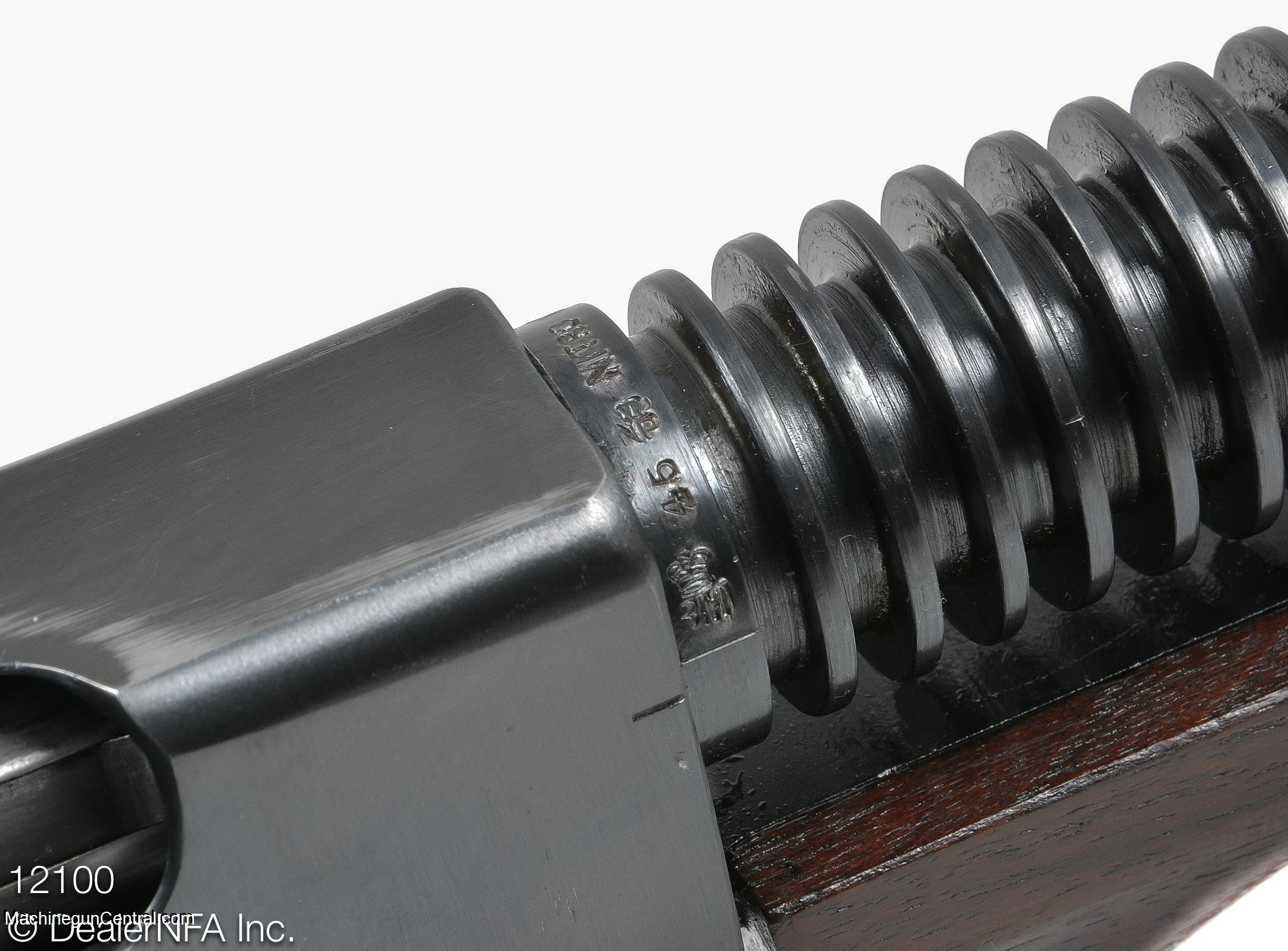 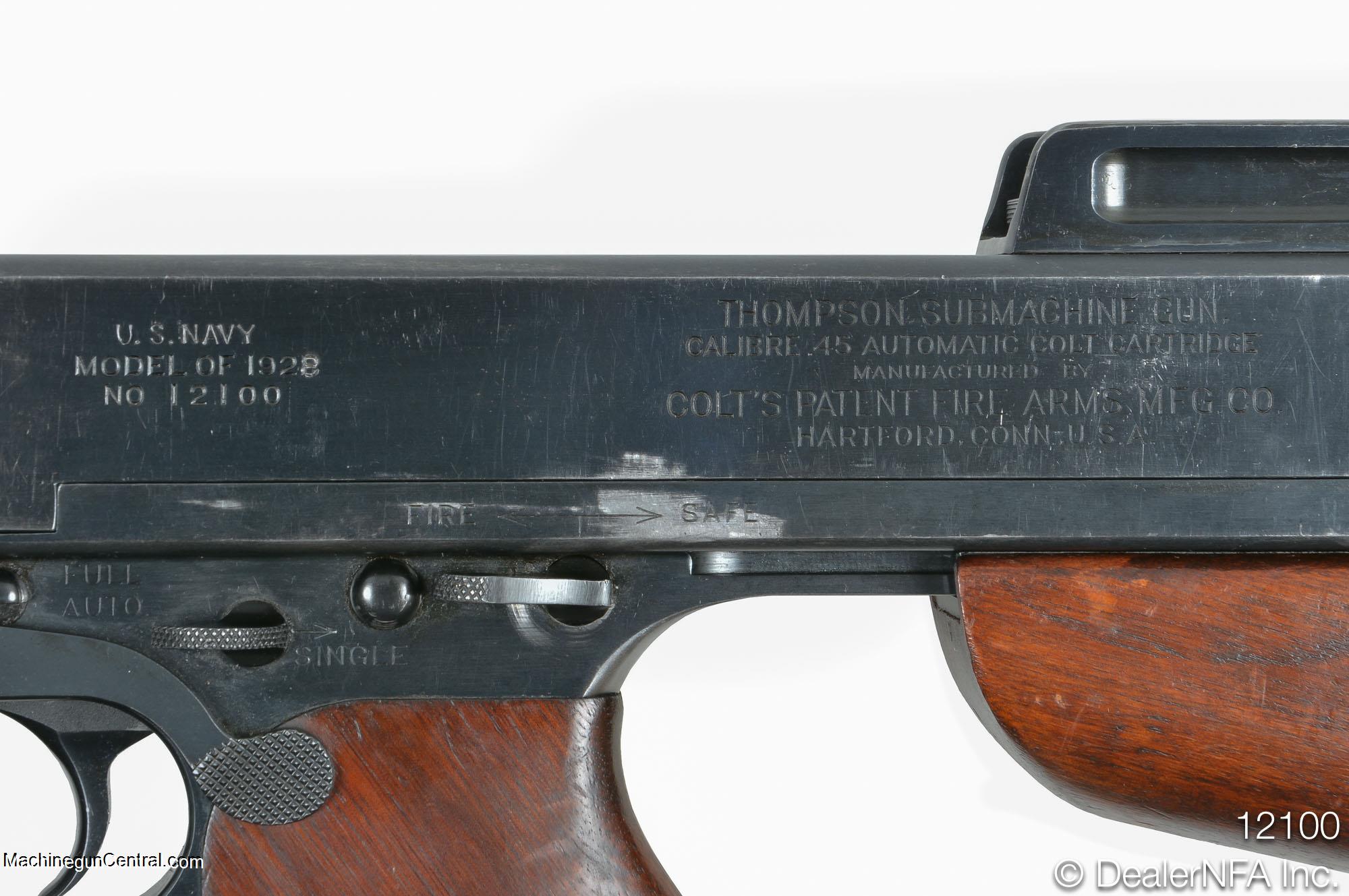 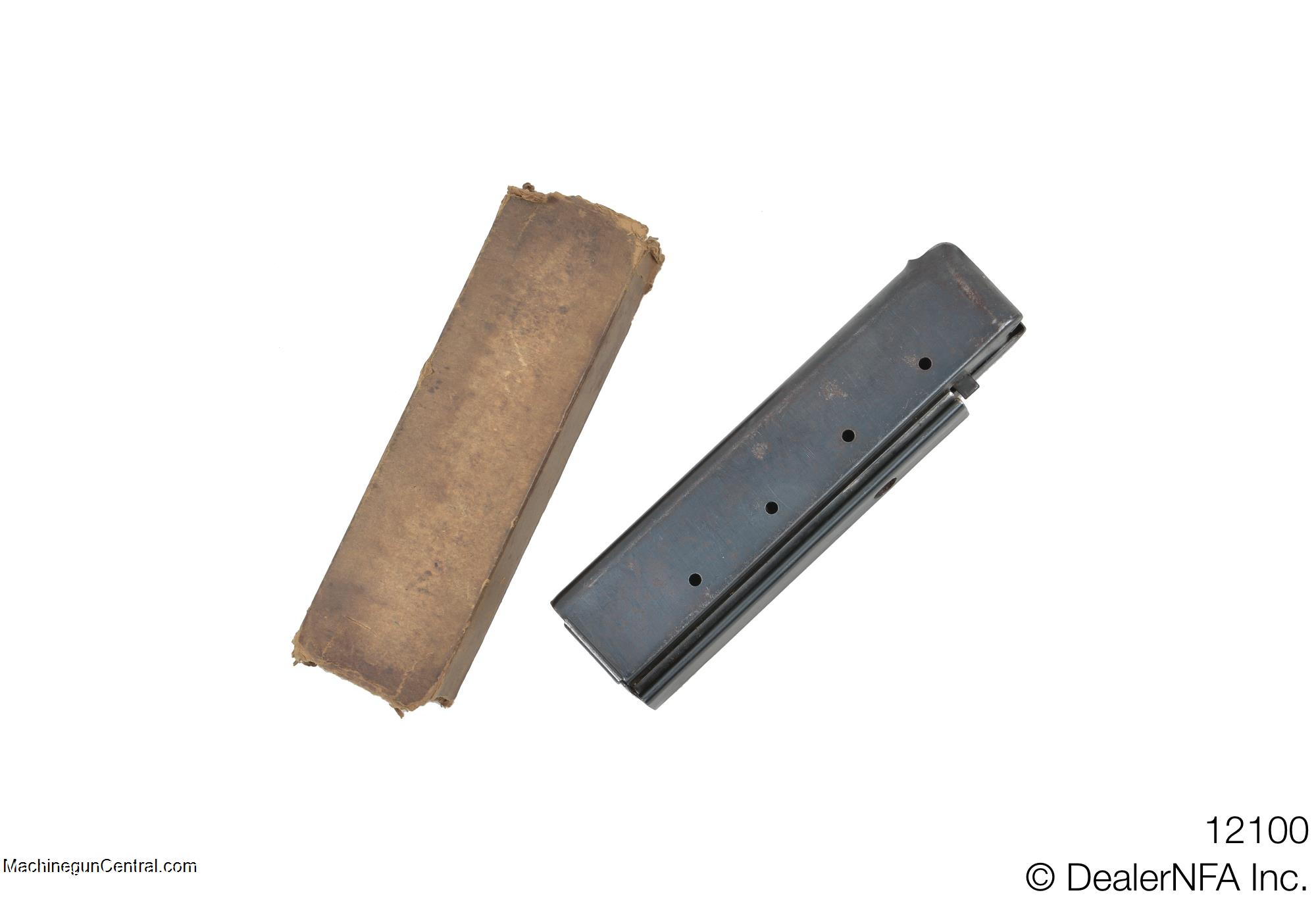 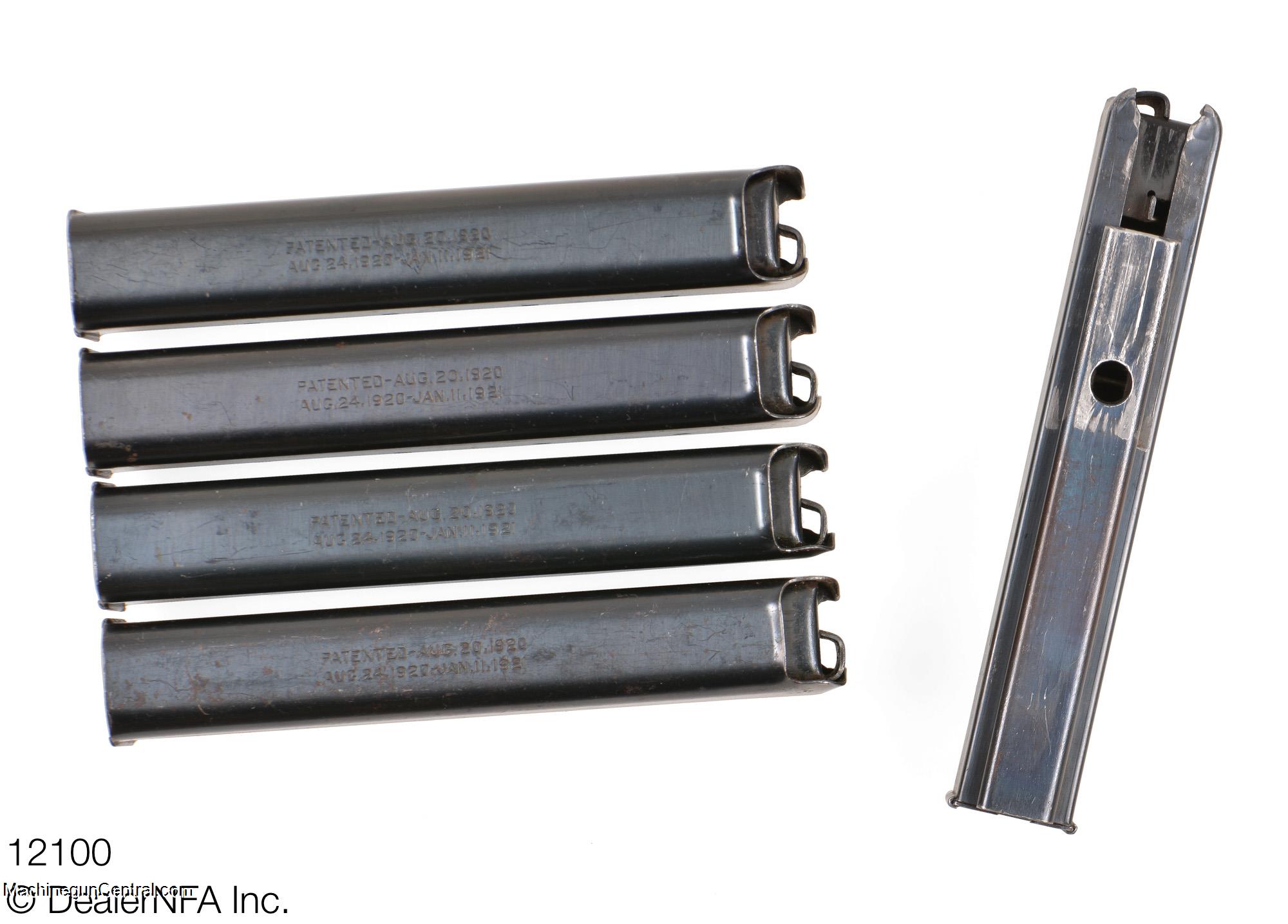 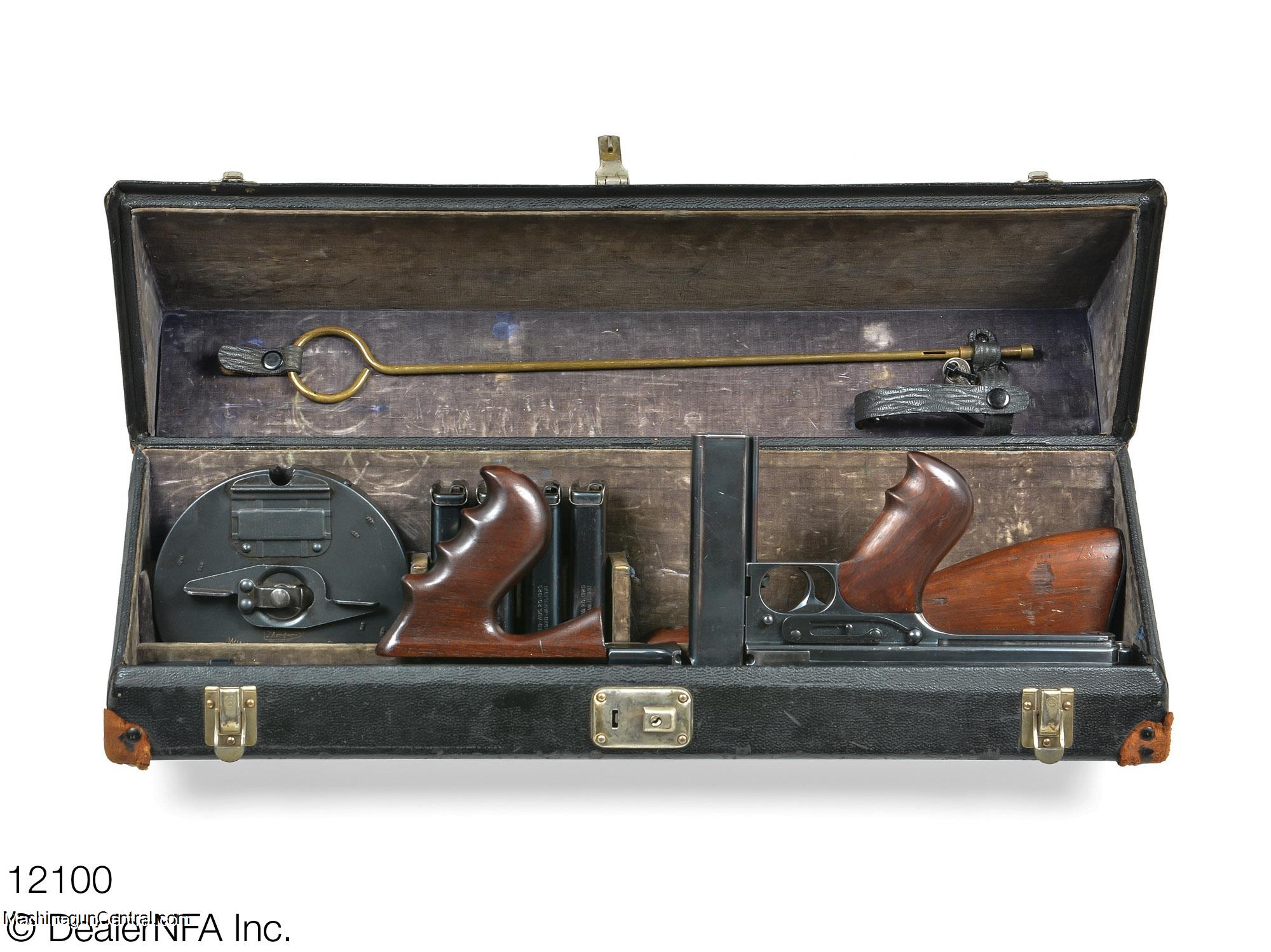 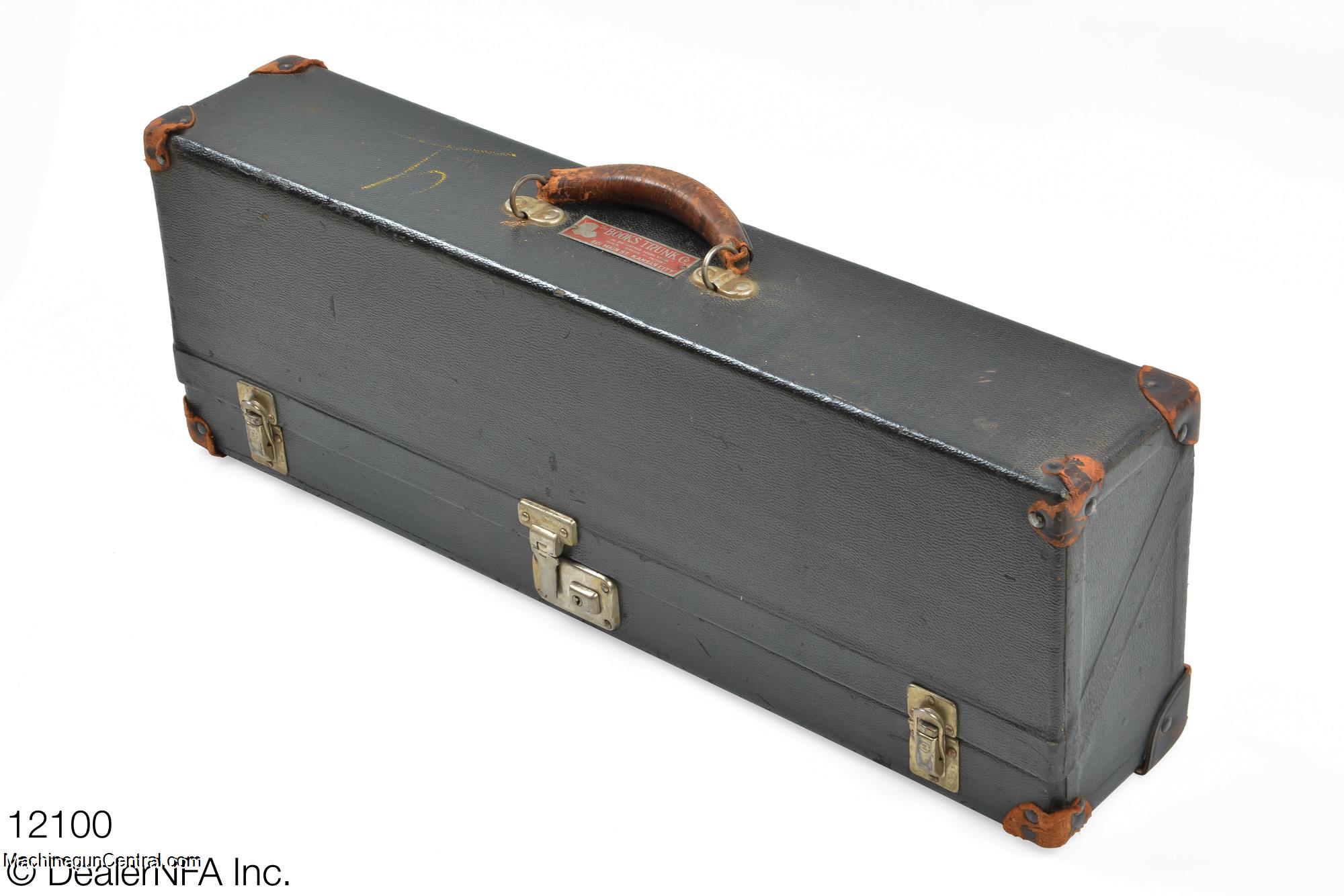 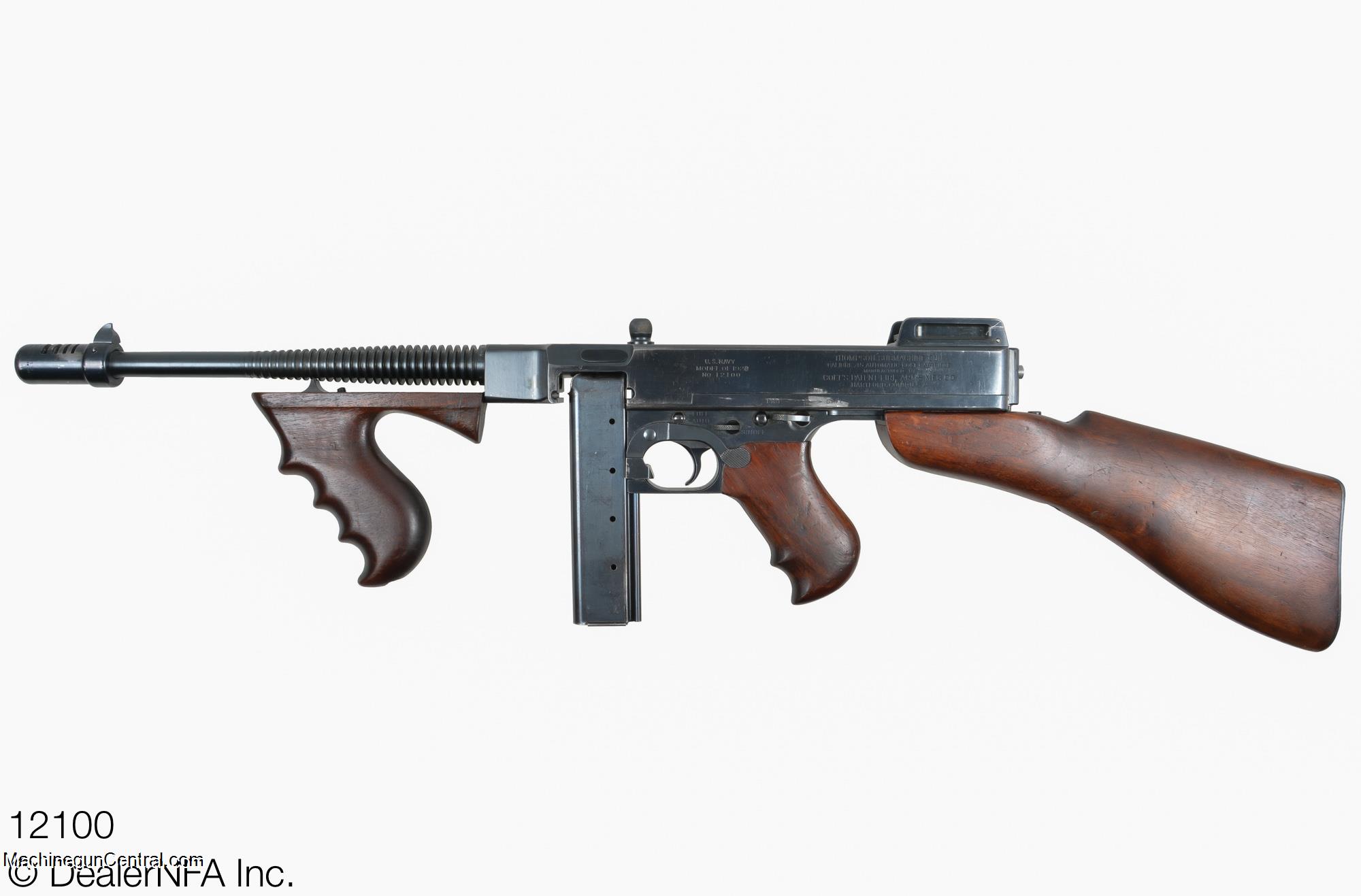 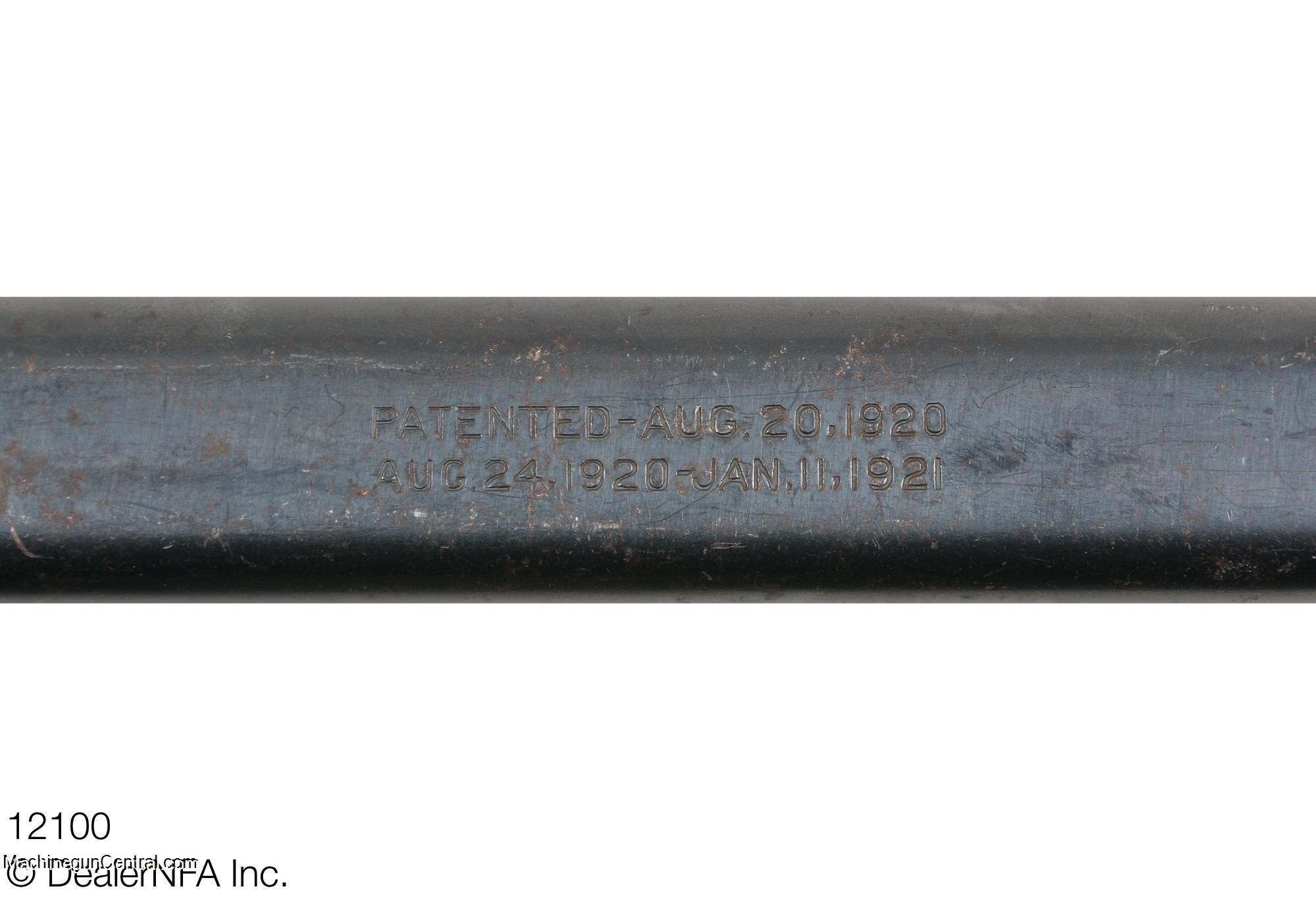 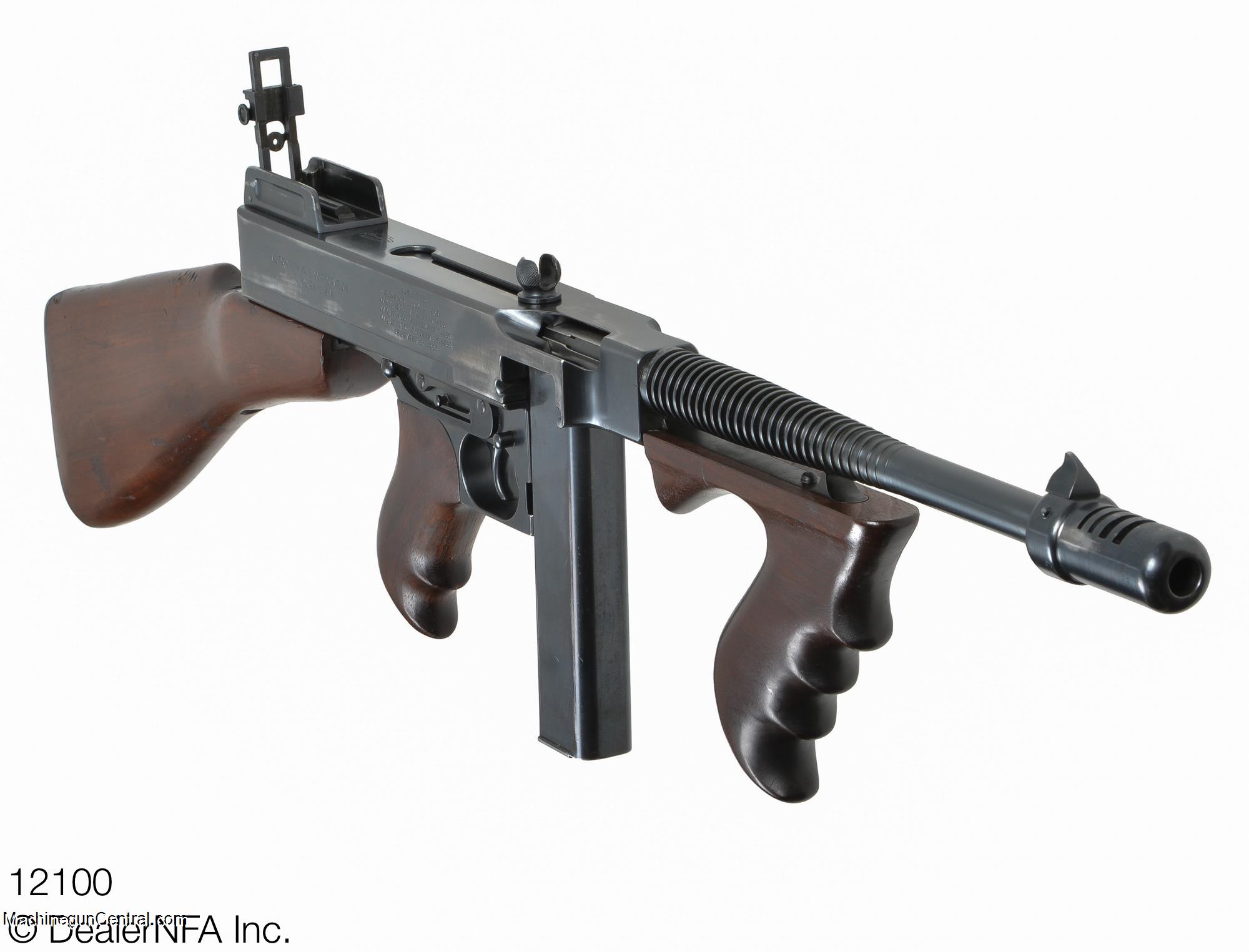 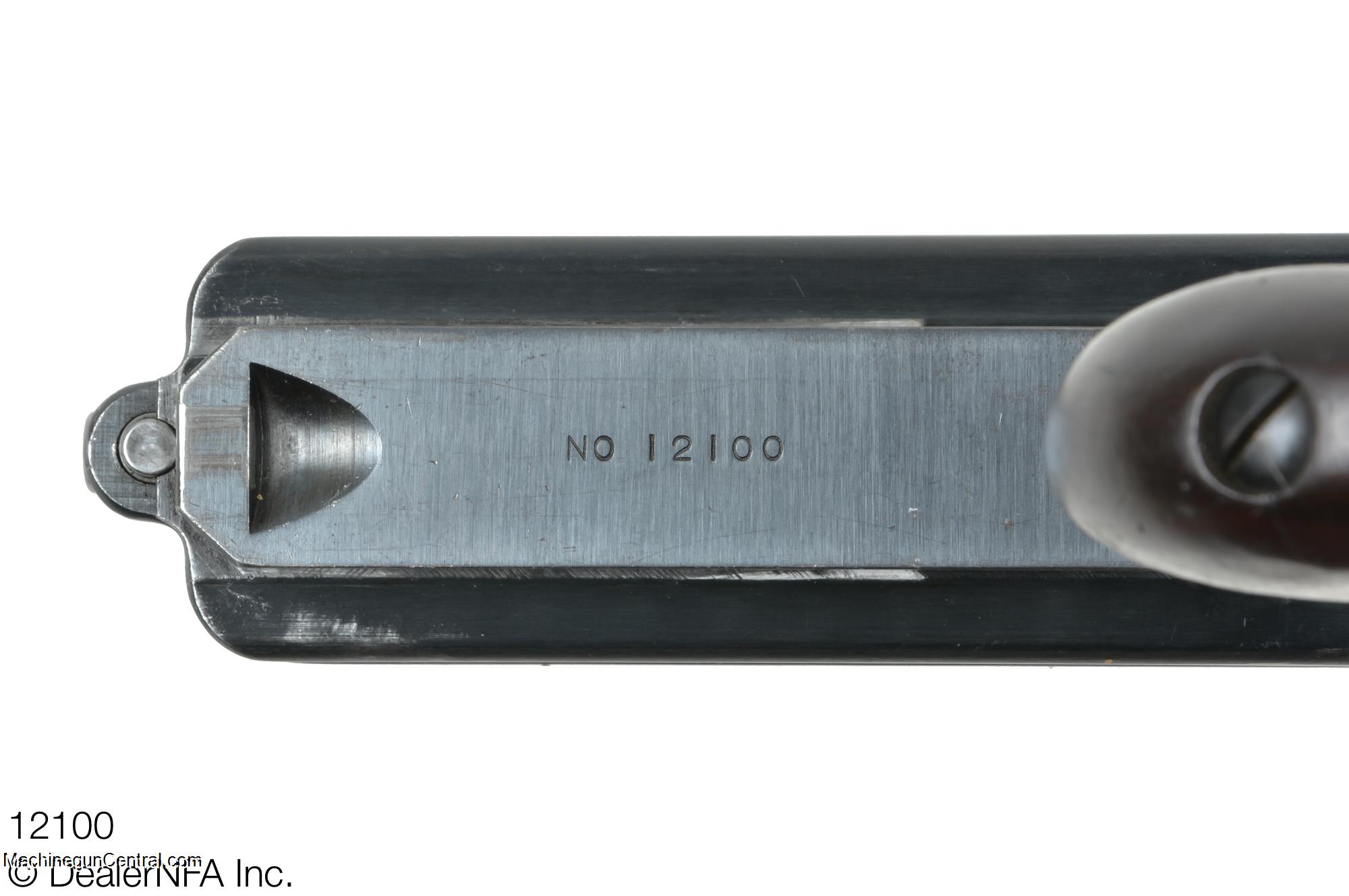 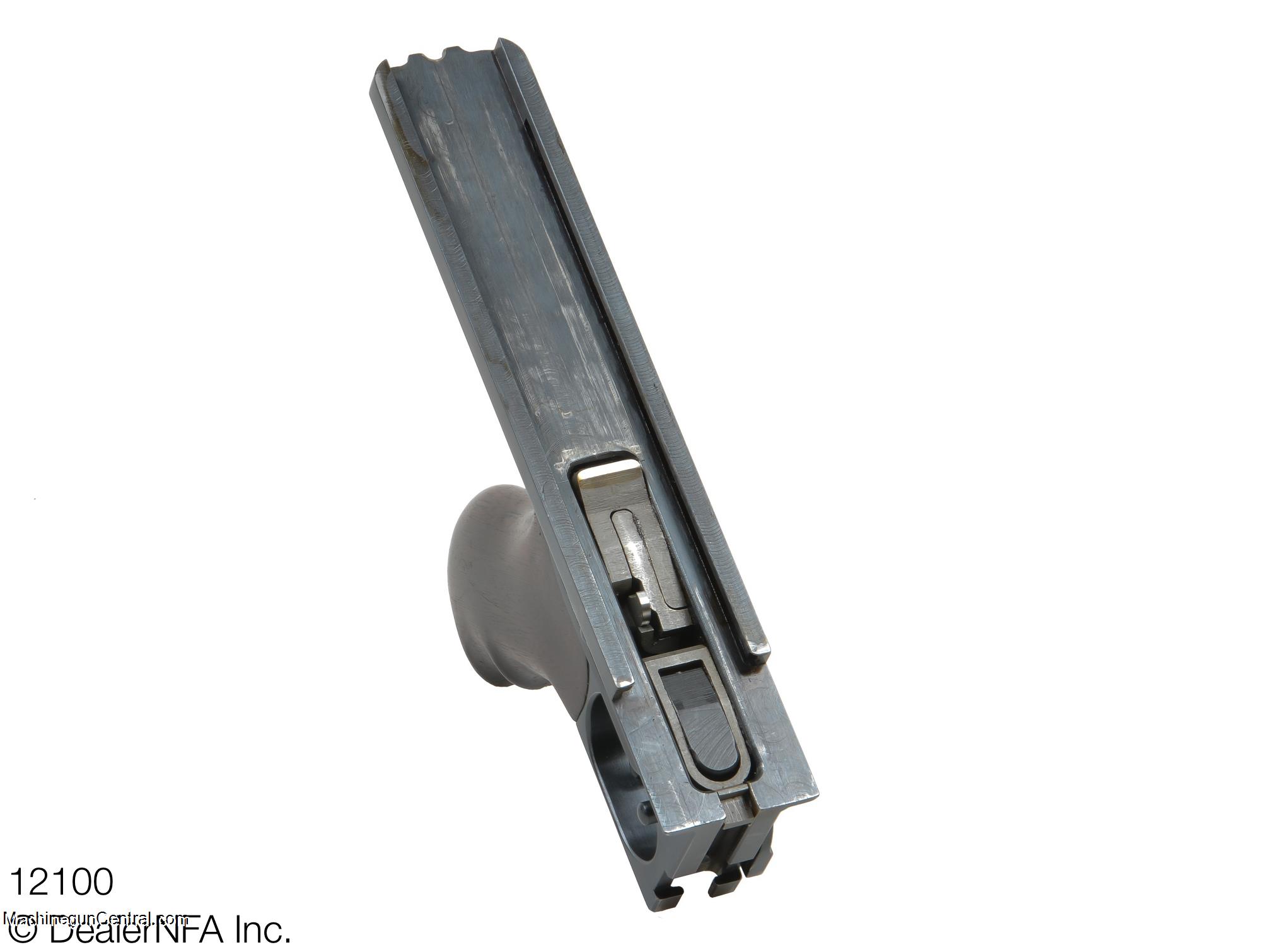 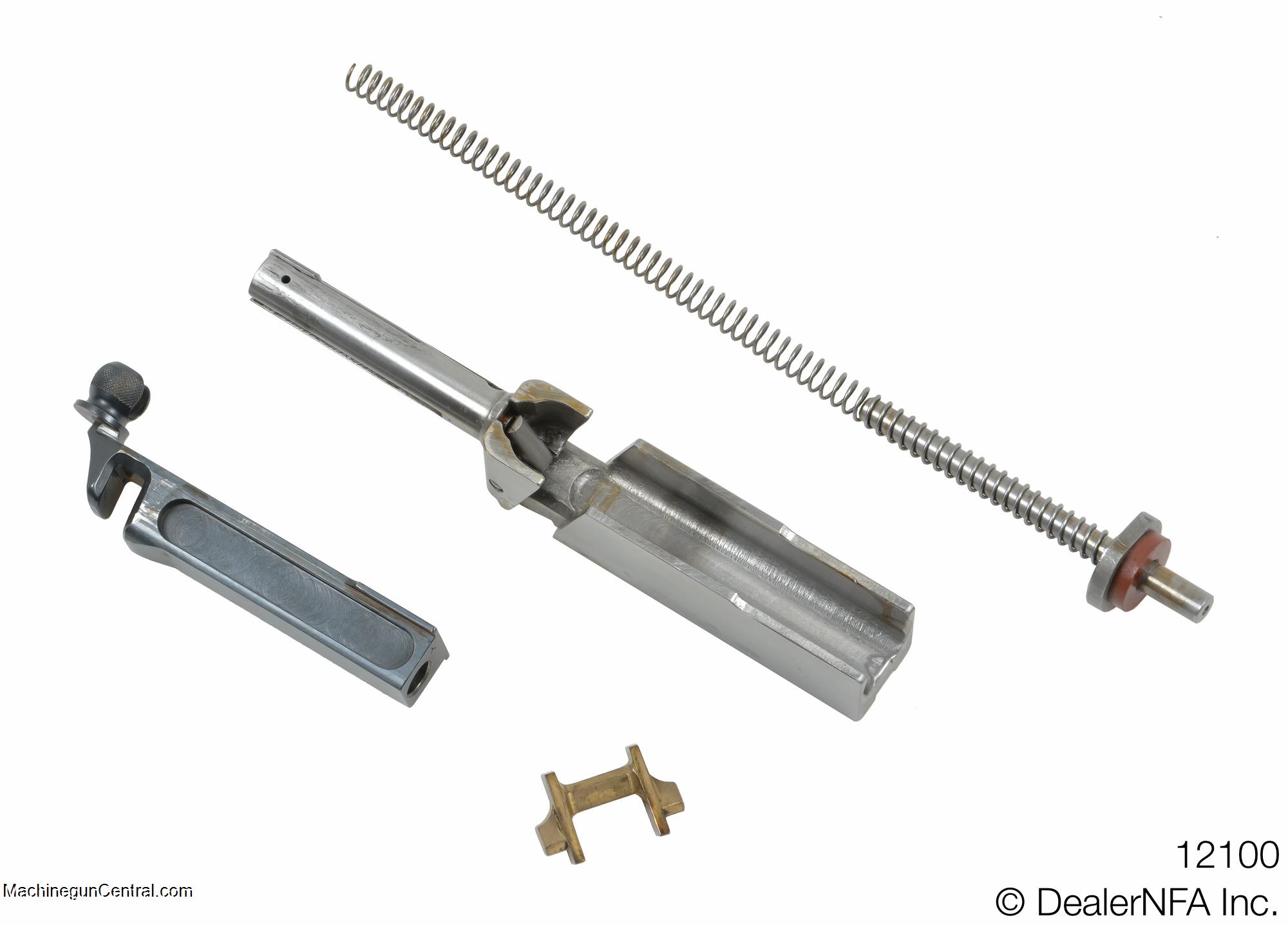 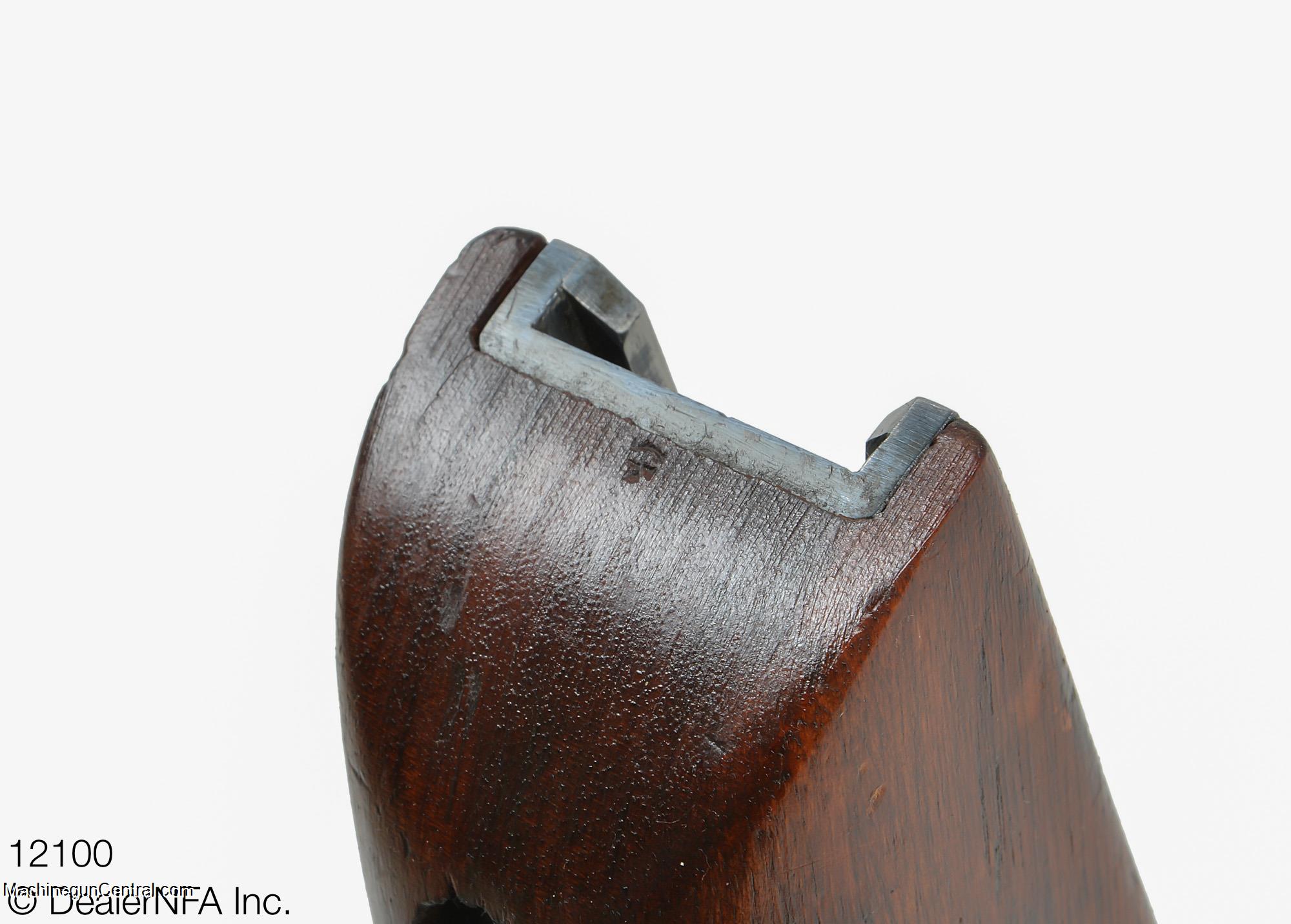 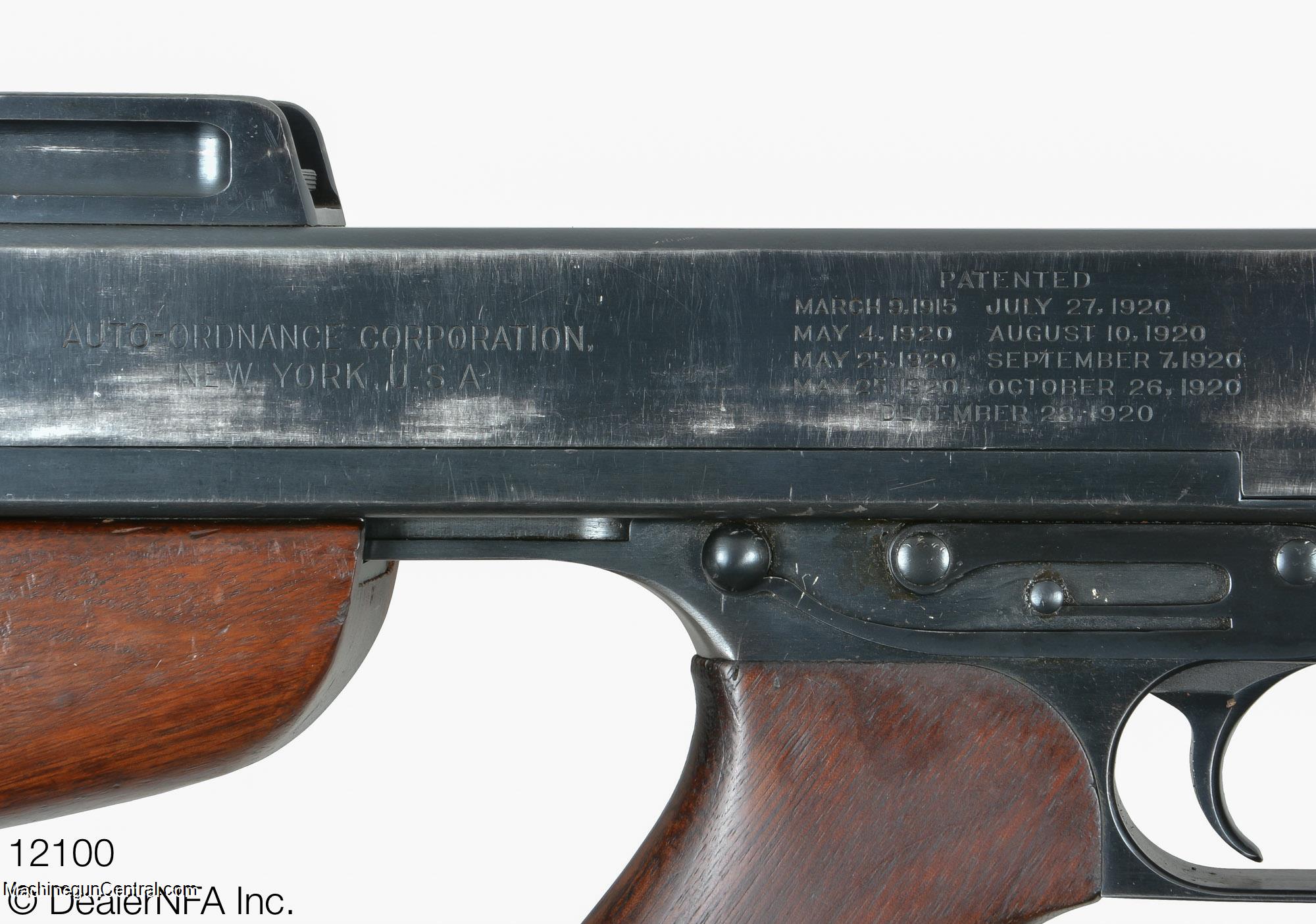 12100 Colt Model of 1928 “Navy Overstamp” Thompson https youtu.be a8infP8uwYM Offered for sale is an Auto-Ordnance Model of 1928 Thompson Submachine Gun, serial number 12100, which was manufactured by Colt’s Patent Firearms Manufacturing Company for the Auto-Ordnance Corporation between June 1, and June 10, 1922.  This is one of the original 15,000 Colt Thompsons, which range in serial number from 41 to 15040.  This model is commonly referred to by collectors as a “Navy Overstamp,” as well as a “Navy Model.”  Colt Thompsons were originally manufactured in 1921A configuration, without a compensator, and were marked “Model of 1921.”  When the U.S. Navy considered a sizeable purchase of Colt Thompsons in the late 1920’s, they wanted the cyclic rate reduced, and a compensator added.  This resulted in the 1928AC configuration, and in addition to the compensator, the original actuator was replaced with a heavier actuator.   The “1” in “Model of 1921” was over-stamped with an “8,” and “U.S. Navy” was added above the model markings. This Thompson configuration was sold to civilian and military entities with the Navy marking, and is the most commonly encountered Colt Thompson model. This particular Thompson was previously owned by the Sedgwick County Sheriff’s Department in Wichita, Kansas, and is listed in Gordon Herigstad’s book, “Colt Thompson Serial Numbers.” He further noted it as being in the collection of a collector in Tennessee in March of 1987.  This Colt Thompson shows significant finish wear, as is common with Thompsons that were used as law enforcement tools.  The receiver and the lower frame serial numbers match.  The buttstock has the correct anchor marking on its nose, indicating it was manufactured by Remington, who was a subcontractor for Colt.  The rear grip, and the vertical foregrip are also original.  The 1928 style actuator is the later, one-piece variety, marked with a “Y.”  These “Y” marked actuators were manufactured by an unknown company for Auto-Ordnance during the Colt era, and tend to be found on 1928 Colt models in the upper serial number range.  They are a subject of further research among the Thompson collector community to determine their manufacturing origin.  All other internals appear original. The barrel has British proofs on it, as well as a “NITRO” marking at the base of the barrel, indicating that at some point during its life, the original barrel was likely replaced by another barrel that had been through Britain.  Nevertheless, the barrel is correct for a Colt era Thompson.  The right side of the receiver features the expected “JHB” inspector marking, indicating inspection for Auto-Ordnance by Chief Inspector John H. Barrett. Included with this Colt are a number of accessories, including an original and scarce Books Trunk Company FBI style case, with a key.  Books Trunk Company made cases in Kansas City, MO in the 1930’s, and are less commonly encountered than other FBI cases.  They are collector items unto themselves.  Considering that Kansas City was the closest source for FBI style cases to the Sedgwick County Sheriff’s Department, its acquisition by that law enforcement agency makes sense.  Also included are 4 original patent date XX (20-round) magazines, including one with its original cardboard sleeve.  Most cardboard sleeves were thrown away, so having a surviving example is a real plus.  The sleeved magazine shows some corrosion from having been stored in the cardboard sleeve for many decades.  There are a total of 5 XX magazines included.  The other magazine is a “blank” Colt era magazine, meaning that it does not have any external markings, and was likely a transitional magazine from just after Russel Maguire acquired Auto-Ordnance in 1939.  A Colt era long cleaning rod is also included, which is a valuable and difficult to find accessory.  One WWII era L-drum (50-round) is also included, which is a Universal Metal Stamping Co., Bridgeport address type. Also included with this Colt Thompson are four reproduction paper items, including a reproduction1923 Auto-Ordnance Catalog, a reproduction 1936 Auto-Ordnance Catalog, as well as two reproduction Department of Justice cards for John Dillinger, and Bonnie & Clyde.  A pair of handcuffs, and a Sedgwick County Sheriffs Department patch and badge are also included. Police Department Colt Thompsons are desirable collector items, and with this Colt having served the State of Kansas, its provenance makes it an example that any Thompson collector would be happy to add to their collection, or it could also be a first Thompson for a new collector to cherish and shoot.  It also has several very desirable accessories that go along with it.  This is a prime opportunity to own a Colt Thompson setup that served “On The Side of Law and Order.” $38,495 As with all DealerNFA, Inc. guns, this item is owned by us, and in stock at our Miami office, where it is available for inspection or eForm transfer to a dealer in your state. Florida residents are subject to Florida Sales tax. Dealernfa, Inc Ruben Mendiola President For the quickest response, please contact us through our toll free number from 8 00 AM to 9 00 PM (Eastern) or by email. 305-271-3436 866-NFA-WANT (866-632-9268) Toll Free 866-415-7066 Toll Free Fax Please visit our website for more detailed images that can be magnified at dealernfa.com  Facebook Instagram Always looking for and paying top dollar for high quality legally registered machine gun, please either call me on my Toll Free line, email or fax. I pay the ATF transfer tax and payment is sent overnight. Class III Dealer since 1985. Dealing with high quality legal firearms is not a hobby but my profession; you will receive well deserved fast professional service. Serving you personally 7 days a week from 8 00 AM to 9 00 PM (Eastern)

This form sends an email to the lister: Dealer NFA. Inc regarding listing #1735200