One of the most beautiful things about the Model 2020 Waypoint hunting rifle is its weight. The rifle is ultra-lightweight, and it's also pretty easy on the eyes. The Waypoint is extremely light for hunters. That way, getting your rifle in a backpack to hike 6 miles into the backcountry doesn't kill your back. It will also make the rifle easier to get up into tree stands. When you have a rifle as light as the Waypoint, it can feel like a sin to attach any gear to it. Like you are almost ruining the very reason many have sought out the rifle. Magnified optics and bipods can be really heavy, so they can begin to weigh down a rifle. But perhaps the heaviest attachment that really throws off a rifle's balance, and is a more and more popular hunting tool, is the sound suppressor. Suppressors are used by law enforcement and special forces military units all across the world in an effort to mask their position when firing.

Why use a Suppressor? 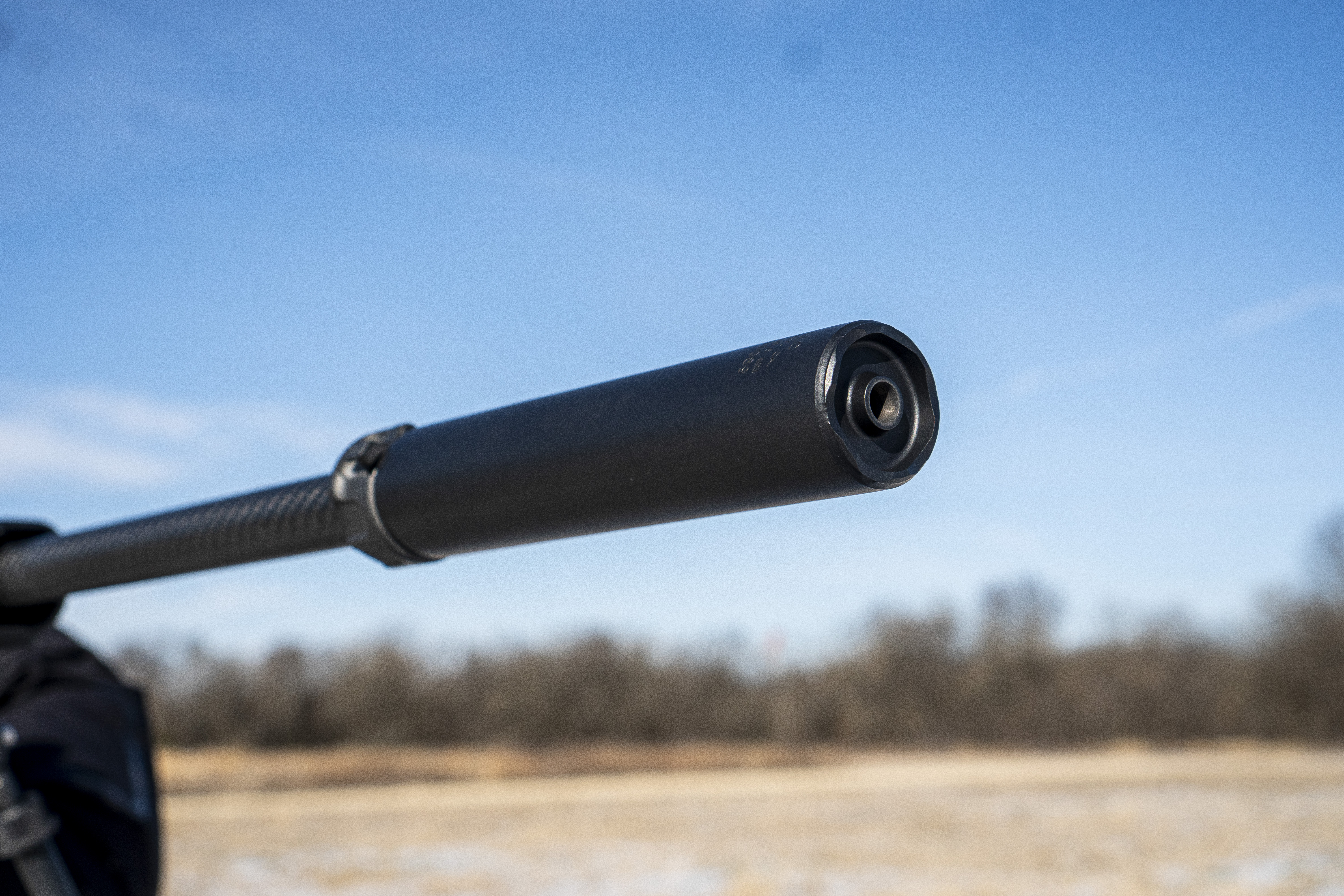 These devices can help keep the men and women who serve safer from threats. In hunting, world suppressors have become almost a necessity for a few reasons. The absolute biggest is that it reduces the decibel rating heard in the shooter's ear. This makes shooting without ear protection much safer. When hunting, every hunter I know wants to be able to sit quietly and hear with their natural ears the sounds around them. Hunting is all about being in tune with your surroundings, and ear protection with microphones to amplify sounds so that you can still hear through them can distort the hunter's perception of the world around them. The problem when you have a gun like a Waypoint is that even a 1-pound suppressor will completely throw off the weight of the rifle. Part of this is because of the weight of a suppressor and then also the fact that all the extra weight is out at the end of the gun, making it even feel heavier.

The solution, of course, is to find a light suppressor to keep the weight down. There will be several options, I'm sure, but we ended up finding a solution from Surefire. We have on hand a 6.5 Creedmore Model 2020 Waypoint. So for us, we actually used Surefire's dedicated 6.5 Creedmoor Suppressor, but the treat was that we got in the titanium model. Titanium is strong, and it's around 45% lighter than stainless steel, which is used in quite a few suppressors. Titanium is also, in fact, stronger than stainless steel; stainless must be thicker to get the same strength as titanium.

Surefire's SOCOM65-Ti is the lightest rifle-mount suppressor that the company makes. The suppressor was designed to exceed military sniper rifle suppressor specifications; the SOCOM65-Ti is a suppressor optimized for bolt-action 6mm, 6.5mm, and .260 caliber weapons. Those calibers are increasingly popular for hunting now, making this a popular choice for hunting especially coupled with its lightweight.

The suppressor itself has the tight tolerances and quality that you've come to expect from Surefire, and it attaches using the versatile Fast-Attach mounting system from Surefire. The suppressor, like all Surefire suppressors, is proudly manufactured and designed right here in the good ol' United States of America.

We have had the SOCOM65-Ti for a bit now, so we took it out on the range to check out how well it did. We decided to see how it affected the zero of the Waypoint, so we zeroed the rifle with just the Fast-Attach muzzle brake from Surefire, and then we attached the SOCOM65-Ti to see how it did. We only noticed maybe a .5 MOA shift in our impacts, a small enough margin that it could be just human error induced or temperature related as our cold rifle on the 20-degree day warmed up through our range session. The point being, if you're trying to shoot a dime at 100 yards, yeah, you might want to re-zero, but for any hunting application, it was still an accurate enough point of impact to smoke any North American game animal.

The second thing we wanted to test was how quickly the suppressor could cool down. So we fired ten rounds in fairly rapid succession to build up heat in the suppressor. The suppressor, as you'd imagine, was way too hot to touch. From there, we wanted to see how long it took to touch it by hand. At about the 7-minute mark, it was comfortable to touch by hand. Now, this isn't a super scientific test, it was 20 degrees out, and we didn't have comparable a non-titanium suppressor to do back-to-back tests with. In theory, a suppressor with less material would cool faster, so titanium could cool faster, but at the end of the day, I'm not a scientist, so take that for what it's worth. Also, if it's a summer day and it's 98 degrees, the suppressor would likely not cool as fast as a cold 20-degree day as we had. 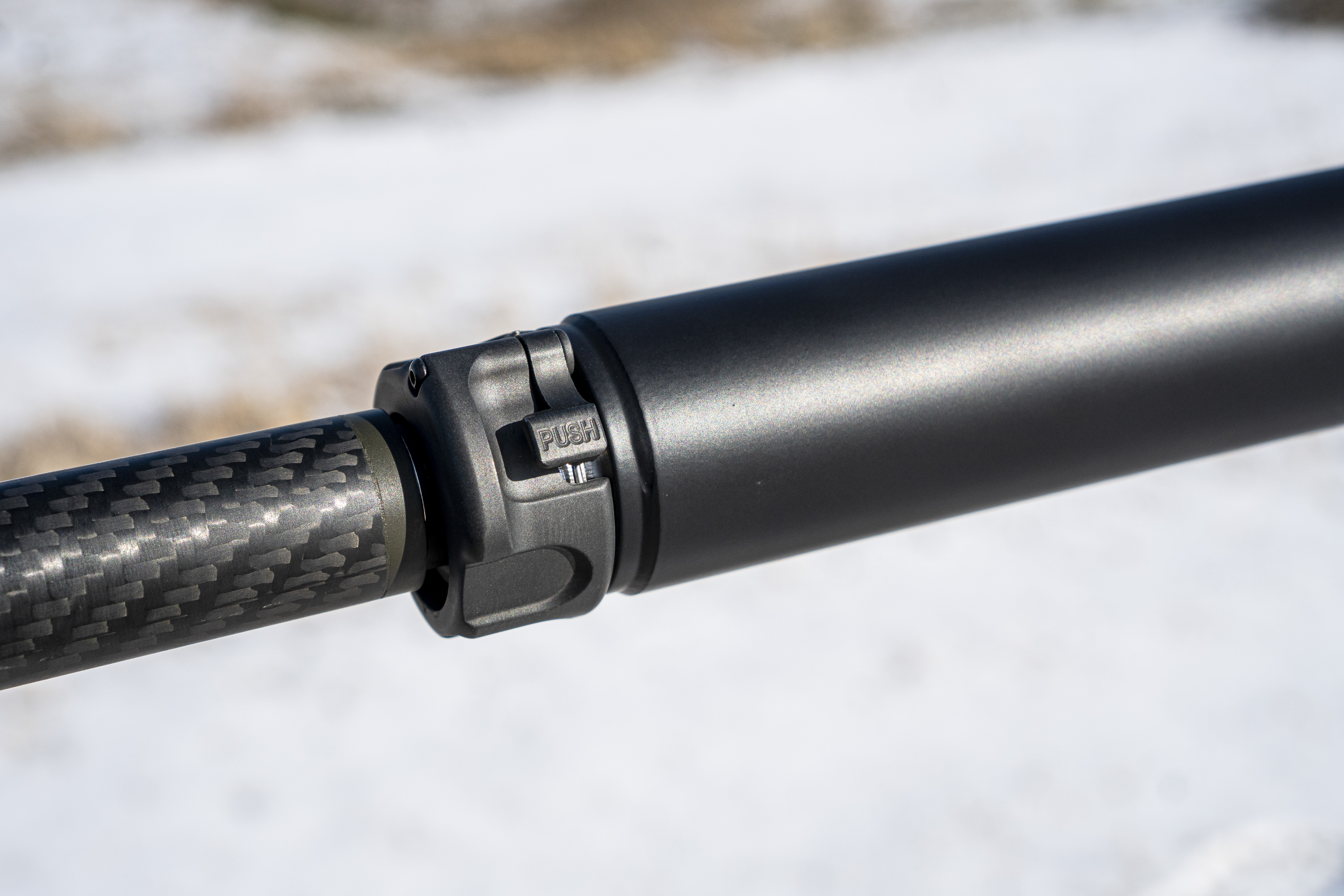 All in all, the SOCOM65-Ti is a durable suppressor, and it's the lightest weight rifle suppressor Surefire has ever made. I can't stress how light this suppressor is, coming in at just about .6 pounds. Its weight almost feels like it's a toy made of plastic, but the surface is undeniably rigid and made of metal. We tip our hats to Surefire for a well-made suppressor that's weight makes it seem like a product from out of this world.