We have spent some time with the Hellcat Pro at GunSpot. Grant has spent a lot of time with it, enough to have over 4,000 rounds on one. The Hellcat Pro has proven to be a gun capable of more accuracy than most shooters will be able to even take advantage of. I have no doubt that if the Hellcat Pro were in a lab setting that it could shoot tight groups at 200 yards with quality ammo. For most, shooting a pistol like the Hellcat Pro (3.7" barrel), human error will end up foiling those groups. But just for the heck of it, we decided to see how far we could land hits on a 30" x18" steel silhouette. We came up with a "game" if you want to think of it that way. It's important to say we are still being safe and practicing proper gun safety. The idea of our challenge is to first make sure we have a good 10-yard zero on our Hellcat Pro, then shoot at 25 yards. If we get a hit, we move it back 25 yards until we no longer could produce quality hits. At each distance, we will fire standing offhand and shoot five rounds. This is a fun exercise that keeps ammo usage low and lets you challenge your brain, and lets you really work on how you pull your trigger.

We made sure to have all the same ammunition for our test. We chose to zero the Hellcat Pro at 10 yards; this is the distance Grant usually does personally, and then he shoots a confirmation group at 25 yards. Our first test at the range will be a distance of 25 yards, so that works out! For this project, we used Remington 115 Gr. UMC ammunition that Remington thankfully provided for this project. We can't thank Remington enough for helping us secure enough rounds for our test. 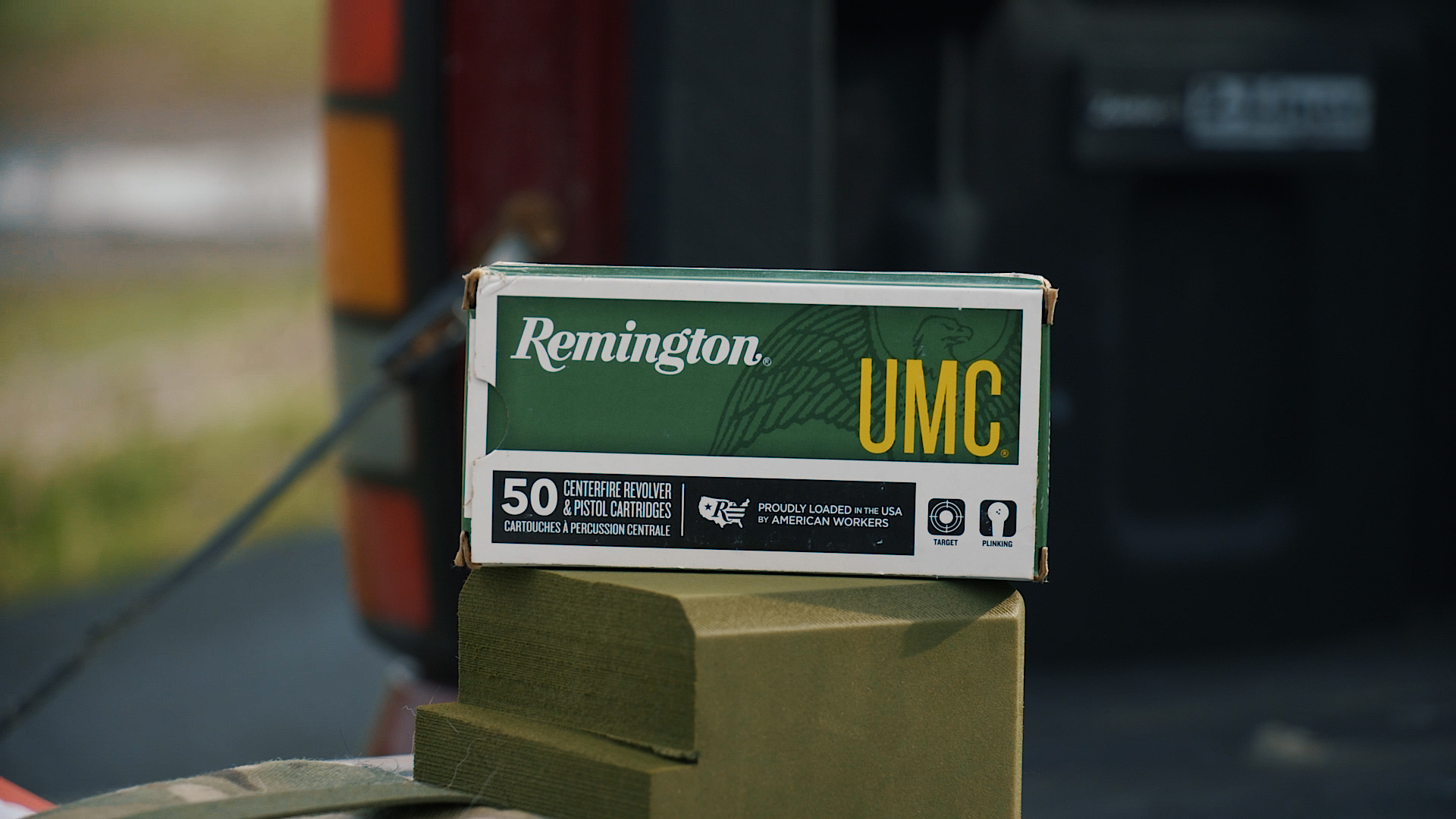 Then we set up a quick place to rest the gun 10 yards away from the target. Grant cut a foam yoga block and used a small sandbag to build a stable shooting platform. From there, he fired a few slow concentrated fire shots onto a paper target. Taking note of the impacts and making adjustments as needed. Once Grant had a tight zero, we moved back to 25. 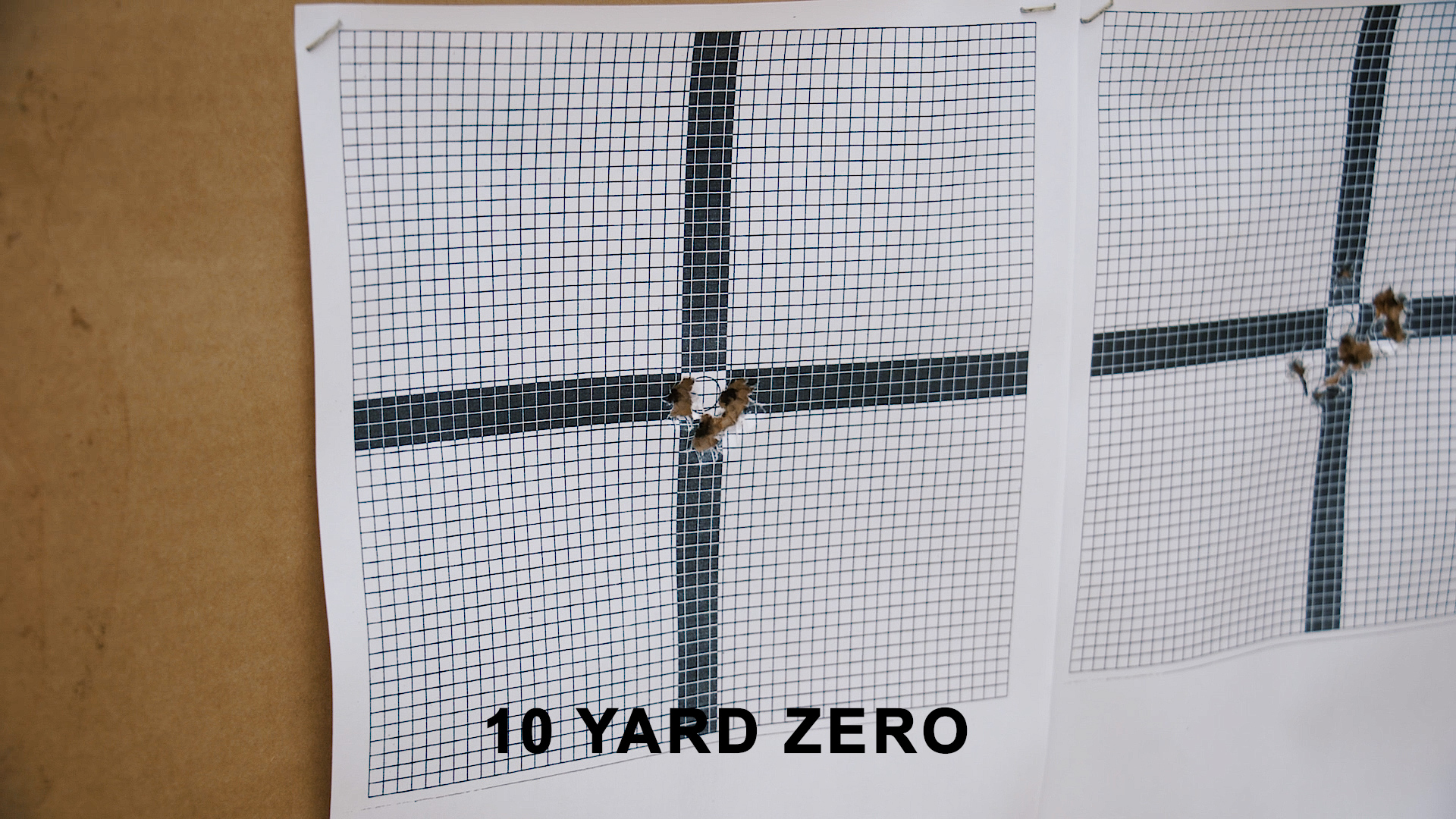 Once scooted back to 25 yards, it was easy to shoot a tight group. Twenty-five yards is probably on the longer end of where most pistol gunfights would occur. In reality, past this point, most people, whether the bad guy or the good guy with his concealed carry pistol, will not engage and might likely run. Obviously, there are exceptions to this, but at 25 yards, when it comes to fighting or flight, I'd bet most humans' instincts will trigger the flight response. Nonetheless, all five shots made a tight group at 25 yards. 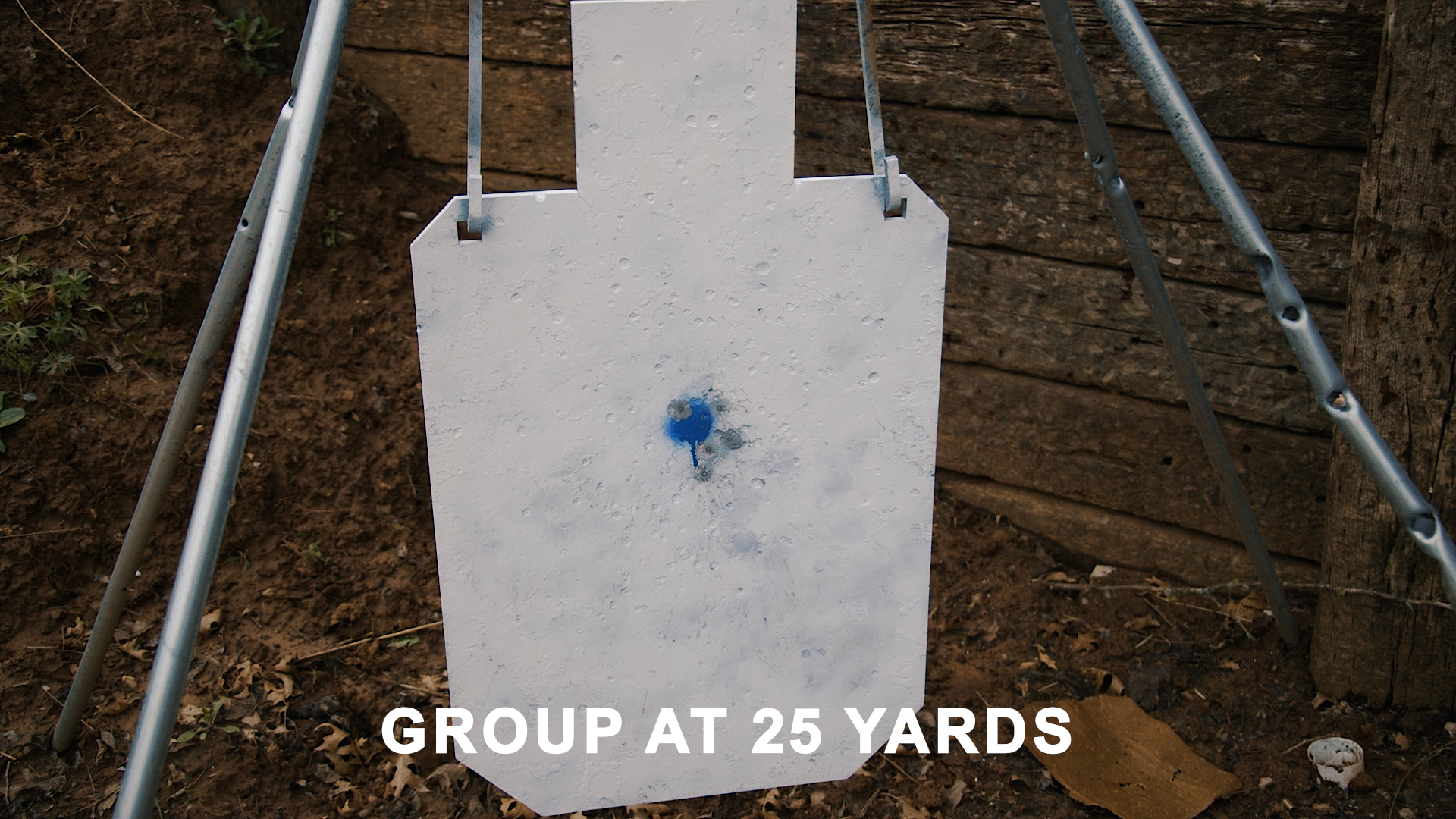 At 50 yards, we saw the group start to open up. The Hellcat Pro is way more capable than most shooters, including us. So here at 50 yards, Grant started to see some human error introduced into shots creating a group of about 6 inches with a few shots landing right of his intended point of impact. But with another hit and 5 out of 5 total hits, it was time to step it back to 75 yards. 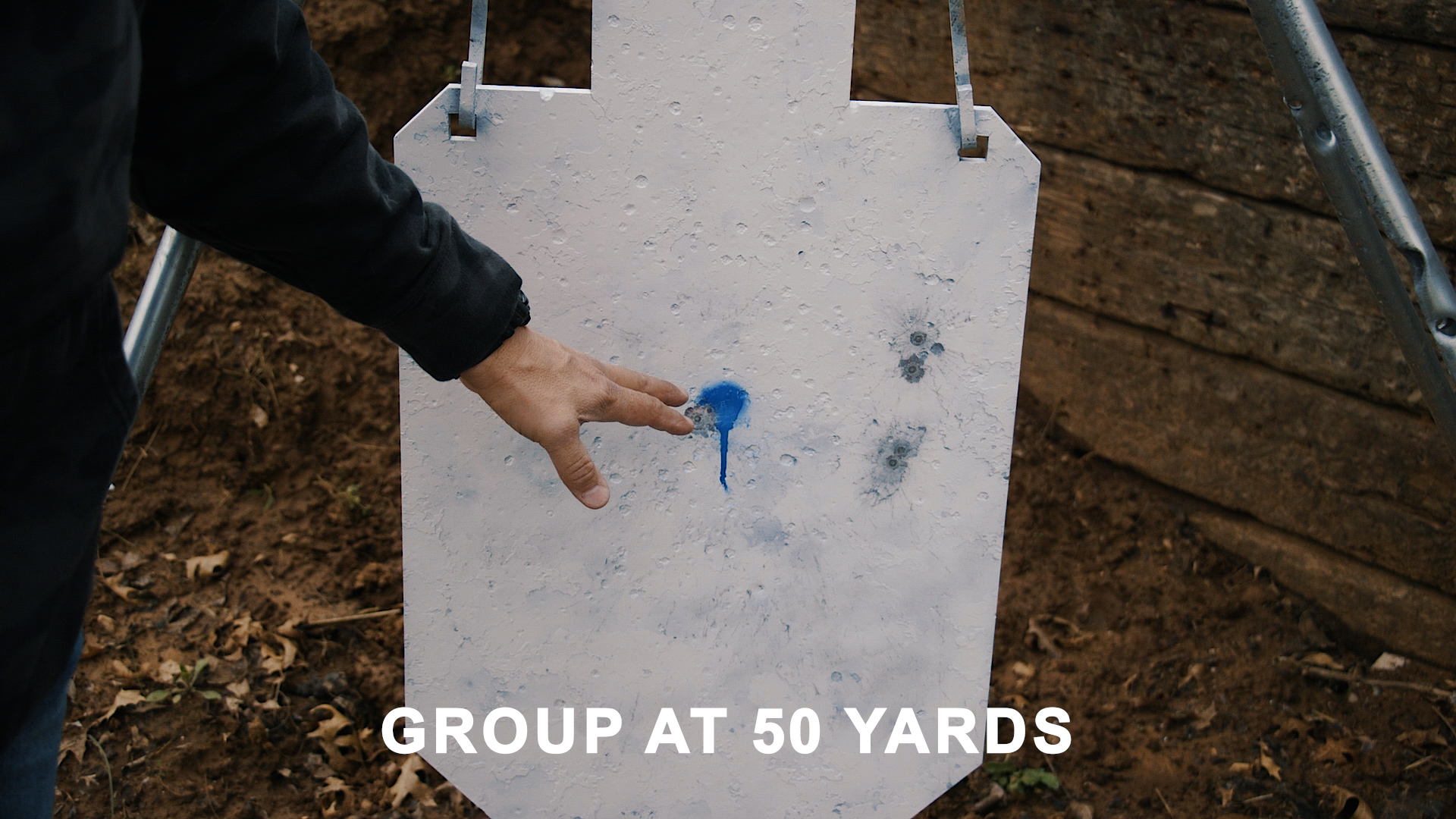 Now we moved it back to 75 yards. It's hard to keep track of rounds once your competitive spirit kicks in. So naturally, Grant got trigger-happy, firing six total shots and hitting 4 of the 6. He shot a great first hit right below his intended point of impact, and I think the thrill and fun got to him as he fired an extra shot. So again, the Grant and the Hellcat succeed and move back to 100 yards. 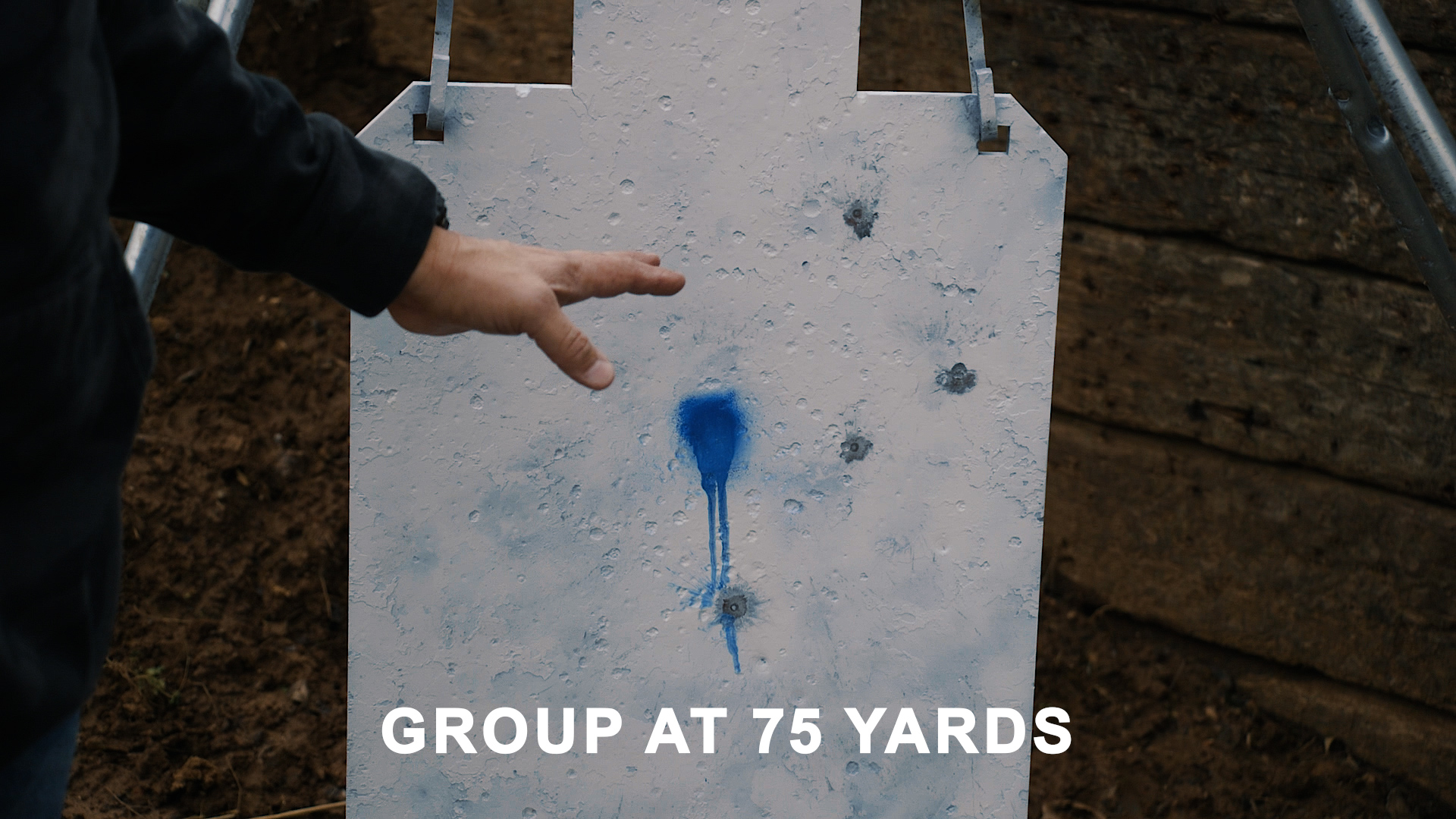 Back at 100 yards, Grant hit his first shot, missed the second, hit 3 and 4, and missed shot number 5. This group ended up being all good torso hits with around an 8" spread. At 100 yards, the slightest bit of human flinch and wind pushing on your body is enough to cause a missed shot. From here, of course, it only got tougher. 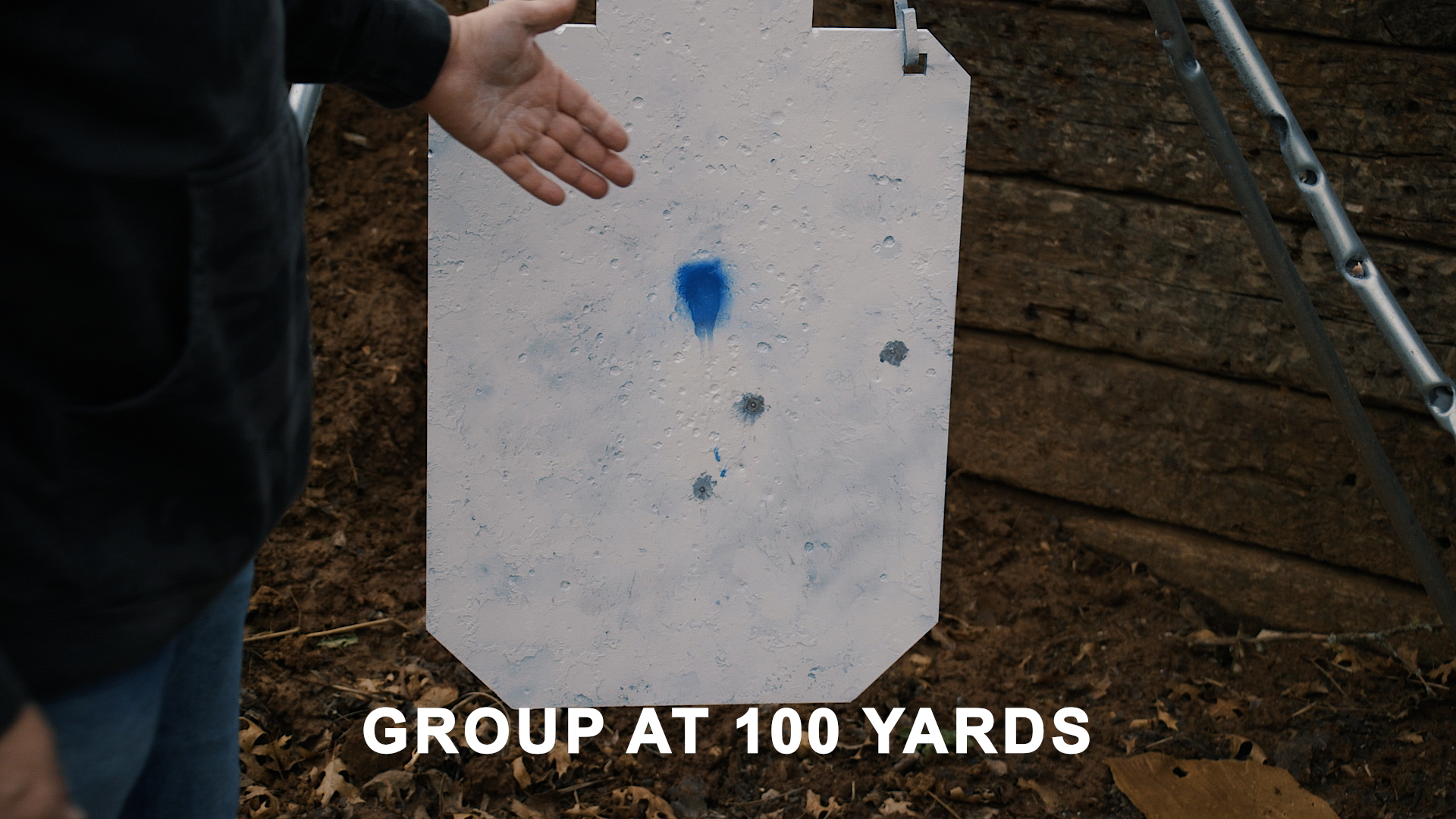 This one was crazy. Grant moved back to 125 yards and fired five total shots again. This time he hit the first 4 in a row and missed his 5th shot. His holdover was high enough that he missed a center torso shot but ended up having two headshots, one in the shoulder, and the 4th must have been a pair somewhere. We heard the ding on the steel of the 4th but could not see a separate impact leaving us to believe it must have been a pair. Since we got one hit, a total of 4, we stepped back to 150 yards. 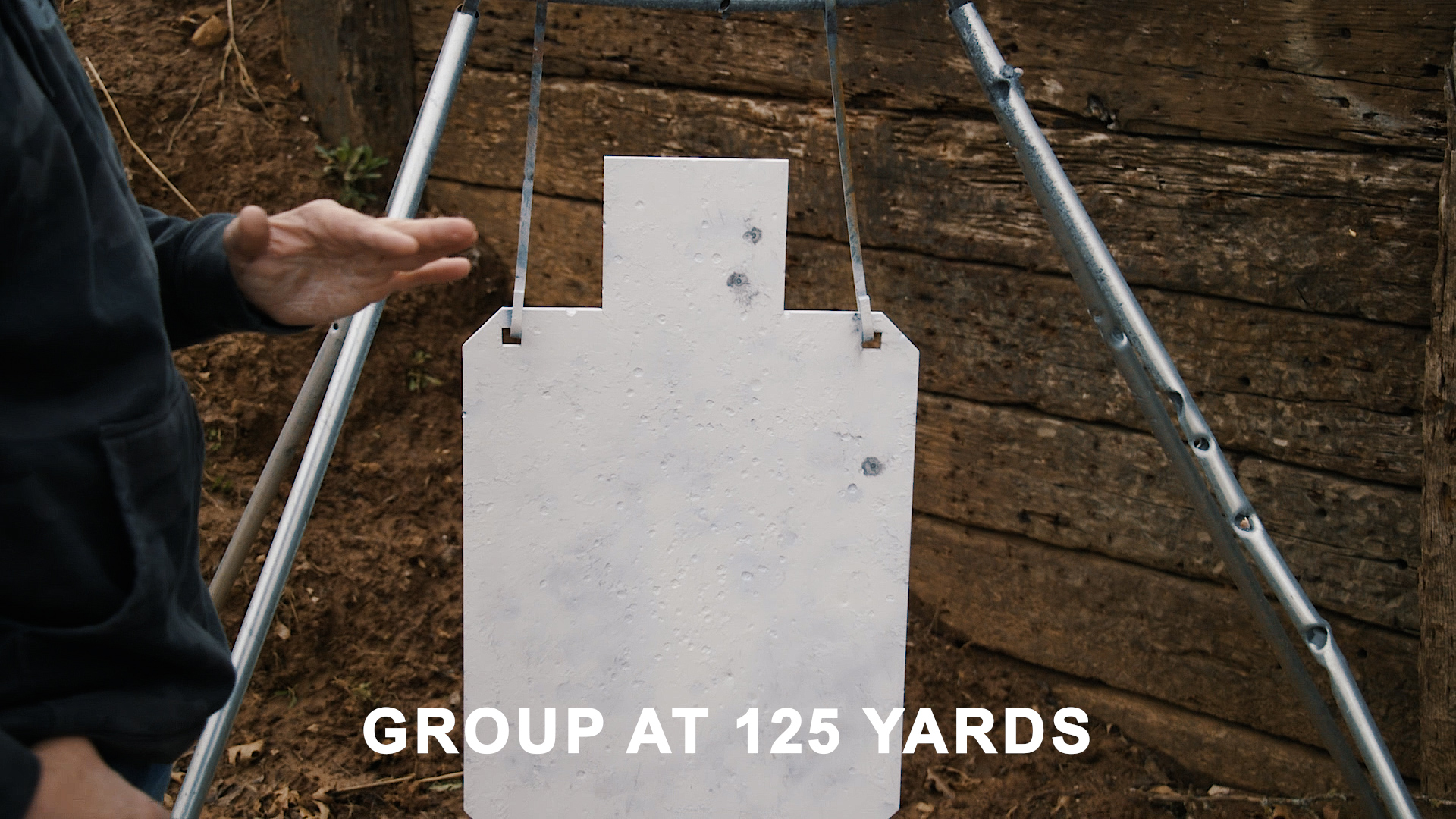 At 150 yards, we started to notice a big dip in what we were capable of. Grant shot five shots as usual and missed the first 2, hit the middle shot, and missed the last two. The one-hit Grant produced was in the bottom left of the steel silhouette, almost completely in the bottom corner. But that still gave us one hit, which meant it was time to step it back all the way to 175 yards. 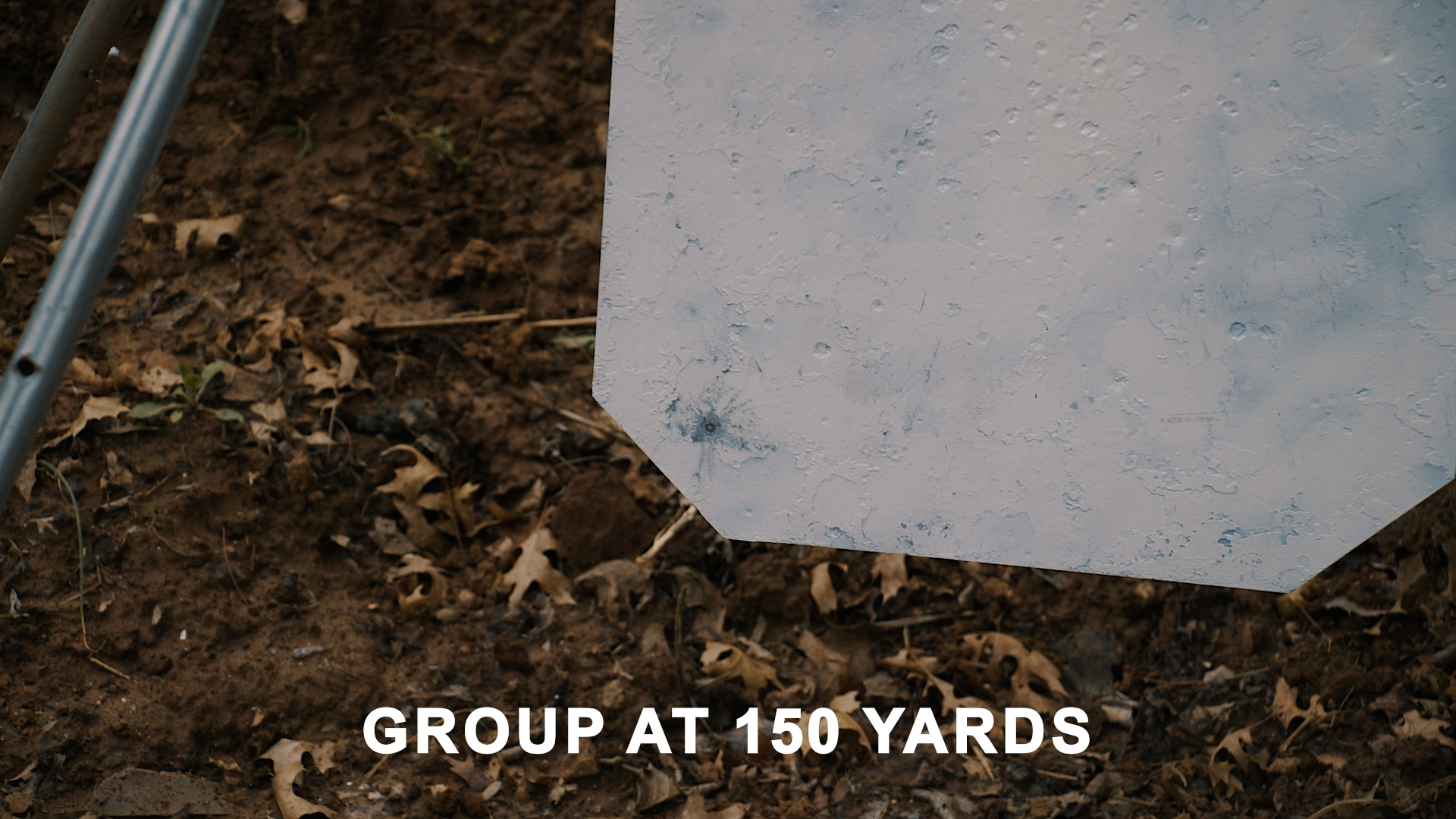 I don't know of anyone in history who took a kill shot with a 3.7" barrel, concealed carry pistol chambered in 9mm. In fact, shots at that distance are more than likely not going to be considered self-defense in a court of law. So again, this distance is extreme for the Hellcat Pro, but we like to live on the edge, so here goes nothing. Grant shot five and missed all 5. Then the fun part happened.

I (Dylan) decided, "what the heck?" I will give it a shot. So I had Grant film me, and I missed the first and landed with the second shot! So we were still able to get hits on steel at 175 yards with the Hellcat Pro.

As I said at the beginning, most of the distances in this are not even applicable to handgun combat. These are more fitting to carbine and rifle ranges. But it can be fun to take a pistol like the Hellcat Pro that is intended for everyday carry, not a gun that was intended to be a combat pistol for armed forces or a competition shooting pistol, and push it to its limits. More accurately, it pushes you to your limits because 9/10 times, the pistol can outperform the shooter. The Hellcat Pro is capable of much more than we were able to do with it, but we had a great time challenging ourselves and simply having fun on the range.